c1716-94. He was born at Hertford, the son of an alderman, Edward Hughes, and of his wife, Elizabeth Chichele.

On 4 January 1735 Hughes entered the navy aboard the newly commissioned Dunkirk 60, bearing the broad pennant of Commodore Digby Dent and serving at Jamaica. In September 1736 he removed on that station to the Kinsale 40, Captain John Forrester, and in July 1738 to the Diamond 40, Captain Charles Knowles, serving at the reduction of Porto Bello in November of the following year. In February 1740 he joined Vice-Admiral Edward Vernon s flagship, the Burford 70, Captain Thomas Watson.

On 25 August 1740 he was commissioned lieutenant of the fireship Cumberland, Commander Robert Maynard, and in the following year he was present aboard the Suffolk 70, Captain Thomas Danvers, at the bombardment of Cartagena on the northern coast of South America. During June 1741 he moved to the Dunkirk 60, Captains Thomas Cooper and Charles Wager Purvis, in which he was present at the action off Toulon on 11 February 1744. In July of that year he joined the Stirling Castle 70, Captain Thomas Cooper, and following that officer s cashiering for failings at the Battle of Toulon, Captain John Fawler, and he removed in October 1745 to the Marlborough 90, Captain Richard Watkins, coming home to England in the following year. 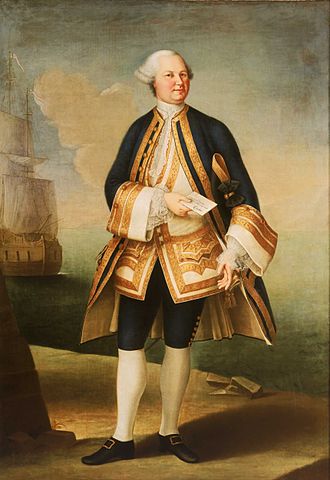 In June 1747 Hughes joined the Warwick 60, Captain Robert Erskine, in order to take passage out to North America where he expected to secure advancement under the friendly eye of Commodore Knowles. During the voyage the Warwick fought an engagement in the Atlantic with the Spanish sail of the line Glorioso 74, but received scant support from her consort, the Lark 44, Captain John Crookshanks. The latter was suspended with Hughes assuming temporary command of the Lark in September, and on 6 February 1748 he was posted captain in Crookshanks stead, an occurrence that caused the latter, who had been dismissed at his court-martial for failing to support the Warwick, to claim that Hughes had poisoned Commodore Knowles against him. During the first half of 1748 Hughes served on the Jamaican station, being paid off in July.

Hughes was not re-employed until January1756 when he commissioned the new Deal Castle 24 for service in the Channel Islands. In July 1757 he was appointed to the Somerset 70 which he commanded at the reduction of Louisbourg in 1758, and then after returning to England went out in the following February to Quebec. He served as flag captain to Vice-Admiral Charles Saunders in the Somerset from 1759 on returning to England, and afterwards in the Mediterranean from May 1760. In 1762 he moved to the Blenheim 90, again as flag captain to Saunders, and he returned home in April 1763.

Once more he went on half-pay until January 1771 when he recommissioned the Somerset 70 as a guard-ship at Portsmouth. Having been appointed commander-in-chief in the East Indies and knighted in October 1773, he sailed in November with his broad pennant aboard the Salisbury 50, Captain George Walters. A most peaceful five years was spent on this remote station prior to his return to England in May 1778.

On 23 January 1778 Hughes had been promoted rear-admiral, and in July he was once again ordered to the East Indies as commander-in-chief. However, he did not sail until the following spring, and during the interim was employed as the temporary commander-in-chief at Portsmouth whilst Admiral Sir Thomas Pye presided over Admiral Hon. Augustus Keppel s court-martial arising from the Battle of Ushant on 27 July 1778. In December he was nominated a K.B.

Flying his flag in the Superb 74, Captain Robert Simonton, and with six sail-of-the-line under his orders, Hughes departed England in March 1779 and re-took Goree on the African coast from the French during the voyage out to the East Indies. Upon arrival he was little employed for the next eighteen months as there was only an insignificant French presence. In December 1780 he destroyed Hyder Ali s pirate fleet at Mangalore but was the recipient of a complaint from Captain Simonton whose new command, the Sartine 32, had been ordered inshore against his professional judgement and had sank after hitting a rock. Hughes was promoted vice-admiral on 26 September 1780 in accordance with seniority, and he continued with his flag in the Superb 74, Captain Henry Ball. In November 1781 he joined Major Sir Hector Munro in the capture of Negapatam from the Dutch, and arriving at Trincomale on 4 January 1782 he co-operated once more at the capture of that colony from the Dutch.

Hughes returned to Madras on 8 February, Captain William Stevens having become his flag-captain aboard the Superb, and in addition to receiving three sail-of-the-line as reinforcements he learned of the arrival in Indian waters of the brilliant Commodore Bailli de Suffren and twelve French sail of the line. Hughes immediately placed his fleet under the Madras batteries so that when Suffren arrived with a convoy he declined to give battle and sailed away. Hughes set sail after him, and slipping past the French men-of-war in the night he took six prizes out of the convoy. The Battle of Sadras followed in gusty conditions on 17 February and proved indecisive, although Captain Stevens was killed in the action.

Returning to Trincomale with Captain Hon. Dunbar MacLellan acting as his flag-captain, Hughes fought the French again on 12 April at the Battle of Providien. During the engagement his centre became isolated, culminating in the massive loss of fifty-nine men killed and ninety-six wounded aboard the Superb alone, the former figure including his first lieutenant who was the son of Captain James Alms of the Monmouth 64. Next day Hughes brought his fleet to anchor and foiled Suffren s wish to attack, and there followed a confusing episode in which Hughes refused to exchange prisoners with Suffren as he felt that he did not have the authority to do so. The British prisoners were then handed over to Hyder Ali, which could only be regarded as a horrifically barbaric gesture by the French commodore.

On 5 July, whilst Hughes was at anchor off Negapatam with eleven sail of the line, Suffren arrived with twelve ships, yet the ensuing Battle of Negapatam on 6 July in gusty conditions was once more indecisive. During this battle Hughes latest flag-captain, Hon. Dunbar MacLellan, lost his life. Receiving intelligence on 20 August that Trincomale was at danger from the French, Hughes headed for that port only to find that Suffren had preceded him. Fortunately, the Frenchman s brilliant plan of attack at the Battle of Trincomale on 3 September was ruined by the mutinous behaviour of his captains, and once again an indecisive action followed between the twelve British and fourteen French sail of the line. In this action, where Henry Newcome acted as his flag-captain, Hughes lost three more of his captains killed, but nevertheless it was felt that he had forsaken a good opportunity to earn a victory.

On 1 November a hurricane swept in overland which forced Hughes to sea from Madras and dismasted the Superb, obliging him to transfer his flag to the Sultan 74, Captain Andrew Mitchell. The majority of his fleet managed to reach safety at Bombay where it was joined by reinforcements brought out from England by Commodore Sir Richard Bickerton, although Hughes replacement, Vice-Admiral Sir Hyde Parker, was lost in passage with his flagship Cato 60. Having returned to the Bay of Bengal with eighteen sail of the line Hughes attacked with a numerical superiority when he met Suffren again on 20 June 1783 at the Battle of Cuddalore. The French with fifteen sail of the line won a strategic victory however by successfully defending Cuddalore. By now the articles of peace had already been signed in Europe, and when news reached the Indian Ocean Hughes came home aboard the Sultan 74, Captain Thomas Troubridge in 1785, the Superb having been wrecked off Tellicherry on 7 November 1783.

Rarely had five consecutive battles between the same opponents failed to produce an overall victory, although the general consensus was that Hughes had done well and that Suffren had under-achieved. The mere fact that on his flagship alone over the five battles Hughes had lost eighty-one men killed and one hundred and ninety-two wounded bore testimony to his determination and the intensity of the struggle.

Hughes did not see any further service but on 1 February 1793 was promoted admiral. He died at his seat at Luxborough, Essex on 17 January 1794 and was buried at St. Mary and All Saints, Lambourne.

He was married twice. He married his first wife, Ann Peters, the widow of Dr. Charles Peters, in 1753 but within a couple of years she died in childbirth. His second wife, Ruth Wheeler, whom he married on 7 November 1765 at St. Margaret s, Westminster, was apparently twice a widow, for she was the mother of Captain Henry Ball who died in 1792. Being childless from both marriages Hughes immense fortune, estimated at approximately 40,000 a year as commander-in-chief in the East Indies, devolved upon his wife s grandson and Captain Ball s nephew, who subsequently became a famous socialite and dilettante revelling in the sobriquet of Golden Ball .

Exceedingly benevolent, Hughes handed out a fortune to worthy causes in the years following his return from the East Indies. A friend of the first lord of the Admiralty, Lord Sandwich, he took the future Admiral Robert Montagu, the first lord s son by his mistress Martha Ray, to the East Indies, and later lent Sandwich large sums of money amounting to 14,000 after the war and 10,000 without security in 1788. Prior to these transactions his wife had also loaned Sandwich money. The financial favouritisms were perhaps a reward to Sandwich for having enabled Hughes accumulation of wealth through his long posting to the profitable East Indies station.

Hughes was a brave, diligent, steady, dogged, honourable officer, who was not blessed with a brilliant tactical ability but did adhere rigidly and determinedly to the fighting instructions. He was known to his men as Old Hot and Hot for his favouring of very hot food, and he obviously enjoyed a great deal of it for his figure could only be described as rotund.