1723-94. He was born on 30 October 1723 at Hilton in Staffordshire, the fourth son of Henry Vernon, and of his wife, Penelope Phillips. He was the brother of Richard Vernon who became a leading horseracing owner and official, and he was also a distant relative of the famous Admiral ‘Old Grog’ Edward Vernon.

From November 1735-9 Vernon was educated at the Portsmouth Royal Academy, and he first went to sea as a volunteer aboard the Portland 50, captained by the unfortunate Hon. John Byng, with whom he moved to the Sunderland 60 in October of the latter year to serve in the Mediterranean. He continued his service on that station aboard the Sutherland 50, Captain George Pocock, and on 3 March 1743 passed his lieutenant’s examination, being commissioned to the sloop Granado, Commander William Parry, on 4 April. In June he joined the newly commissioned Berwick 70, Captain Edward Hawke, and he saw further service in the Mediterranean, being present at the Battle of Toulon on 11 February of the following year.

Vernon was promoted commander of the sloop Baltimore 14 on 5 December 1747, which vessel formed part of the escort for the Portugal convoy in the following January, and with which he brought the homeward-bound convoy into Plymouth at the beginning of March 1748 after a stormy passage that saw one vessel lost and three others forced to return to Lisbon. At the end of October the Baltimore sailed from Spithead for Plymouth with money to pay off the ships in the Devonshire port, and although she separated from her consorts in a heavy gale, concerns for her safety proved to be unfounded. Shortly afterwards Vernon left her. 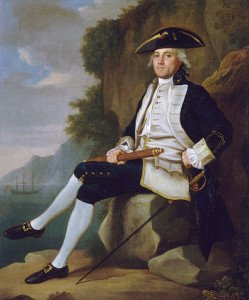 After four years of unemployment he was posted captain of the Mermaid 20 on 3 April 1753, yet he appears to have only retained her for two months before spending another period on the beach. In May 1755 he was appointed to the Lyme 24, which entered dock in June before going out on a cruise, and then returned to Spithead towards the end of August having taken a couple of small prizes. At the end of the year she sailed out of Plymouth in a small squadron under the orders of Rear-Admiral Temple West, and she was later employed in Vice-Admiral Sir Edward Hawke’s grand fleet off the French coast.

In April 1756 the Lyme was dispatched on a cruise in the Bay of Biscay with the Colchester 50, Captain Lucius O’Brien, and the two men-of-war destroyed several vessels before they came upon a convoy under the escort of two French frigates close inshore at dawn on 11 May. The Lyme was able to get up with one of the frigates and engage her for two hours, but she then had to withdraw when the enemy ran close inshore and Vernon’s pilot could not vouch for the Lyme’s safety. The action resulted in the loss of two men killed and seven wounded, but two of the French convoy were captured by the British men-of-war. The Lyme and Colchester then had a desperately hard-fought but inconclusive five and a half hour action on 17 May with the Aquilon 50 and Fidèle 26 after they had discovered the two French vessels standing in for Rochefort with a convoy. Vernon’s command lost three men killed and suffered many wounded in her duel with the Fidèle, and she returned to Plymouth six days later in a shattered condition. Newspaper claims that the Fidèle had struck her colours, but that the Lyme had not been in a position to take possession because of her own condition, were not substantiated by subsequent accounts of the action.

In September 1756 the Lyme was re-rated as a 28-gun frigate, and on 1 November she put out of Portsmouth to return on 14 January 1757 with another prize, a large homeward-bound ship from Martinique. She next brought the St. Malo privateer Revanche 10 into Portsmouth on 20 February, and eight days later shared with the Deal Castle 20, Captain Edward Hughes, in the capture of the Entreprenant 16 off Le Havre, the enemy privateer having reputedly been fitted out by the ladies of the French court.

Taking the Lyme out to the Mediterranean in April 1757, Vernon sent two richly laden French ships from Barbary into Leghorn in November, and he later conveyed the trade from Gibraltar to Smyrna, in the course of which voyage he sent into Leghorn a large ship bound from Syria to Marseilles valued at forty thousand guineas. In June 1758 false reports appeared in the newspapers of the Lyme’s capture by a French privateer off Ostia, with claims that amongst the nineteen men killed and twenty-seven wounded was Vernon, who had received two sabre cuts to the head and a bayonet thrust through the body. The fact that the Lyme had been missing for some time lent credence to the reports, but eventually she arrived safely at Leghorn from Smyrna on 16 June. During the autumn she conveyed the trade from Leghorn to Gibraltar.

Continuing in the Mediterranean, Vernon exchanged with Captain James Baker into the St Albans 64 in November 1758, with which vessel he was present in Admiral Hon. Edward Boscawen’s victory over the French at the Battle of Lagos on 19 August 1759. He was thereafter employed over the winter at the strict blockade of eight French ships in Cadiz by Vice-Admiral Thomas Brodrick, and the St. Albans eventually arrived in the Downs with a convoy of two dozen sail from Gibraltar in March 1760, prior to going around to Blackstakes to perform quarantine. She was then paid off and Vernon found himself once more out of employment.

In August 1761 he recommissioned the Revenge 70, which vessel had undergone extensive repairs at Chatham, and on 22 October she arrived at Portsmouth from the Downs with a convoy, whereupon she joined the Channel Fleet under Admiral Boscawen. In January 1762 reports suggested that the Revenge had gone missing after she had been last spotted three days before a heavy storm in chase of what was assumed to be a Spanish vessel; however these concerns proved to be unfounded. On 12 April she arrived at Cork with a convoy of eight transports from Portsmouth, and thereafter she continued to serve with the Channel Fleet under Admiral Sir Edward Hawke, putting into Plymouth in June, and returning to the port in early September prior to going out once more under the orders of Vice-Admiral Sir Charles Hardy, who had replaced Hawke. She again briefly visited Plymouth with the fleet in early November, and by December she was at Portsmouth under the orders of Vice-Admiral Francis Holburne, where she remained into the new year. She was finally paid off at Chatham in early February 1763.

In September 1763 it was reported that Vernon would captain the Kent 70, the flagship of Rear-Admiral Thomas Pye at Plymouth, but the command went instead to Captain Edward Le Cras. After a long period on the beach Vernon had the guardship Yarmouth 64 at Sheerness from January-October 1770, at the end of which month he removed to the Bellona 74 at Portsmouth, retaining this vessel until she was paid off at Portsmouth in May 1771. In the same month he became flag captain to Vice-Admiral Pye at Portsmouth aboard the Barfleur 98, and on 22 June 1773 he was knighted by the King during his review of the fleet at Spithead, later entertaining the monarch to dinner aboard. He then served until October as flag-captain aboard the Barfleur for the new commander-in-chief, Vice-Admiral Sir James Douglas.

In May 1775 he was appointed commodore and commander-in-chief in the Medway with his broad pennant aboard the guardship Ramillies 74 at Chatham, one of his first acts being to entertain the first lord of the Admiralty, the Earl of Sandwich. He retained this position until August when the previous incumbent, Commodore George MacKenzie, returned to duty following the recovery of his health.

In May 1776 Vernon was appointed the commander-in-chief in the East Indies with his broad pennant aboard the Rippon 60, Captain Hon. William Waldegrave, and he sailed from Portsmouth on 24 November 1776 in the company of the sloop Cormorant, Captain George Young, who in turn would become his flag-captain in November 1777. With the Rippon, two frigates and a corvette comprising his force, he fought an indecisive action against the French Admiral François l’Ollivier de Tronjoly off Pondicherry on 10th August 1778, but neither commander had the necessary strength to enforce their superiority over the other, and eventually Tronjoly retired to Mauritius where he remained thereafter. Once Captain Young was sent home with despatches announcing the capture of Pondicherry in October, Captain Benjamin Marlow assumed the duties of flag-captain aboard the Rippon. On 19 March 1779 Vernon was promoted rear-admiral, and following the arrival of his senior and successor, Rear-Admiral Sir Edward Hughes, he left Indian waters in April 1780 with Captain John Blankett as his flag-captain. During the voyage home he released two East Indiamen which had been blockaded by a small French squadron at the Cape, and after reaching England in February 1781 with a convoy he attended the Admiralty and a levee with the King whilst ending his service with the striking of his flag.

Vernon retired to his residence at Binfield, Berkshire, yet although unemployed he still remained active, and in 1785 he caused some astonishment by engaging in a couple of balloon rides from Tottenham Court Road, landing on one occasion at Horsham and the other at Colchester. He became a vice-admiral on 24 September 1787, an admiral on 12 April 1794, and he died at his seat near Richmond two months later on 16 June, being buried at Binfield Church.