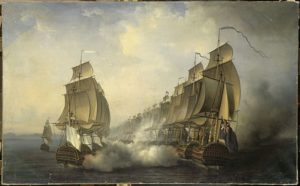 Smith commanded the Exeter at the Battle of Cuddalore in 1783

Died 1796. His father sailed in Commodore George Anson s circumnavigation of the globe during the early 1740 s.

In 1772 Smith was serving in the West Indies as a midshipman, and by 1777 was employed on that station as a sailing master. He was commissioned lieutenant in August 1778.

In July 1781 he was promoted commander, and in the summer of 1782 joined the storeship San Carlos 22, serving in the East Indies and being present at the Battle of Trincomale on 3 September. Having already been posted captain on 29 July 1782 he was commanding the Exeter 64 in the spring of 1783 and fought at the Battle of Cuddalore on 20 June where she lost four men killed and nine wounded. After sailing for the Cape his command was deemed to be unseaworthy and was destroyed on 12 February 1784.

He was the flag captain to Rear-Admiral Sir Richard King, the commander-in-chief of the Newfoundland station aboard the Assistance 50 from April 1792 and the new Stately 64 from March 1793, returning home each winter.

Smith commanded the Excellent 74 during May and June 1794 and in August 1795 joined the Captain 74, serving in the Mediterranean. Suffering from ill health, he exchanged with Captain Horatio Nelson of the Agamemnon 64 in the Mediterranean on 11 June 1796.

Captain Smith died at Gibraltar shortly after joining the Agamemnon, which ship returned home to be paid off at Chatham on 19 September.

His sons, William, who served with him from 1792 and John Samuel, both entered the navy.

In the late 1780 s Smith was a witness to a House of Lords committee regarding his witnessing of the abhorrent treatment of slaves in the West Indies.