Parker s initial service was with his father and under Vice-Admiral Edward Vernon before he was commissioned lieutenant in 1743 abroad the Russell 80, Captain Robert Long, moving to the bomb Firedrake, Commander John Wilson, in November. He took part in the Battle of Toulon on 11 February 1744 aboard the flagship to Rear-Admiral William Rowley, the Barfleur 90, Captain Merrick de l Angle, and on 19 March moved to the flagship of Vice-Admiral Richard Lestock, the Neptune 90, Captain George Stepney.

He was promoted commander of the hospital ship Maidstone in the Mediterranean on 11 March 1745, and during 1746 he commanded her at Port Mahon before arriving home in November. On 6 May 1747 he was posted captain, and he commissioned a captured French privateer as the frigate Margate 24 at Kinsale, the town where his father resided. He commanded this vessel in the Channel, the North Sea and the Mediterranean, and when she was paid off in April 1749 he had a brief spell aboard the Lancaster 66 before going on half-pay.

Parker was appointed the regulating captain at Bristol during March 1755, but two months later commissioned the new Woolwich 44 at Portsmouth for the Baltic. During the voyage he fell badly ill to a fever that swept through the ship. He subsequently went out to the Leeward Islands in December 1756, being fortunate enough to capture amongst other prizes a valuable French storeship, the Mareschal de Broglio in November 1758. Remaining on that station he transferred to the Bristol 50 in January 1759, commanding her in the unsuccessful campaign against Martinique and the more successful campaign that took Guadeloupe. In May he joined the Buckingham 68, and he came home with a convoy in 1760.

Continuing to command the Buckingham in the Channel, Parker led the squadron which destroyed the fortifications on the Isle d Aix in July 1761, and he served at Commodore Hon. Augustus Keppel s reduction of Belle-Isle a year later. With the Buckingham being deemed unfit for further service he briefly captained the Terrible 74 at Harwich from the autumn of 1762 until January 1763 when once again he went on to half-pay.

From 1763-73 Parker resided at Queens Square in Westminster, making frequent but unsuccessful requests for employment, yet being knighted by the King on 10 June 1772 as proxy to Admiral Sir John Moore on that officer s installation as a Knight of the Bath. In October 1773 he was appointed to the guardship Barfleur 90 at Portsmouth, and in June 1775 he assembled a squadron of observation to be sent to cruise off Cape Finisterre, flying his broad pennant aboard the Royal Oak 74. 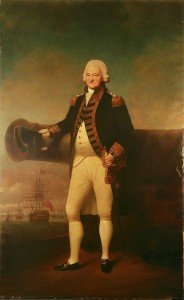 In October 1775 he was ordered to take command of a small squadron assembling for America with his broad pennant in the newly launched Bristol 50. The ships left Portsmouth on 26 December, reached Cork in January, and embarking a convoy of six regiments commanded by Lord Cornwallis left on 12 February. The convoy eventually sighted Cape Fear on 3 May after encountering adverse weather during the voyage. On 28 June1776, after convincing Lieutenant-General Sir Henry Clinton to do so, Parker attacked Charleston Harbour with two 50-gun ships and five frigates, but in passing the batteries on Sullivan s Island four frigates were grounded with one being set afire. The Bristol and the Experiment 50 fought alone for ten hours before Parker called the attack off with two hundred men being killed or wounded. Although Parker claimed that he was the only un-wounded officer this was to distract from the fact that the wound he did receive tore off his trousers, resulting in him requiring assistance to walk and earning him the ridicule of the American press. His flag-captain John Morris received six wounds from which he later died.

With Tobias Caulfield succeeding as his flag-captain he afterwards joined Vice-Admiral Lord Howe at New York in August and served at the reduction of Long Island during the New York campaign, which lasted from July-October. On 8 December 1776 he occupied Rhode Island with General Sir Henry Clinton, flying his flag aboard the Chatham 50, Captain Tobias Caulfield, which he had joined in September. He remained in command at Rhode Island for the next eleven months, having two 50-gun ships and as many as eight or nine frigates at his disposal.

Promoted rear-admiral on 20 May 1777, he was appointed commander-in-chief at Jamaica on 11 June and left Rhode Island in November, transferring his flag from the Chatham to the Bristol 50, with Captain Caulfield, and arriving at Port Royal on 13 February. During his time in Jamaica Parker initially enjoyed cruising at sea with the Bristol but then increasingly spent most of his time ashore at the splendid ‘Admiral’s Pen’ residence below the Blue Mountains inland of Kingston. Variously he flew his flag aboard the Hinchingbrooke 28 commanded by his teenage son Christopher and from 1780 the Ruby 64, Captain John Cowling and the Sandwich under various commanders.

He was further promoted to vice-admiral on 29 March 1779, and he despatched forces that conducted the successful and enriching Omoa campaign between 19 September – 19 October 1779, one of the beneficiaries being his own son. In July 1780 he was joined by Rear-Admiral Joshua Rowley and Commodore Hon. Robert Boyle Walsingham with ten sail of the line from Admiral Sir George Rodney s Leeward Islands fleet. His relationship with the self-regarding Rodney was far from amicable however, and following the Great Hurricanes of October 1780 he conspicuously failed to make the Port Royal dockyard facilities available to his rival. In the following year he further refused to release his own sail of the line when the lofty Rodney complained that Jamaica could not be in danger whilst he held the command of the Leeward Islands. He left for England in May 1782, having been succeeded by Rear-Admiral Thomas Graves in the previous November, arriving in August with Rodney s flag-ship, the Sandwich 90, Captain John Cowling, which was carrying the defeated French Admiral Comte De Grasse and his staff from the Battle of the Saintes. The Sandwich and her attendant convoy were escorted into home waters by Admiral Lord Howe s fleet of twenty-five vessels, there being a Spanish fleet of forty sail of the line at large, and she arrived at Spithead on 29 July where Parker immediately arranged a dinner for the Comte de Grasse at the George Hotel in Portsmouth..

On 10 April 1793 he was appointed commander-in-chief at Portsmouth with his flag flying in the Royal William 90, Captains George Gayton, and from the following year Francis Pickmore. Here he took command of the attempt to rescue men from the stricken Boyne on 1 May 1795, played a part in attempting to end the mutiny of 16 April 1797, and remained in the post until 1799 bar a brief period of leave in July 1798.

He became admiral of the fleet on 16 September 1799 after the death of Admiral Lord Howe, at which time he was also appointed a general of marines and vacated his post at Portsmouth in favour of Admiral Mark Milbanke.

Parker s final public service was as the chief mourner at Vice-Admiral Lord Nelson s funeral on 9 January 1806. He died at Weymouth Street, London, on 21 December 1811.

He married Margaret Nugent, by whom he had two sons and two daughters. His wife was of a very strong personality, and during his period of command at Jamaica was almost his equal in the management of the station, as illustrated by a letter sent from Captain John Cowling’s cousin thanking her for ensuring Cowling’s various appointments.

He was an early patron of Nelson, probably because the young man was the nephew of the influential comptroller of the Navy, and was more self-serving than most in the use of patronage, his son being posted captain at the age of eighteen, and his nephew George a lieutenant at thirteen. Parker was a pro-slaver, stating that the abolition of the Africa Trade would, in my opinion, cause a general despondency amongst the Negroes and gradually decrease their population and consequently the produce of our islands, and must in time destroy near half our commerce and take from Great Britain all the pretensions to the rank she now holds as the First Maritime power in the World.

He was tough and opinionated, plump with heavy jowls, and was well regarded for his composure and coolness in action, although he was later known for being cantankerous. Lord Sandwich rated him highly, but the rest of Lord North s government did not hold this confidence. His West Indian prize-money allowed him to build an estate in Essex, although during his parliamentary years his address was given as Basingbourn, Cambridgeshire. He supported the government but only made two speeches during his time in the House of Commons.