Sutton was commissioned lieutenant on 17 November 1765 and promoted commander on 26 May 1768 of the Fortune 14, which he appears to have retained until March 1770. After commissioning the new Kingfisher 14 at the Nore in September 1770 he was posted captain on 10 January 1771 of the Preston 50; however it is not clear as to whether he took any of these vessels to sea.

With the American Revolutionary War gathering pace he commissioned the new Proserpine 28, which frigate was launched at Harwich in July 1777, serving in home waters and bringing the captured French schooner Jeune Nannette, bound from Martinique to Nantes, into Portsmouth at the end of the year. He continued to cruise out of the Hampshire base with a number of other vessels in company during the early part of 1778. 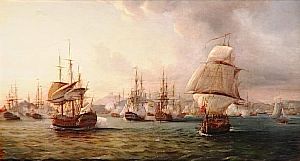 On 28 April 1778 the Proserpine arrived at Gibraltar with urgent dispatches after a passage of six days from Portsmouth, a voyage which at the time was reported to be the quickest from England to the Rock. Sutton then shadowed the Toulon fleet commanded by Vice-Admiral Charles, Comte d’Estaing as it sailed some three hundred miles out into the Atlantic, and concluding that it was heading across to the Americas he rushed home to be landed at Falmouth, from where he hurried overland to report to the Admiralty in London. His valuable intelligence consequently played a major part in the despatch of Vice-Admiral Hon. John Byron’s fleet to North America on 9 June. After rejoining the Proserpine, which had reached Portsmouth on 5 June, Sutton made a rendezvous with Admiral Hon. Augustus Keppel’s Grand Fleet at sea on 19 June, and she was present at the Battle of Ushant on 27 July. She continued to serve with the fleet into the autumn, and in January 1779 Sutton was called to give evidence at Admiral Keppel’s court-martial relevant to the commander-in-chief’s conduct in the battle. On 27 March the Proserpine departed St. Helens with the West Indies convoy under the orders of Captain Hon. John Luttrell of the Charon 44, and Sutton appears to have left her later that year whilst still in the West Indies to return home.

After recommissioning the Isis 50 at Woolwich from August 1780, orders were issued for her to be fitted out for immediate service in November, and she sailed from the Downs on Christmas Day. Six days later on 31 December, Sutton ran the Dutch man-of-war Rotterdam 50 down in the Channel and apparently obliged her to strike, although as his crew were very raw he was unable to complete the task of possessing the enemy vessel which, in his official despatch, he erroneously described as a 60 or 64-gun ship. When Captain Hon. George Keith Elphinstone of the Warwick 50 easily captured the Dutch vessel under similar constraints a week later Sutton was brought to a court-martial on 19 January under the presidency of Admiral Sir Thomas Pye at Portsmouth, and he was reprimanded for highly reprehensible conduct in not doing his utmost to take or destroy the enemy, although the members of the court did agree that the Isis had been rushed to sea with an untrained crew.

Being ordered out to the Cape with Commodore George Johnstone’s squadron shortly afterwards, Sutton commanded the Isis 50 at the Battle of Porto Praya on 16 April 1781 where she was damaged aloft, thereby retarding any possible pursuit of the French. The next day Johnstone charged him with failing to get into action, and in removing him from his command placed him under arrest. He was succeeded in command of the Isis by Captain Hon. Thomas Charles Lumley. As it was impractical to immediately arrange a court-martial, Sutton was carried out to the East Indies under a relaxed confinement, and he was only brought to trial in December 1783 following his return home. The court, sitting at Portsmouth aboard the Princess Royal 90 under the presidency of Admiral John Montagu, unsurprisingly acquitted him of any misconduct.

In December 1784 Sutton brought a civil action against Johnstone at the Guildhall before the Chief Baron of the Exchequer, Sir John Skynner, and was awarded £6,000 damages, although this judgement was subsequently overturned by the House of Lords on Admiral Lord Howe’s advice that it was against the interests of the Service. He did however win a case allowing him the proceeds of prize money earned by the Isis whilst he was in custody, and he had the satisfaction of knowing that his plight was viewed with great sympathy by many of his contemporaries including the young Captain Horatio Nelson, not least because Johnstone was regarded as an incompetent bully who looked to divert blame for his failures elsewhere.

Sutton did not see any further service but became a superannuated admiral in 1794 and died at Screveton Hall near Bingham in June 1817.

He married his cousin, Roosilia Thoroton and had issue five other children. His residence was Screveton Hall, Nottinghamshire.