1758-1836. He was the youngest of four sons of the Reverend John Graves of Castle Dawson, County Londonderry, Ireland, and of his wife Jane Hudson. He was the nephew of Admiral Samuel Graves and the cousin once removed of Admiral Lord Thomas Graves. One brother, Admiral Sir Thomas Graves, was second-in-command to Vice-Admiral Lord Nelson at the Battle of Copenhagen, and two other brothers, Samuel, and John, became superannuated admirals, as did his cousin David Graves.

Richard Graves went out to North America in the early summer of 1774 aboard the Preston 50, Captain John Robinson, flying the flag of his uncle, Vice-Admiral Samuel Graves, the commander-in-chief in North America, and on which ship his brothers Samuel and John also served. He was commissioned lieutenant by his uncle on 24 December 1775, being appointed to the Renown 50, Captain Francis Banks, in which he was active inshore with the ship’s boats, being present in the campaign to capture New York from July 1776 and the occupation of Rhode Island on 8 December. During the following winter the Renown was based in the nearby Conanicut Passage where Graves was regularly engaged inshore in boat action against the colonials. 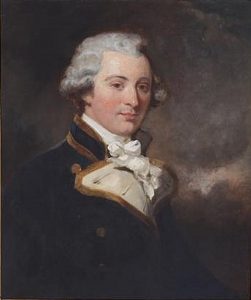 In September 1777 he joined the Panther 60, Captain John Harvey, fitting for the flag of Rear-Admiral Robert Duff at Portsmouth and going out to Gibraltar where he spent the next few years during the great siege. Here he led two boats in boarding and carrying a polacre off Europa Point under fire from Spanish gallies, and when Admiral Sir George Rodney arrived to relieve Gibraltar in January 1780 Graves went aboard the Alcide 74, Captain John Brisbane, after she had drifted under the Spanish batteries and piloted her to safety.

Later in 1780 Graves was appointed the third lieutenant of the London 90 commanded by his cousin, David Graves, and flying the flag of his distant cousin, Rear-Admiral Thomas Graves, who arrived in North America on 13 July in command of six sail of the line to reinforce the commander-in-chief, Vice-Admiral Marriot Arbuthnot.

In 1781 Arbuthnot appointed Graves to the brig Swift 14, in which he joined Brigadier-General Benedict Arnold’s expedition against Virginia, although in passage a storm obliged him to jettison all but four of his cannons. He then joined his brother Thomas in proceeding up the Potomac River to prevent any attack by the Marquis de Lafayette on the Army’s rear-guard, being daily engaged with the enemy. On the arrival of the French fleet on the coast he was sent with dispatches from the Chesapeake to New York, but that evening off the Virginia Capes he fell in with the privateer Holker, armed with eighteen six pounder cannons and a crew of one hundred and twenty men who far outnumbered Graves’ thirty-five men and the Swift’s remaining four 4-pounder cannons. During the action that followed the vessels were twice aboard of each other, and being defeated in their second boarding attempt the enemy abandoned thirty pistols on the Swift’s deck. Graves’ command had commenced the action with four feet of water in her hold and her pumps choked, and considering the damage sustained in the engagement it was to her good fortune that on the next day she fell in with the frigate Blonde 32, Captain Andrew Barkley, which kept her company until she reached New York, whereupon she sunk at the entrance to the harbour. During the action Graves had been wounded by splinters in his thigh.

Graves was posted captain on 29 August 1781 by Rear-Admiral Graves, who had by now assumed the command of the North American station, and he was appointed to the ex-American privateer Belisarius 20. With this vessel he would later claim to have sent into New York six privateers, some the equal of his command, and to have had three hundred and sixty prisoners aboard at one stage. His most conspicuous achievement was on 4 February 1783 off Cape Hatteras when he captured the Tartar 20 after an hour’s night-time engagement which saw her consort the Alexander 22 take flight. Being too badly damaged in the mainmast, bowsprit and rigging his command he could not pursue the Tartar’s consort and he was grateful to fall in the next day with the Perseverance 36, Captain Skeffington Lutwidge, and the Ceres 32, Captain James Hawkins, who were able to assist in repairing the Belisarius and her prize. He subsequently returned to England on the peace and his command was paid off at Deptford in October 1783.

Despite regular letters and personal visits to the Admiralty Graves was unable to secure employment during the Spanish Armament in 1790, and more frustration followed over the next two years when his requests for leave of absence to attend to his affairs in South Carolina were refused by the first lord of the Admiralty, Lord Chatham, despite the fact that he had not been considered for a command. Once the French Revolutionary War commenced he made numerous further requests for active employment, all of which were to no avail.

To his fury Graves was denied flag rank when a general promotion was made on 1 January 1801 and he wrote a letter to Earl Spencer, the first lord of the Admiralty, from Fenton’s Hotel, St. James Street, expressing his astonishment at not having been included in the list of those officers promoted. The reason given for his omission was that he had not been employed in the current war, and hence was only qualified for a superannuated promotion. Upon Admiral Earl of St. Vincent’s accession to the role of first lord of the Admiralty later in 1801 Graves was given to understand that he would be given flag rank, but despite a great deal of correspondence he was still disappointed of a promotion. Upon returning from private business in America in 1803 he again took up his claim whilst also offering his services for employment, but with all entreaties coming to nought he finally accepted the rank of superannuated rear-admiral on 18 June 1804 from the new first lord of the Admiralty, Lord Melville.

Graves lived thereafter in retirement and spent his later years in Brussels with one of his daughters and her husband, Lieutenant-Colonel Baron Van Der Smissen. He died on 12 March 1836 in Paris to be buried in Père Lachaise Cemetery.

He married an heiress, Louisa Carolina Colleton, the only daughter and heiress of Sir John Colleton, and a native of South Carolina where her family had long been leading members of the colony, and who claimed a share of the ownership of the Bahamas. Louisa’s father died in America in 1777 before she reached maturity and whilst she was living in England, and her home and plantation of Fair Lawn, situated between Charleston and Camden in South Carolina was seconded by the British Army but burned in subsequent actions with the Americans. Her loss in property, slaves, stocks and crops was estimated at £30,000 or £4.5m in today’s money. The couple had two sons and eight daughters, all of wose Christian names ending in ‘a’, including three surviving daughters, the youngest of whom, delightfully christened Septima Sexta, married her cousin, Lieutenant-Colonel Sir James Colleton. Graves’ earlier address was that of the family seat, Hembury Fort near Buckerell, Devon, which he inherited from his uncle, Admiral Samuel Graves.

As a young boy and the youngest of his brothers Graves was regarded as somewhat precocious, a tease and a bully.

Thank you to Gerard Molyneux for providing the image of Admiral Graves.