Staines joined the navy in December 1789 aboard the Solebay 32, Captain Matthew Squire, serving in the West Indies until May 1792. In December of that year he took a berth upon the brig Speedy 14, Captain Charles Cunningham, going out to the Mediterranean, where he subsequently moved with that officer to the Imp rieuse 38 and later the Lowestoft 32. In 1794 he transferred on that station to the Victory 100, flagship in succession of Vice-Admiral Lord Hood and Rear-Admiral Robert Man, under whom he fought in Admiral William Hotham s action with the French on 13-14 July 1795 before the Victory became the flagship of Admiral Sir John Jervis.

On 3 July 1796 Staines was commissioned lieutenant of the sloop Peterel 16, Commander Hon. Philip Wodehouse, and he led a successful raid on a Martello Tower during December. In July of the following year, by which time his commanding officer was Lord William Allen Proby, Staines led two boats which successfully boarded a two-gun French privateer, mortally wounding its commander. Come September only his remarkable swimming prowess saved him when a boat in which he was carrying despatches overset off Faro, Portugal, with the loss of four men. Staines and another man survived after a four-hour ordeal in the water which eventually saw them spilled onto Cape St. Mary, but despite his ordeal he still had the strength to row a boat up to Faro to deliver the despatches. 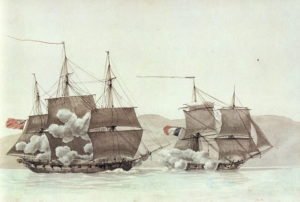 Much of Staines’ early career was spent aboard the sloop Peterel, seen here in action in 1800.

On 12 October 1798 the Peterel, now commanded by George Long, was captured by four Spanish frigates off Majorca, and by the time that she was re-taken the next day her officers and crew had already been despatched as prisoners to Cartagena, having been robbed of all their possessions. Whilst being escorted to Gibraltar for exchange Staines was wounded in attempting to defend his head from a sabre blow. At the end of the year he was exchanged by the Spanish at Gibraltar and he rejoined the Peterel, now commanded by Captain Francis William Austen.

Following the breakout of the Brest fleet on 25 April Staines took to horseback in north-west Sicily to carry news of its movements to Rear-Admiral Lord Nelson at Palermo, and he was rewarded with a transfer to Nelson s flagship, the Foudroyant 80, as her third lieutenant on 17 October 1799. He was present at the capture of the G n reux 74 on 18 February 1800 and the Guillaume Tell 80 on 31 March, and then served under Vice-Admiral Lord Keith as his flag-lieutenant in the expedition to Egypt from 8 March 1801, for which service he received a Turkish Order of the Crescent. In December he assumed the acting-command of the troop-ship Romulus 36 in place of the sickly Commander John Culverhouse, a position he held for thirty-seven days.

On 15 May 1802 Lord Keith appointed Staines to the brig Cameleon 16, which he commanded at Malta during the peace and at Toulon on the renewal of hostilities, having officially been promoted commander on 26 July. When hostilities re-opened he enjoyed no small measure of success against the enemy gunboats and coastal traders before being sent on a disappointingly uneventful cruise up the Adriatic during September 1804. From December 1804 until April 1805 he was employed in the protection of the Levant trade, and by June he was back in the western Mediterranean in action with the local gunboats, where in August he was obliged to jettison guns and stores to escape from a Spanish 74. The Cameleon returned to England in the following month to be paid off, and whilst at Portsmouth Staines dined with his old friend, Vice-Admiral Lord Nelson, on the day before the latter left England for the last time to fight and lose his life at the Battle of Trafalgar.

Whilst on the beach Staines was one of many officers posted captain on 22 January 1806, but he had to wait until 28 March 1807 for his next appointment, this being to the new frigate Cyane 22, which he commanded in the expedition under Admiral Lord Gambier that forced the surrender of Copenhagen on 7 September. He remained in the Baltic blockading Zealand until the end of the year.

In February 1808 the Cyane sailed to the Mediterranean where on 22 May off Majorca she captured a Spanish privateer, the Medusa 12. A few days later Staines was forced to return this vessel to his erstwhile enemy at Palma, for by now the Spanish had transferred their allegiance to Britain against France. He afterwards supported the patriots in southern Spain, and in 1809 operated on the coast of Naples where he was busily engaged destroying Martello towers prior to serving under Rear-Admiral George Martin during June at the capture of Ischia and Procida. 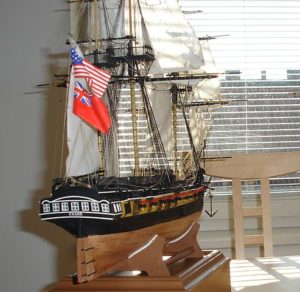 Staines earned a knighthood for his brilliant conduct in command of the sloop Cyane. She was later captured by the American Navy in the War of 1812.

The most memorable two days of Staines career occurred in Naples Bay in June 1809, beginning on the morning of the 25th when in company with the brig Espoir and a dozen British and Sicilian gunboats he orchestrated the capture of eighteen Neapolitan vessels and the destruction of a further four. The action continued into the next day, 26 June, when his men destroyed a battery. That evening the Cyane was engaged by the French frigate Cerere 42, a 28-gun corvette, and twenty gunboats, and despite fighting alone for upwards of an hour and exhausting all her shot, the Cyane forced her opponents to flee, although for Staines it was at the personal cost of a cruel wound to the socket of his arm which necessitated its amputation. The Cyane returned home to England for a refit in mid-October, where on 6 December 1809 Staines was awarded with a knighthood and also granted permission to accept and wear the insignia of the Knight Commander of the Royal Sicilian Order of St. Ferdinand.

In May 1810 he was appointed to the Spanish-built frigate Hamadryad 36, initially under orders for the Cape, but then sailing for Newfoundland in August in escort duty before returning to Portsmouth in December. She later went out to Lisbon with a convoy in early 1811 and then proceeded to St. Helena to collect the China fleet with which she returned to the Downs at the end of August. The Hamadryad immediately returned to Portsmouth with another convoy and then departed for Cork in the middle of October where she went out on a cruise prior to returning to Portsmouth for a refit in March 1812.

On 15 June 1812 Staines joined the new frigate Briton 38 at Chatham in place of the late Captain Henry Whitby who had attended her launch, but who had died before he could take her to sea. The Briton saw service in the Channel and the Bay of Biscay, capturing the privateers Sans-Souci 14 on 15 December and Melance 4 off Bordeaux on 9 September 1813.

On the last day of 1813 Staines took a convoy out to Madeira from where he diverted with a damaged merchantman to Rio, arriving on 19 March 1814. The Briton was then sent around Cape Horn into the Pacific in search of the American frigate Essex 32, which vessel would be captured by Captain James Hillyar s Phoebe 36 off Valparaiso on 28 March 1814. Remaining in the Pacific in company with the Tagus 38, Captain Philip Pipon, the Briton cruised off Callao before the two frigates annexed the American island of Nukahiva on 28 August, voyaging thereafter to Valparaiso.

On 17 September 1814 the Briton and Tagus reached the uncharted Pitcairn Island where they found John Adams, the only surviving member from the mutiny on the Bounty, which had occurred on 28 April 1789. The two captains decided to let Adams remain on Pitcairn in view of his position at the head of the pious group of Anglo /Tahitian settlers, and they merely sent an account of the colony to England. The Briton remained in the vicinity of Valparaiso until April 1815, and from there she sailed on to Rio and England, arriving on 8 July to be paid off in the following month at Portsmouth. In the meantime Staines had been created a K.C.B on 2 January 1815.

In March 1817 Staines was named in the House of Lords during the hearing of an act to dissolve the marriage of his cousin, the banker Richard Halford, and that gentleman s wife of twelve years, Sarah Tournay Halford, on account of her adultery with Staines. Two months later, on 31 May, he fought a duel at Portsmouth with a Major Holbrook in which he was badly wounded in his remaining arm, and which the newspapers claimed was over a lady , presumably Mrs Halford. An action was then heard against him in the Kings Bench in July for trespass, assault, and criminal conversation with Mrs Halford, and he was ordered to pay damages of 1,000. The legal arguments continued for another couple of years, during which time attempts were made to discredit his sister, who was the prime witness against Staines. These arguments went against Staines, who following the duel with Major Holbrook had been medically certified as unable to write his name, although he was nevertheless able to ride with a local hunt.

From October 1823 until December 1825 Staines commanded the Superb 74 at Jamaica and Lisbon, and from 1827-30 flew a broad pennant aboard the Isis 50 in the Mediterranean, where on 31 January 1828 a squadron under his command consisting of two frigates and other vessels attacked a Greek pirate stronghold at Carabusa Island, Crete. In March 1829 it was reported that Staines had been stabbed several times in a frenzied assassination attempt by a Turk whilst dining at Smyrna, and that he had only saved himself by utilising his cocked hat in self-defence. The life of the would-be assassin was spared by the local governor after he admitted under questioning that he had been hired to kill Staines by a high-ranking official in Smyrna.

Two weeks after returning from his Mediterranean service Staines died at Dent de Lion on 13 July 1830 from an aneurism of the aorta, and he was buried in St. John the Baptist Church, Margate. His will contained the curious request that his heart and remaining arm be preserved for burial with his wife upon her death.

Staines married Sarah Bargrave of Eastry Court, Kent in May 1819, this being the previous Mrs Sarah Tournay Halford over whom he had been taken to court for adultery.

Staines received a pension of three hundred guineas in respect of his injuries. His nephew, Thomas Dilnot Stewart, entered the service in 1808, served with him in the Briton, and was promoted commander in 1843. Staines left two illegitimate daughters, Mary and Margaret, who after the death of his remarried widow fought a court case to seek an inheritance which Staines had apparently intended them to have, but had not made the proper provision in his will.