1709-96. He was born to Francis Geary and his wife, Judith Barber, his father being the descendent of a family from Aberystwyth, Cardiganshire, who had relocated to Shropshire, and then to Buckinghamshire.

In 1727 Geary entered the navy on the Revenge 70, Captain Coningbury Norbury, going out with the fleet to the Baltic and later joining reinforcements sent to Gibraltar. He was promoted lieutenant on 19 March 1734, and amongst other employment served from 1740-1 aboard the Victory 100, Captain Samuel Faulkner, the flagship of Admiral of the Fleet Sir John Norris in the force that was formed to confront a possible attack by Spain in its alliance with the Young Pretender. 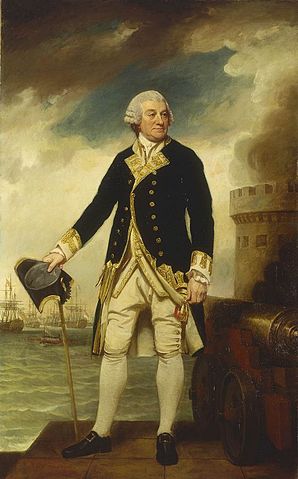 On 30 June 1742 he was posted to the command of the Squirrel 20, in which he captured a privateer off Madeira which he subsequently employed as a tender. More enriching was his capture on 10 February 1743 of a most valuable merchantman registered to France but bound from the Spanish South American colonies to Cadiz. Apparently he shared the proceeds of this prize with another captain, even though the date of their agreement to pool their earnings had expired.

Geary moved to the Dolphin 24 in December 1743, then three months later commissioned the new Chester 50, both vessels being attached to the Channel fleet. In company with the Sunderland 60, Captain John Brett, he took yet another rich prize on 20 February 1745, this being the Elephant 20 which was carrying 24,000 dollars from Europe from Mississippi. He was also present when eight French West Indiamen were captured by the fleet. In the summer he went out to participate in the siege of Louisbourg, although on this occasion he was sent home with despatches before any prizes were taken, thereby missing out on an additional 12,000, not that he needed it. He left the Chester shortly afterwards.

During the winter of 1746-7 he commanded the Prince Frederick 64 in an acting capacity for Captain Harry Norris in the Channel, and with the patronage of the first lord of the Admiralty, the Duke of Bedford, he commissioned the new Culloden 74 in September 1747 to serve under Rear-Admiral Edward Hawke in the Bay of Biscay, remaining in that capacity until the peace of 1748.

Following the peace, Geary was appointed commodore and commander-in-chief in the Medway with his flag on the Culloden, but he gave up the position in the early autumn of 1748 to retire ashore for the next seven years.

In February 1755, with war against France looming once more, Geary commissioned the Somerset 70 to go out to North America with Vice-Admiral Hon. Edward Boscawen, whose instructions were to protect the British colonies against a French squadron under Dubois de La Motte. He returned in November, and from 1756-7 served in the Channel, although during this period he also sat on the court martial of the unfortunate Admiral Hon. John Byng. On 13 April 1757 he assisted the Devonshire 66, Captain William Gordon, and Rochester 50, Captain Robert Duff, in the capture of the privateer Victoire 26, and in the same month was with the Rochester when they captured two letters of marquee bound for Quebec with soldiers, arms and provisions.

By September 1757 Geary was at Halifax, having gone out with four sail of the line to reinforce Vice-Admiral Francis Holburne, but an expedition against Louisbourg was curtailed by a ferocious hurricane that forced many ships back to England for repair. After returning to England, Geary raised his broad pennant aboard the Princess Royal 90, Captain Edward Barber, as commander-in-chief at the Nore, but remained on this inactive service for but a few months.

In early 1758 he commissioned the new Lenox 74 for employment in the Grand Fleet in the Channel commanded by Admiral Lord Anson, and in February of the following year transferred to the new Resolution 74, serving under Admiral Sir Edward Hawke off Brest, and raising a commodore s broad pennant in May when placed in command of a division consisting of ten sail of the line and two frigates.

Having learned in June 1759 that he had earlier been promoted rear-admiral on 19 May, Geary continued to cruise off Brest with the Resolution, and with Captain Richard Norbury serving as his flag-captain. On 7 July the two officers removed to the Sandwich, then when that ship was sent in to Plymouth for a refit Geary transferred on 29 August to the Royal George, Captain John Campbell. He returned to the Sandwich, Captain Norbury, when she rejoined the fleet on 29 September, but was then unfortunate enough to miss the Battle of Quiberon Bay in November after the Sandwich had sprung her main-mast in a storm and entered Plymouth for repairs. Despite this ill-fortune, after returning to port on 27 December he was praised for maintaining his ship at sea for so many months.

Returning to duty at the end of April 1760, Geary commanded a detached squadron off Rochefort watching over a prospective French expeditionary force bound for the East Indies, although when this fleet did not sail he threw over the blockade on 6 September. Returning home on 25 October after a further period with Hawke s fleet, Geary then held the command of the Portsmouth station with his flag initially aboard the Royal Sovereign 100, Captain Robert Hathorn. In this role he superintended the equipping of squadrons bound for the attacks on Belleisle and later Havana. He was advanced to the rank of vice-admiral on 21 October 1762 and retained the Portsmouth command until the peace of 1763, although he suffered some illness, possibly scurvy, in the summer of 1761 and was housebound in Surrey. 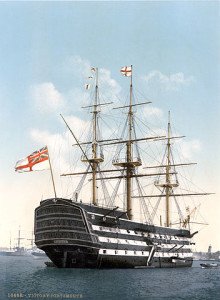 In 1769, having failed to get elected M.P. for Rochester in the previous year, he resumed the command of the Portsmouth station with his flag flying on various ships to include the Achilles 60, Captain John Wheelock, the San Antonio 64, Captain Clark Gayton, in 1770, and the Namur 90, Captain Walter Griffith, in 1771. During this period he became embroiled in controversy when forbidding Rear-Admiral John Elphinstone, commanding the visiting Russian fleet, from firing a morning and evening gun. He left the post in 1771.

Geary was promoted admiral on 31 March 1775, and on 22 May 1780, despite the obvious drawback of his age, was placed in command of the Channel fleet following Admiral Sir Charles Hardy s death. This unusual appointment highlighted his disinterest in fractional politics at a time when the fleet was split by the Keppel / Palliser dispute, and it certainly had little to do with his own abilities. Fortunately he was able to employ the brilliant Captain Richard Kempenfelt as his captain of the fleet, whilst the worthy Vice-Admiral Hon. Samuel Barrington, who had refused the command, remained as his chief subordinate. After going to sea at the beginning of the campaign in June with his flag flying on the Victory 100, Captain Samuel Wittewronge Clayton, nothing of note occurred during his cruise apart from the capture of twelve French merchantmen on their way home from the West Indies, although during his ten week cruise in the Bay of Biscay almost two thousand five hundred men fell sick to scurvy. After returning to port he resigned his position on 27 August because of ill health.

Geary was created a baronet in August 1782, and after retiring to Polesden Lacey in Surrey he died on 7 February 1796.

In May 1748 he married Mary Bartholomew of Oxon Heath in Kent, a lady whose fortune was a match for his own, and they had issue two sons and three daughters. His eldest son was killed serving under General Sir John Burgoynew as a junior army officer in North America in 1776, and a daughter also predeceased him. His second son and heir, Sir William Geary, sat in Parliament as the independent M.P. for Kent from 1796-1806, and 1812-18. With the substantial wealth Geary had accrued through the earning of prize money during his early years of service he was able to procure the impressive estate of Polesdon Lacey in Surrey in 1747.

Geary was renowned as being of a most even temper, charming, gallant, unassuming and kind, but too placid for high command, being regarded as more suitable for a subordinate role. Boscawen called him my stupid friend , and Kempenfelt in describing him as brave and generous , maintained in 1780 that he was lacking in memory, judgement and decisiveness. No doubt the brilliant Kempenfelt was somewhat aggrieved that Geary, albeit generously, had made it clear that he could not understand his subordinate s newfangled signalling system. Nevertheless he was certainly popular, and a prominent member of his profession, and his seamanship skills were undoubted.

As a young man Geary was a keen campanologist or bell ringer, being a member of the record-breaking Society of College Youths. In his later years he grew salad vegetables at sea to assist in the fight against scurvy.