Temple was commissioned lieutenant on 21 September 1790, and whilst serving in the Mediterranean was promoted commander of the Peterel 16 on 11 January 1796, being detached from the fleet on 23 April to serve under the orders of Captain Horatio Nelson of the Agamemnon 64 off the coast of Genoa in co-operation with the Austrian Army. Leaving the Peterel shortly afterwards, Temple’s next command, the Belette 24, was burned at Ajaccio on 20 October after being deemed unserviceable.

In the autumn of 1797 he commissioned the Jalouse 18 for service in the North Sea, which vessel had been captured by the Vestal 28, Captain Charles White, in May, Operating out of Yarmouth, he was off the Dutch coast in 1798 and on 13 February 1799 took the prolific French privateer brig Jason 14 off the Texel, sending her into Harwich. In June he recaptured two merchantmen which had been taken off the Yorkshire coast by a French privateer, rescuing one of them after a chase of six hours off Norway despite her prize-master’s efforts to run her onto the rocks. On 26 June he joined Commander James Boorder of the Espiégle 16 in leading the boats of a small squadron commanded by Captain Robert Winthrop of the Circe 28 in cutting out twelve Dutch merchantmen from the Wadden Sea under the fire of shore batteries, and without suffering a single casualty.

Following the wreck of the Nassau 64, Captain George Tripp, on the Haak Sands on the north side of the Texel on 25 October 1799, Temple was roundly praised for his exertions in rescuing her men, it being proclaimed that the whole crew would have been lost but for his efforts. On 29 November he took the Dunkirk privateer Fantasie 14 off Flamborough Head, which vessel he again sent into Harwich, together with another capture on the following day. A further prize on 5 April 1800 was the small privateer Inattendu 2 which had come out of Ostend, followed days later by the tiny Den Arend 2, and in May by a number of Dutch merchant vessels.

In June 1800 the Jalouse sailed for the Leith Roads to collect the Baltic trade, and she departed Elsinore on 28 June for the return trip with the homeward-bound convoy. On 27 August she sailed from Sheerness for Elsinore with another convoy, reaching the Danish port on 14 September and immediately departing for a cruise off Norway. At the end of October she sailed from Leith in search of a privateer, and shortly afterwards was reported to be collecting a convoy from St. Petersburg, Temple eventually left the Jalouse upon being posted captain on 1 January 1801.

In July 1803 he was ordered to commission the St. Albans 64 as a floating battery at Chatham, and she sailed from that port for the Long Reach on 24 August in order to take on stores prior to assuming her station as a guardship at the mouth of the Thames. On 12 January 1804 she ran aground off Languard Fort near Felixstowe and a party of soldiers from the West Essex militia was detailed to assist in bringing off her stores before she was safely re-floated. 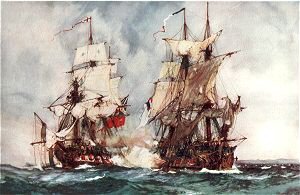 In June 1804, whilst commanding the St. Albans at the mouth of the Thames, Temple attended court to surrender himself, having ‘rescued himself out of the custody of a sheriff’s officer’ after being arrested for debt on four actions against him. As he had not resorted to any violence in effecting his ‘rescue’ he was simply ordered to pay the debt and all the costs by the Lord Chief Justice of the King’s Bench, Lord Ellenborough.

In March 1805 the St. Albans arrived at Yarmouth, and from the end of April she flew the flag of Rear-Admiral Thomas Macnamara Russell when undertaking a cruise off the Dutch coast before returning to port on 18 May. Another cruise off the Texel with Russell’s flag ended with a return to Yarmouth on 3 June, and shortly afterwards an express from the Admiralty was received ordering the squadron to the Downs to join Admiral Lord Keith. On 24 June Keith briefly shifted his flag into the St. Albans, and on 26 June Temple brought a court-martial against one of his own lieutenants, Charles Adam Lennock, for disobedience of orders and disrespect, a charge of which the officer was acquitted. The St. Albans then sailed with Admiral Russell for the Texel once more, and after returning to the Downs she remained under the orders of Lord Keith into the new year.

In December 1806, upon the St. Albans being docked for a refit, Temple was appointed to the Malabar 54 at Woolwich, being present in the Yarmouth Roads in March 1807 before patrolling off the Dutch island of Gooree. On 17 May she hoisted a Blue Peter at Sheerness in order to go out to South America with stores destined for the campaign in the River Plate, and she eventually sailed from Portsmouth on 25 June with a convoy of some ten vessels. Shortly after arriving at Rio de Janeiro on 7 October Temple fought a duel with one of the Malabar’s passengers, Brigadier-General Henry Mordaunt Clavering, and he was wounded with a shot through the body. With the defeated British forces by now having signed an armistice with the Spanish in the River Plate, the Malabar departed for the Cape on 27 October, and she left that colony on 10 February 1808 to collect a convoy at St. Helena prior to arriving back at Portsmouth in May. After going around to Sheerness the Malabar then went up the Thames at the end of the month, whereupon Temple left her.

In October 1808 he was presented to the King at a levee on the occasion of his appointment to the frigate Crescent 36, and on 30 November he sailed from Yarmouth for Gothenburg. During her voyage to the Baltic the Crescent was driven ashore in thick weather off Jutland on 5 December, and although several boats and a raft were launched allowing sixty-two men to get ashore the frigate went down with a loss of Captain Temple and two hundred and twenty-five men and women.