Bromedge was commissioned lieutenant on 21 September 1756, and during early 1759 commanded the cutter Duke William in the Channel where he was active in anti-smuggling operations. 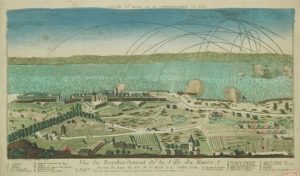 The Bombardment of Le Havre 1759

On 3 April 1759 he was promoted commander of the Wolf 16, which he commanded at Rear-Admiral George Brydges Rodney s bombardment of Le Havre in July, retaining her into the following year. From 1761 he had the Happy 8, being employed initially in the Downs and later in the preventative service off Scotland. During January 1764 his sloop attended the conveyance of the Prince of Brunswick from the Helvoet Roads to England for his marriage to Princess Augusta. At the beginning of 1765 Bromedge was ordered to leave the Scottish coast and fit the Happy out for service in the Channel, but she drove ashore under his captaincy at Winterton near Great Yarmouth on 14 September 1766 and was wrecked.

In March 1772 he joined the sloop Savage 8, serving at Boston, and he retained her on the North American station, being at Halifax in the early part of 1776 before returning to New York. On 7 April of the latter year his watering party was attacked by five hundred rebels on Staten Island, and although the Savage s gunfire reportedly killed twenty-four of the enemy he was unable to bring off his own men. He retained the sloop until she was wrecked in a heavy gale off Scatarie Island, Nova Scotia, on 16 September 1776, her crew being saved.

In March 1777 Bromedge was appointed to the storeship Buffalo 30, going out to North America in July, and when she was reinstated as a 60-gun vessel in the following spring he was finally posted captain with seniority from 29 April 1778, some nineteen years after his previous promotion. He subsequently commanded the Buffalo in the Downs with the flag of Vice-Admiral Matthew Buckle, but was present in the Channel fleet retreat of August 1779, and after joining the Plymouth station was with the squadron under Captain Charles Fielding that detained the Dutch convoy on 31 December. In June 1780, by which time he had left the ship, he was brought to a court martial by his officers for mal-practice, although when they could not prove their assertions he was acquitted.

Bromedge s final command was the ancient Dutch prize Princess Caroline 54, which he joined in July 1781 and fitted out at Sheerness. Having taken her out to the West Indies at the beginning of the following year he captured the privateer Tartare 24 on 28 June before returning home with a convoy in August to be paid off at the end of the year.