In September 1735 Lockhart entered the service aboard the Portland 50, Captain Henry Osborn, and from 1737-8 he served on the Diamond 40, Captain Charles Knowles, going out to Africa and the West Indies but being laid low by a fever which delayed his career progression for some time. In 1739 he joined the Romney 50, Captain Henry Medley, seeing service off Newfoundland and in the Mediterranean, and thereafter was aboard the sloop Trial, Captain Rowley Frogmere. He later served aboard the Lively 20 and Ruby 50 under the same officer, ending this period of constant service when taken ill once more in Barbados. 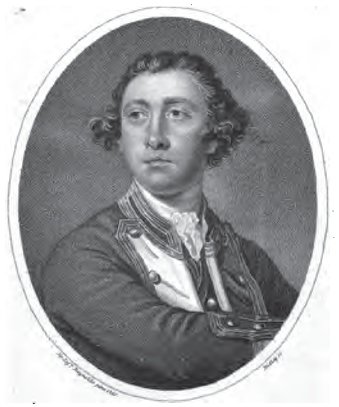 He passed his lieutenant s examination on 28 September 1743, and on 21 October was promoted to this rank, being appointed to the Dover 44, Captain Hon. Washington Shirley, and seeing employment in the North Sea. He afterwards joined the Chester 50, Captain Francis Geary, serving in North America, and after returning home was appointed to the Devonshire 66, Captain Temple West, which flew the flag of Rear-Admiral Peter Warren and was present at Vice-Admiral George Anson s action off Cape Finisterre with Admiral Marquis de La Jonqui re on 3 May 1747.

Lockhart subsequently enjoyed a spell of independent command from July 1747 aboard the fireship Vulcan 16, and he commanded the Kent 64 during 1748 in an acting capacity for the suspended Captain Thomas Fox. He afterwards became first lieutenant of the Portsmouth guardship Invincible 74, Captain William Lloyd, and when this commission finished in November 1752 he returned to Scotland on half-pay. He was re-employed in January 1755 as first lieutenant of the Prince 90, Captain Charles Saunders, and on 22 April he was promoted commander of the sloop Savage 8, earning a quick fortune with the capture of a French West Indiaman carrying a 30,000 cargo.

On 23 March 1756 he was posted captain of the newly commissioned Tartar 28, in which swift vessel he was to perform outstanding service in the Channel, taking countless privateers and merchantmen including the Cerf 22 on 12 August, and the Grand Gideon 26 on 23 October. During the capture of the Mont-Rozier 20 on 17 February 1757 the enemy crew scandalously attempted to board the Tartar after striking their colours. Their infamy saw them suffer losses of thirty-six men killed and a similar number wounded before they finally surrendered, the rest of the men being granted quarter. A sick Lockhart spent the next two months ashore in recovery, and with Lieutenant Thomas Baillie acting for him the Tartar captured the newly launched St. Maria 24 in March. Following Lockhart s return he made prize of the heavily armed Duc de Aiguillon 26, a contest that took over an hour, and saw fifty casualties aboard the Frenchman in comparison to four men killed and one wounded aboard the Tartar.

His greatest feat however came on 2 November with his capture in a three hour action of the privateer Melampe 36, carrying three hundred and twenty men as opposed to his own two hundred. The enemy vessel had been specifically fitted out to capture his ship which by now had become known as the scourge of the French coast; indeed, such was his frigate s reputation that, anecdotally, an outgunned Bristol privateer had managed to obtain the surrender of a superior Frenchman in the dark of night by requesting her to strike to The Tartar, Captain Lockhart . He finished the season with the capture of the French national ship Comtesse de Gramont 18 on 29 October.

As a reward for the impact his captures had made on the protection of their trade Lockhart received awards from the cities of London, Bristol and Plymouth and in early 1758 he was rewarded by the Admiralty with a promotion to the brand new Chatham 50. After a short time at Bath recovering from illness he transferred his crew from the Tartar to the Chatham and returned to his old cruising ground. In company with the frigates Venus 36, Captain Thomas Harrison, and Thames 32, Captain Stephen Colby, he took the French frigate Arethuse 32, commanded by the Marquis de Vaudreiul on 18 May 1759 after a two hour chase, and he later served under Rear-Admiral George Brydges Rodney off Le H vre, then Commodore Robert Duff in Quiberon Bay. 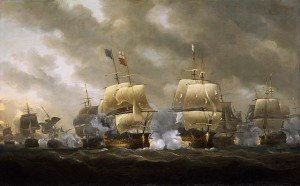 After participating in Admiral Sir Edward Hawke s victory at the Battle of Quiberon Bay on 20 November 1759 he was ordered to set two French sail of the line on fire, and with the flag-captain, John Campbell, being sent home with despatches Lockhart took command of the flagship Royal George 100, retaining her until July 1760. Upon returning to Spithead he transferred to the Bedford 64, serving with the fleet off Brest but being replaced before the end of the year by a temporary captain, Joseph Deane, who was in command when the Bedford took the Com te 32 on 16 March 1761. Lockhart briefly commanded the Bedford once more that summer before going on half-pay in the autumn.

In June 1760 Lockhart assumed the additional name of Ross in accepting the Ross estate of Balnagowan following his brother s death, and in the following year he was elected M.P. for the Lanark Boroughs, although he had no interest in parliamentary affairs. During the peace from 1763-77 he managed his estates with great verve, becoming a renowned agriculturalist, and whilst setting out his stall as a leading advocate of the Highland Clearances in order to enhance farming techniques he also sought better conditions for his tenants.

Lockhart-Ross went back to sea in the autumn of 1777 with the Shrewsbury 74, and was second in the line at the Battle of Ushant on 27 July 1778, losing three men killed and six wounded, and seeing a good deal of action. On 13 August 1778 he succeeded his late brother in the family baronetcy, and on 10 December he vacated the command of the Shrewsbury to Captain Samuel Reeve in order to attend the court-martial of Admiral Hon Augustus Keppel as a result of the political dispute subsequent to the Battle of Ushant.

Lockhart-Ross was promoted rear-admiral on 19 March 1779, being one of the few senior officers who were still willing to serve the controversial administration, and that summer as fourth-in-command in the Channel he hoisted his flag aboard the Royal George 100, Captains John Colpoys and John Bourmaster. Having been despatched on an unsuccessful cruise to the North Sea to hunt down the American rebel John Paul Jones he returned to serve in the Channel fleet s retreat during August. With the allied fleet having left the Channel he then briefly raised his flag in September aboard the Romney 50, Captain George Johnstone, in order to check upon the rumoured congregation of a French invasion force at Cancale Bay, but this proving groundless he returned to Spithead.

Thereafter he fought with distinction at the Moonlight Battle of 16 January 1780, and participated in the Channel fleet campaign from June – December.In January 1781 he presided over the court martial which reprimanded Captain Evelyn Sutton of the Isis 50 for his failure to sufficiently engage the Dutch Rotterdam 50 on 31 December. During Vice-Admiral George Darby s relief of Gibraltar on 12 April 1781 he shifted his flag to the Alexander 74 at the head of a small squadron that had been sent into the bay to defend the victaulling ship from the Spanish gunboats.

In April 1782 he hoisted flag aboard the Buffalo 50 which was briefly under the command of Captain George Robertson, and within the course of the summer he also flew it aboard the Ocean 90 Captain John Bourmaster, and the Bienfaisant 64, Captain John Howorth. During the April-August Channel fleet campaign he was placed in command of a squadron of eight sail of the line and five frigates blockading the Texel, which kept the Dutch fifteen men-of-war within from May whilst an allied fleet of forty sail of the line was at sea. In June his squadron was struck by a flu epidemic that forced it back into the Downs at the end of the month, Lockhart-Ross himself suffering so badly that he struck his flag and went ashore. Despite applying for employment at the end of the year the impending cessation of hostilities meant that he was never required to serve afloat again.

He was promoted a vice-admiral on 24 September 1787 and died at his family seat of Balnagowan Castle on 9 June 1790 after many years of infirmity, being buried at Fearn Abbey Church which had been re-built under his patronage.

He married Elizabeth Dundas, the eldest daughter of the Right Hon. Robert Dundas, the Lord President of the Court of Session in Scotland, and the M.P for Edinburgh in 1762 and had five sons and three daughters. His elder son, Lieutenant-General Sir Charles Lockhart-Ross, served as an M.P from 1786 until 1807, and his second son, James, changed his surname to that of his wife, Farquharson, and rose to the rank of captain in the navy before dying in 1809. Two of his other sons entered the Army, and the other the judiciary. One of his wife s younger sisters married the future Adam Lord Duncan

A strict but not cruel disciplinarian, Lockhart-Ross was admired by his seamen and tenants, with some of the former becoming the latter as a result of his benevolence. During a 1782 famine he made great efforts to keep the Highlanders fed, and he later discounted his rent arrears by a third. Following the Battle of Ushant he was a leading member of the Keppel faction, although he tempered his feelings far more than many of his colleagues in continuing to serve the government. He was an early patron of Captain James Anderson.