Carpenter was commissioned lieutenant on 10 May 1776 and was present at the Battle of Porto Praya on 16 April 1781, being promoted commander of the bomb Terror 8 on 23 July by Commodore George Johnstone in succession to the posted Captain Charles Wood. Having sailed on to the East Indies, he was posted captain for purposes of rank only to the Hermione 32 on 12 August 1782, but his intended command, the ex-French privateer Necker 28, foundered on her voyage out to that station. He returned home aboard the East India Company packet Rodney with Vice-Admiral Sir Edward Hughes’s despatches relating to the Battle of Negapatam on 6 July 1782, reaching the Admiralty on 6 April 1783 via Ireland.

In May 1790 he recommissioned the Winchelsea 32, serving at Plymouth and going out towards the end of October to cruise off the Scilly Islands on impressment service. By 10 December the Winchelsea was back at Plymouth where a delay in her being paid off led to the crew staging a mutiny, whereupon the leader was placed under arrest and many others sent on shore without remuneration. In May 1791 the Winchelsea went out on a cruise from Portsmouth, and in the following month the first lieutenant brought the remainder of the wardroom to a court-martial on a charge of contemptuousness, although they were unanimously acquitted at the trial aboard the Royal William 84 at Portsmouth. Towards the end of August the Winchelsea entered Portsmouth from the west, and Carpenter retained her through to 17 September when she was paid off at that port. 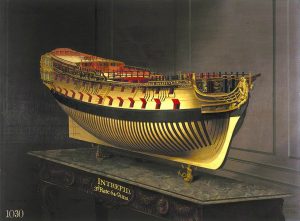 In the last week of February 1793 he commissioned the Intrepid 64 at Plymouth, serving initially in the Channel and taking part in the fleet’s cruise between July and August. On 9 August he arrived in Torbay with Captain Francis Cole of the Eurydice 24, and both set off for the Admiralty to report on the movements of the Brest fleet. In September the Intrepid escorted a convoy around to Plymouth, and within days set off from that port with the Mediterranean convoy. Here Carpenter saw brief service at the occupation of Toulon, and he returned to Plymouth from Coruna in December after a difficult voyage that saw over one hundred and fifty men hospitalised with suspected louse typhus.

During May 1794 the Intrepid departed St. Helens for the West Indies with a convoy, and remaining on the Leeward Islands station she served mostly off St. Domingue in support of the army. In August, being in company with the Chichester 44, Captain Robert Fancourt, she captured the French sloop Sirène 16, and during the early part of 1795 she enjoyed some success in cruising against enemy privateers, taking three in the first two months. On 21 April 1796 Carpenter’s command drove the French corvette Perçante 26 into a cove near Cape François after a ten hour chase in light winds, and once her crew had let her drift ashore and abandoned her he was able to refloat her with little damage, the vessel being added to the Navy as the Jamaica. By November the Intrepid was back at Portsmouth having escorted the Jamaica convoy into the Thames, whereupon she was paid off and Carpenter left her to go on half-pay.

On 19 May 1785 he married Elizabeth Mackenzie of Richmond, Surrey, and had two sons, George and John Delaval, who successively became the 3rd and 4th Earls of Tyrconnel following the death of Carpenter’s brother George in 1805. His eldest son, George, died at Vilnius of fatigue in the service of the Russians opposing the French advance in 1812.Carpenter’s wife died at Bowness, Westmoreland, in 1842 at the age of 73.

From 1790-6 he was the M.P for Berwick-on-Tweed in the government interest, albeit that he was at sea for the greater time of this period.