Having served as a midshipman in the West Indies and North America where in the latter half of the 1730 s he saw employment aboard the Squirrel 20, Captain Peter Warren, Gayton was eventually commissioned lieutenant on 11 March 1742 at the age of thirty. 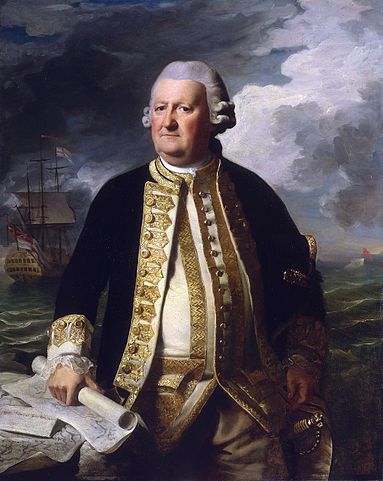 A further promotion to that of commander occurred on 12 August 1744, his first task being the commissioning of the French built storeship Bien Aim 18 for service in the Leeward Islands before he voyaged north to America in 1745. Posted captain to the forty year-old Mermaid 50 at Boston by Commodore Peter Warren on 6 July 1745, he returned home with a convoy in the following year and served with her until September 1747, being briefly employed in the Western Approaches.

Gayton remained in domesticity until the beginning of the Seven Years War when he recommissioned the Antelope 50 in May 1756, retaining her until August when he moved to the ancient guard-ship Royal Anne 90 at Spithead. In April 1757 he was appointed to the Prince 90, flagship of Vice-Admiral Henry Osborn in the Mediterranean, and in the summer of the following year moved to the St. George 90.

In command of the St. George he went out to the Leeward Islands in November 1758, and in the following year commanded her at the failed attack on Martinique. During the subsequent reduction of Guadeloupe Gayton led many of his fellow officers in making known their concern that the citadel was impregnable to an attack from the sea. Commodore John Moore nevertheless ordered him to engage the fortress and took the unusual and somewhat insulting step of following up his verbal order in writing. Having seen the St. George engaged for several hours under heavy fire with no prospect of success, Moore then signalled her to withdraw, and when she failed to do so he despatched an officer to repeat the order verbally. The outraged Gayton, who had been slightly wounded during the long action, refused to disengage unless given another written order that countermanded the previous written order to attack, but fortunately the impasse was resolved when the citadel ceased firing. The St. George later joined the grand fleet in the Bay of Biscay and Gayton left her in 1760.

From 1769 he commanded the guard-ship San Antonio 64 at Portsmouth, briefly flying the flag of Vice-Admiral Francis Geary, and on 18 October 1770 he was promoted rear-admiral.

From May 1774 he was the commander in chief of the Jamaican station, flying his flag in Port Royal harbour aboard the Antelope 50, Captain Archibald Dickson, and from 1775 Captain William Judd. During this office his main tasks were in preventing the replenishment of the rebellious American colonies, in the process of which his cruisers captured some two hundred and thirty-five vessels at much reward to his pocket, and in dealing with the French at Cape Fran ois, although correspondence rather than warfare pursued those arguments. Before returning home on 28 April 1778 the Antelope fell in with what was perceived to be a more powerful enemy, but despite the fact that he was by now desperately infirm Gayton promised the crew that he would sit on the quarterdeck and watch them fight for as long as they were able to.

Gayon married firstly Judith Rawlins in Boston on 3 August 1738, and secondly Elizabeth Legge, a relative of the Earl of Dartmouth, in February 1779. Following his death his widow married Captain Thomas Newnham. He had many children from his first marriage which he struggled to support in his younger days, and sadly he was only survived by one son, the Reverend George Clark Gayton.

Admiral Augustus Hervey, the 3rd Earl of Bristol, commented that Gayton was better suited to the role of a boatswain than an officer, but that he was popular with his men. Gayton ensured the promotion of both of his nephews whilst in command of the Jamaican station.