On 19 June 1791 Gardner was commissioned lieutenant of the flagship Centurion 50, Captain William Albany Otway, by Rear-Admiral Philip Affleck, the commander-in-chief at Jamaica.

It seems likely that he was promoted commander of the Hound 16 at Jamaica on 1 December 1793, in which sloop he arrived at Kingston on 2 April 1794 with the French brig Liberté 14, although this vessel was officially the prize of the Alligator 28, Captain Thomas Surridge. 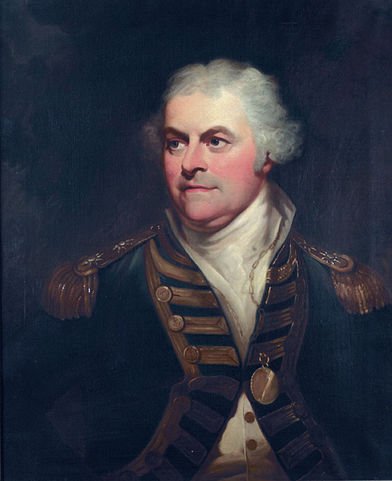 Gardner was a son of Admiral Lord Gardner, here portrayed.

Seeing further service on the Jamaican station, Gardner was posted captain on 7 May 1794 and assumed the command of the Iphigenia 32 from the late Captain Patrick Sinclair, who had died two days previously on St. Domingo. He was thus present at the capture of Port au Prince in a combined operation on 4 June. In May 1795 he conveyed Lieutenant-General Sir Adam Williamson from Port Royal to St. Domingo to take up the position of governor, but a convoy that sailed under his escort was attacked by four French privateers which took several prizes. On 21 March 1796 he served under the orders of Rear-Admiral William Parker in the Jamaican squadron’s unsuccessful attack on Léogane, St. Domingo. The Iphigenia was next under orders to sail from Port Royal in the first week of June with a huge convoy of one hundred and fifty vessels, and after seeing the Bristol and Liverpool ships to safety she arrived at Portsmouth on 26 August with several transports before being paid off in September.

In May 1801, after five years on the beach, he was appointed to the Princess Charlotte 36 which arrived at Sheerness on 2 August and twelve days later sailed for the Downs. The frigate subsequently went around to Portsmouth before proceeding for Ireland, off the south-west coast of which, in September, she fell in with several ships of the Jamaica convoy and escorted them into the mouth of the Channel. She thereafter served at Cork as the flagship of Gardner’s father, Admiral Lord Gardner, until returning to Plymouth on 28 March 1803 with seamen to man the fleet following the renewal of hostilities with France. At the turn of April, she briefly flew the flag of Admiral Lord Keith in the Hamoaze, and she was paid off at Plymouth later that month.

In the last week of May 1803, Gardner recommissioned the Ruby 64 at Chatham, and on 7 July his command sailed from that port for the Long Reach, only to be detained for some days by contrary winds. Dispatched to blockade the Texel, she sent a couple of prizes into Yarmouth on 17 August, one of which was a whaler under Prussian colours, and she returned to that port on 11 September.

In October 1803 he and his officers exchanged from the Ruby into the Gelikheid 64 with Rear-Admiral Edward Thornbrough and Captain David Colby, and his new command raised the flag of Rear-Admiral Thomas Macnamara Russell at Yarmouth, prior to sailing with that officer to the Humber on 17 November, where she remained until the following spring.

In May 1804 Gardner rejoined the Princess Charlotte 36, which at the end of May went out of Plymouth Dock after a thorough refit, although she did not leave the Hamoaze for the Sound until another two months had elapsed. On 13 August she sailed for Cork where she arrived on the 24th to collect a twenty-sail convoy for Jamaica, and she departed the Irish port on 1 September to reach Port Royal on 12 November. Dispatched on a cruise, she captured the French brig privateer Regulus 14 from Guadeloupe on 13 December after a chase of seven hours which culminated near Cape Antonio, Cuba. A further prize, valued at 35,000 dollars, was a Spanish vessel bound from Cartagena to Barcelona which was sent into Port Royal shortly afterwards, and in early February 1805 she arrived at Jamaica with a Spanish vessel in transit from Boston to Vera Cruz, prior to escorting a convoy through the Gulph of Mexico. Reports in May that she had been wrecked proved to be false, and in November Gardner returned home from Barbados aboard the Ramillies 74, Captain Francis Pickmore, having resigned the command of the Princess Charlotte following an attack of yellow fever.

He thereafter remained unemployed, although he did participate in Vice-Admiral Lord Nelson’s funeral on 9 January 1806. Later that summer he took a tour of the Lake District.