1739-1813. Born on 8 March 1739 at Bagshot, Surrey, he was the son of Joseph Fairfax, an officer in the Horse Guards from a family long settled in Yorkshire, and of his wife Mary Anne. He was descended from the parliamentary commander-in-chief in the Civil War, Lord Thomas Fairfax.

Fairfax entered the navy in 1750 and initially served in the Mediterranean under Captain Hon. Augustus Keppel aboard the Centurion 60. His next employment was with the Mars 64, Captain John Amherst, and from 1754 he saw duty on the Garland 24, commanded by Captain Marriot Arbuthnot at Virginia until returning home in 1757.

During the Seven Years War he was commissioned lieutenant on 20 December 1757 of Rear-Admiral Henry Harrison’s Plymouth-based flagship Duke 90, Captain Thomas Hanway, and from 1758-60 he was aboard the Eurus 20, Captain John Elphinston, which took part in the St. Lawrence operations and the capture of Quebec.

He remained unemployed from August 1760 until June 1766 when he was appointed to command the cutter Greyhound 4, serving off his new wife’s hometown of Burntisland, Fifeshire. At the end of this commission in June 1769 he found himself on the beach once more. 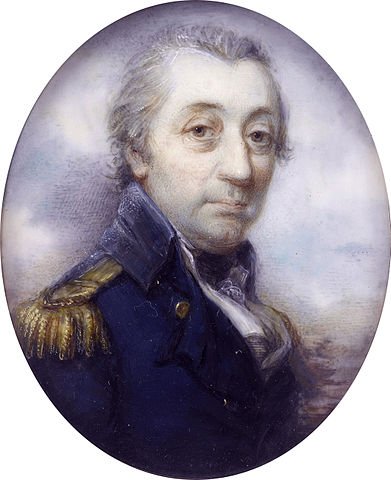 During 1777 Fairfax had the command of the small sloop Hazard 8, sailing in the early part of the year from Sheerness for Fifeshire. On 13 May 1778 he was one of the beneficiaries of the King’s Review of the Fleet, being promoted commander out of Admiral Hon. Augustus Keppel’s flagship Prince George 90, Captain Jonathon Faulknor, to the cutter Alert 14. One of his first acts was to look into the harbour at Brest, but he was chased off by a man-of-war which fired over a dozen shots at his command and sent her scurrying back to Plymouth. During the operations which culminated in the Battle of Ushant on 27 July the Alert defeated the lugger Coureur 14 in a brisk action in sight of the fleet on 17 June, but on 17 July she was captured in the Channel by the Junon 40. Having been detained as a prisoner of war amidst claims that he was placed in irons upon arriving at Brest, Fairfax returned to England some time before the spring of 1780.

He briefly commanded the Belle Poule 36 in a temporary capacity for Captain Philip Patton during 1781 before being posted to the frigate Tartar 28 on 12 January 1782, in which he sailed for Plymouth on 1 February from Portsmouth and arrived in Cork on 19 March, prior to going out to Jamaica with the trade in April. Remaining on that station, he drove the rebel privateer Count de Grasse ashore to the west of Havana on 7 August, and in the autumn he sailed to North America with Admiral Hugh Pigot’s Leeward Islands fleet. During November the Tartar arrived at Port Royal from New York, having originally been unable to get into Charleston because of rough weather, and then having been diverted to Jamaica with dispatches by Admiral Pigot. She later captured the French ship Terriste 24, laden with cordage and bale, but Fairfax failed to assist Captain Horatio Nelson in his abortive attempt to retake Turk’s Island in the spring of 1783, sailing away without apparent reason. The Tartar subsequently returned to New York to assist with the evacuation of loyalist families, and after going home she was paid off in November.

Fairfax remained unemployed throughout the next ten years of peace, and it was not until October 1793, some eight months after the commencement of the French Revolutionary War, that he was appointed to the Sheerness 44. This vessel was at Portsmouth at the beginning of 1794 before going out for a cruise off Cherbourg under the orders of Rear-Admiral John MacBride. She was later to be found cruising out of Leith, and at the beginning of May she escorted a convoy from that port to the Baltic. She began her return voyage in July, and in August hoisted the flag of Rear-Admiral Henry Harvey in the North Sea, in which employment she was still engaged at the commencement of the following year when she came into the Downs, although in early December it had been reported that she had gone aground in the Texel with grave concerns for her preservation.

In May 1795 Fairfax was appointed to the Repulse, which had been reduced from a 64-gun ship to a frigate of 40 guns at Woolwich, and after she came out of dock in the early summer she was ordered to join the squadron in the North Sea. During early October she sailed for Leith, and in November it was announced that she was to join Rear-Admiral Thomas Pringle’s squadron in the North Sea once her main-yard had been repaired. She captured the Dunkirk privateer Petit Perone 8 off the Dutch coast on 3 December, and she served with the North Sea fleet through to the following summer.

In September 1796 Fairfax became the flag-captain aboard the Venerable 74 in the North Sea fleet to Admiral Adam Duncan, with whom he had first served forty-six years previously. During the mutiny in the North Sea fleet that broke out on 27 May 1797 the Venerable remained loyal due to the sheer force of Duncan’s personality and will, and she carried his flag at the Battle of Camperdown on 11 October where she suffered casualties of fifteen men killed and sixty-two wounded. Fairfax was accorded the honour of delivering the victorious admiral’s dispatches to the Admiralty on the early morning of 16 October, and having breakfasted with the first lord, Earl Spencer, he then had an audience with the prime minister, William Pitt, before leaving town a day later to return to the fleet with news that he was to be knighted and Duncan created a viscount. By 8 November he was back in London to attend a dinner given by Lord Spencer to Duncan and the defeated Dutch admirals, and he was further honoured on 14 February 1799 by being appointed a colonel of marines.

In the meantime the badly damaged Venerable, which as a consequence of damage sustained in the Battle of Camperdown had at first been considered fit only for the scrap yard, was paid off in January 1798 and she remained under repair at Chatham until the spring of 1799, when Fairfax recommissioned her. Towards the end of March she dropped down to Blackstakes to take on her powder, and she arrived at Portsmouth on 14 April before putting out towards the end of the month to join the Channel fleet. Following the Brest Fleet’s breakout on 25 April the Venerable saw service under Rear-Admiral Hon George Cranfield Berkeley off the coast of France, and she was later attached to Rear-Admiral Charles Pole’s squadron which blockaded five Spanish sail of the line from Ferrol in the Aix Roads.

In early February 1800 the Venerable was at Spithead when her lieutenant of marines, a midshipman, six seamen, three boys and a woman were drowned through her cutter oversetting, although two other men were rescued by a Portsmouth wherry. She then formed part of Rear-Admiral James Whitshed’s squadron which reached Torbay towards the end of the month, and where in April she was with the main body of the fleet. She was briefly at Portsmouth towards the end of August before sailing to rejoin the fleet, and Fairfax remained with her until being promoted rear-admiral on 1 January 1801, following which advancement he saw no further service.

He was promoted vice-admiral on 13 December 1806 as a result of the Admiralty’s determination to have his junior on the list, Sir James Saumarez, raised to that rank, and he died at Edinburgh on 7 November 1813.

On 23 July 1767 Fairfax married Hannah Spears, the daughter of the Reverend Robert Spears of Burntisland, Fife, by whom he had a daughter prior to her death in 1770. In April 1772 he married Margaret Charters, the cousin of Admiral Sir Samuel Grieg of the Russian service, by whom he had four sons and three daughters. His youngest son, Colonel Henry Fairfax, who appears to have been the only one of five sons to survive their father, later became a baronet in recognition of Fairfax’s war service, whilst his second daughter, Mary Somerville, was a celebrated science writer, mathematician and astronomer.

His residence was in Burntisland, Fifeshire. In 1797 the newspapers reported him to be a ‘plain and unassuming man’ who was ‘a most active and intelligent officer’.