1752-1782. Born on 7 February 1752, he was the third son of the Whig politician Charles Sloane, the 1st Earl Cadogan, and his wife, Hon. Frances Bromley, daughter of the 1st Baron Montfort. He was the half-brother of Admiral Earl Cadogan, who was born in May 1783, eight months after Thomas Cadogan s death.

Cadogan was commissioned lieutenant on 26 July 1770 and promoted commander on 11 November 1776. From March 1777 he commanded the sloop Porcupine 16 on the Jamaican station. Whilst escorting a large convoy in August his vessel was struck by lighting and set afire, but despite the near proximity of the convoy it was a passing schooner which responded to his signals of distress and took him in tow. After reaching St. Augustine Cadogan converted his sloop into a brig prior to making the best of his way to Jamaica. 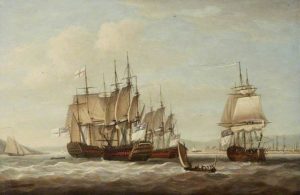 French ships captured at the Battle of the Saintes. Cadogan lost his life when the Glorieux foundered whilst on passage to England.

He was posted captain on 20 February 1779 and succeeded Captain Henry Bellew upon the French built Licorne 36, which vessel had been captured by the Channel fleet in the previous June. She took the French privateer Audacieuse 24 after a half-hour engagement on 31 May 1779 whilst escorting a convoy out to Newfoundland, inflicting casualties of twenty-two men killed and seventeen wounded for the return of one man wounded. Having lost her convoy in a gale on 15 June she then captured he General Sullivan 24 near St. Johns four days later.

The Licorne was copper-bottomeded at Chatham in the early part of 1780, and she was in company with the Prudente 36, Captain Hon. William Waldegrave, at the capture of the French frigate Capricieuse 32 on 5 July 1780, this vessel being set alight and destroyed. During August he joined Captain John MacBride of the Bienfaisant 64 who had been ordered to take in convoy a fleet of some hundred vessels at Cork, and after witnessing the capture of the French privateer Comte d Artois on 13 August he sailed to the Leeward Islands in December.

During 1781 he served on the Jamaican station, and following the Battle of the Saintes on 12 April 1782 he was ordered to commission the prize ship Glorieux 74. This was one of many vessels from Rear-Admiral Thomas Graves convoy that fell victim to the Central Atlantic Hurricane of September, going down two days later when returning from Jamaica with the loss of all hands. .