Atkins early career was spent as a prot g of Captain Erasmus Gower, being on board the Edgar 74 commanded by that officer during 1780-1when she was stationed at Gibraltar after arriving there with Admiral Sir George Rodney s relieving fleet that had fought the Moonlight Battle of Cape St. Vincent on 16 January 1780. He was commissioned lieutenant on 20 September 1784 and was the third lieutenant of the Lion 64, commanded by the knighted Sir Erasmus, during Lord Macartney s embassy to China from 1792-4. After returning home he continued as first lieutenant to Gower aboard the Triumph 74 in the Channel fleet.

He was promoted commander on 6 December 1796, and in command of the brig Star 18 went out to the Cape with a convoy in March 1797, conveying the stranded crew of the Garland 28, Captain James Athol Wood, to the Cape after their ship had been wrecked off Madagascar when capturing a merchantman in July. Atkins left the Star in the following year, having been posted captain at the Cape on 29 May 1798, and he returned to England with the Dordrecht 64.

He continued to command the Dordrecht in an acting capacity in the Swale, North Kent before joining the Sans Pareil 80 in January, sailing to join the Channel Fleet from Portsmouth in March, and being present when Rear-Admiral Charles Morice Pole s squadron failed in an attack on the five Spanish sail of the line from Ferrol in the Basque Roads in July following the breakout of the Brest fleet on 25 April 1799. He left the Sans Pareil in August.

In January 1800 Atkins commissioned the Dutch prize Wilhelmina 32 before leaving her in April, and in June he brought another ex-Dutch frigate, the Waakzamheid 28, into the Downs, from where in August he joined Vice-Admiral Archibald Dickson s expedition to the Baltic. The Waakzamheid later sailed up the Thames from Sheerness in September, and from early 1801 Atkins commanded the Princess Royal 98, flagship to Rear-Admiral Sir Erasmus Gower in the Channel, this vessel being paid off at Portsmouth in April 1802. 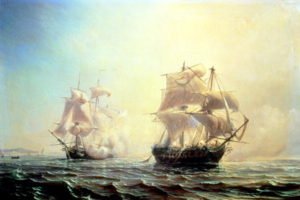 Atkins spent much of his career as a captain in command of the frigate Seine, seen here in her earlier career as the French frigate Embuscade in action with HMS Boston.

In May 1802 he joined the twelve-pounder frigate Iris 32 at Sheerness, engaged in ferrying Dutch troops to Lymington, and after returning to the Kent port he departed on an anti-smuggling cruise in the North Sea, being placed in command of a small squadron of sloops and brigs prior to leaving the Iris in August.

From November 1802 he commanded the French built twelve-pounder frigate Ambuscade 36, briefly flying the flag at Deal of Rear-Admiral Thornbrough in March 1803 and then leaving Sheerness with the Baltic trade at the end of May before returning to the Nore at the beginning of July. He subsequently saw service in the North Sea before returning to Sheerness in December and then going around to Portsmouth with a small convoy. This vessel was renamed the Seine 40 in January 1804 following the recapture of the previous Ambuscade by the Victory 100, Captain Sam Sutton, some months earlier, and in April Atkins took her out on a cruise off France.

In October 1804 the Seine sailed for Cork with troops from Plymouth, and there she collected the Africa and West India trade which she took out early in the new year. After capturing the privateer schooner Pers v rante 5 on 30 April her boats made a prize of the armed schooner Concepcion on 27 May off Aguadilla, Puerto Rico, despite the best efforts of that vessel s emboldened passengers. Three weeks later she destroyed a sloop and captured a felucca off Puerto Rico. The Seine was later attached to Rear-Admiral Hon. Alexander Cochrane s Leeward Islands squadron during the operations that resulted in the termination of Rear-Admiral Jean Baptiste Philibert Willaumez s cruise on 18 August 1806. At about the same time Atkins embarked the Venezuelan General Francisco de Miranda at Aruba, who was to meet Cochrane and seek his assistance in an attempt to liberate Venezuela from the Spanish. In November the Seine returned to home waters from the West Indies.

Continuing with the Seine, in April 1807 Atkins was sent from Portsmouth to patrol off Cherbourg and maintain a watch on a French frigate lying in that port. He returned to Portsmouth at the beginning of October before going out on a cruise a week later, and at the beginning of December left Portsmouth for the Channel Islands with a convoy, capturing the Morlaix-based privateer lugger Sybille 14 on Boxing Day. During 1808 Atkins took the Seine out to the northern coast of Spain where he became the senior officer and co-operated with the local patriots before sailing for Plymouth in October.

In May 1809 the Seine left Plymouth to cruise off Rochefort, and she captured the Spanish vessel El Cassamero 28, bound for France from Buenos Aires with specie that had originally been intended for the use of the Spanish patriots, but which through subterfuge had been diverted for the use of the usurper, King Joseph Buonaparte, in Spain. On 22 July she took the French letter of marque Auguste 18 from Bordeaux after a nineteen-hour chase, and further captures were the French Z phyr 18 in the Channel on 9 October and the highly successful privateer brig Rodeur 16 off Bordeaux on 25 October after a thirty-six hour chase. However, Atkins enjoyed less good fortune on 30 October 1809 in Bay of Biscay when the Surveillante 38, Captain Sir George Ralph Collier, took the French corvette Milan 18, bound for Guadeloupe with despatches, despite the fact that Atkins had first seen and chased her. The Seine returned to Plymouth at the end of December.

During the early part of 1810 Atkins served under the orders of Captain Sir Joseph Yorke in the Basque roads, and at the end of July recaptured the British West Indiaman Starling in the harbour mouth off Brest, from which port he returned to Portsmouth in early September before promptly being despatched off Brest once more.

Atkins was appointed to the Defence 74 on 24 February 1811 and was employed in the Baltic, where on 5 July he led a small squadron in defeating a Danish gunboat attack on a convoy off Hielm Island, capturing four of the enemy vessels in the process. This posting ended in tragedy when the Defence was wrecked in the same storm that saw the loss of her consorts, the St. George 98, on 24 December, and the Hero 74 on Christmas Day. Atkins was amongst the two thousand men who lost their lives in the wreck, his body being one of the many washed ashore with some accounts stating that he had reached the land alive but expired shortly afterwards. The Danish authorities buried him with military honours.

Atkins was a renowned navigator.