1768-1817. He was the second son of James Baker and his wife Nancy, and was born in Bristol. His mother s family came from Ludlow in Shropshire and was related to Admiral James Vashon, who also came from that town.

Baker entered the service in December 1781, joining Commander James Vashon aboard the Alert 14, which went out to the Leeward Islands with Admiral Sir George Brydges Rodney in early 1782. She was present at the Battle of the Saintes on 12 April, and two days later Vashon was posted to the Prince William 64, taking Baker with him. He afterwards remained with Vashon once the fleet reached Jamaica and that officer became flag-captain to Rodney aboard the Formidable 90, and then both transferred to the Sibyl 28, which was paid off in July 1783 after returning to England.

In January 1784 Baker joined the Plymouth guardship Bombay Castle 74, Captain Herbert Sawyer, who was succeeded in the following year by Captain Robert Fanshawe. He then rejoined Vashon aboard the Europa 50 in 1786, transferring later to the Expedition 44 with both ships flying the broad pennant of Commodore Alan Gardner at Jamaica. Baker remained on this station for three years. 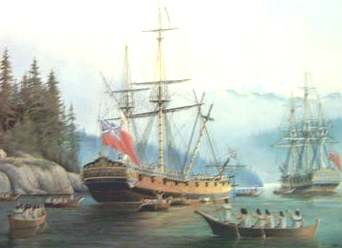 Baker served upon the Discovery during the Vancouver Expedition that left England in 1791, rising to become her first lieutenant when she came home in 1795.

One of the lieutenants aboard the Europa had been George Vancouver, and when Baker was commissioned lieutenant on 19 November 1790 it was in order that he could serve as the third lieutenant of the Discovery to that officer for his voyage of exploration to the north-west coast of America, which departed England in April 1791. Somewhat inauspiciously Baker sustained serious injuries in the early stages of the voyage when attempting to prevent a brawl at Tenerife, but he came into his element in the Pacific and was responsible for producing many charts for the expedition. By November 1794 he had become the Discovery s first lieutenant, and he brought her into the Thames on 20 October 1795 after Vancouver had left her in the River Shannon, Ireland, in order to return to London.

Not long after his arrival home Baker rejoined Captain Vashon aboard the Pomp e 74 in the Channel, and he was present when the fleet mutiny broke out at Spithead on 16 April 1797.

On 1 March 1799 Baker was promoted commander and appointed to the Calypso 16 at Plymouth, with which he took a convoy out from Cork to Jamaica in company with the Crescent 36, Captain Granville Lobb. On 15 November the men-of-war were attacked in the Mona Passage by a Spanish squadron consisting of the Asia 64, Amphitrite 44 and Galgo 16, but they managed to protect the convoy and the Crescent even captured the Galgo. Whilst off Cape Tiburon on 12 April 1800 the Calypso s cutter under the command of the master, William Buckly, cut out the heavily armed schooner Diligente 6, and remaining on the Jamaican station the Calypso conveyed troops from Jamaica to Honduras in March 1801.

On 21 November 1801 Baker was posted to the Port Royal guardship Abergavenny 54, although his rank was only confirmed with seniority from 26 April 1802. Shortly afterwards he was appointed to the Ganges 74 in succession to Captain Thomas Fremantle, which ship had just arrived in the West Indies with Commodore William Essington s reinforcement for the Jamaican station, but with peace having been established he returned to Plymouth in early September as a passenger.

After a long period of unemployment Baker joined the twelve-pounder Castor 32 in 1805, serving out of the Leith station where his patron, Rear-Admiral Vashon, was the commander-in-chief before going into Sheerness for repairs in the following spring, whereupon he left her.

In May 1808 he was appointed to command the Tartar 32 at Leith, and on 3 November, whilst escorting a convoy off the Naze of Norway, she captured the newly launched Danish privateer Naargske Gutten 7 after a three and a half hour chase. Serving off the Danish coast in May 1809, he sent in his boats on the 15th to take a four-gun privateer off Courland which he had driven on shore near Felixberg .The crew fled ashore and with the aid of local civilians they began firing at the British boats. Most fortuitously one of the prize crew discovered that the enemy had attempted to booby-trap the magazine by placing a lighted candle in a twelve pounder cartridge of gunpowder, and it was de-fused after burning to within a half-inch of the powder, and before it could blow the ship and the boarding party apart.

In January 1810 the Tartar arrived back at Portsmouth from a cruise, and in February went into Plymouth for repairs before sailing out to the Baltic for the rest of the year. She then entered Portsmouth once more in January 1811, prior to heading for the North Sea. On 27 March the Tartar dramatically tipped the scales in the defence of the captured island of Anholt in the Katteget when she arrived from Yarmouth to scatter a flotilla of Danish gunboats and thereby allow Captain James Wilkes Maurice to repulse the enemy.

Whilst on a cruise off the Russian coast the Tartar grounded near Hiiumaa Island, Estonia, on 18 August 1811 and after four days hard pumping the resulting leak forced Baker to beach her on nearby Vormsi and set her on fire. The crew sought refuge ashore and were soon brought off by the frigate Ethalion 36, Captain Edmund Heywood. At the resultant court martial in Portsmouth on 23 October Captain Baker, his officers and crew were honourably acquitted for the loss of their frigate.

He did not see any further service at sea but was placed in command of a prisoner of war camp at Stapleton in Bristol where he remained from 1812-14.

He married Elizabeth Weyermann, a niece of James Vashon, on 28 May 1797 in St. Mary Newington, London, and had three daughters and seven sons, including Admiral James Vashon Baker and General Sir William Baker.

Baker was an esteemed cartographer and surveyor. Mount Baker in the state of Washington is named after him. Much of his employment when not on active service was spent working on his charts in order that they could be published. He lived at Presteigne, Radnor, and was a great friend of Peter Puget who had been his senior lieutenant in Vancouver s voyage, and who came to live nearby.