Died 1799. He was the son of the Scottish-born General Sir David Lindsay and of his wife, Susannah-Charlotte Long, and was the nephew of Rear-Admiral Sir John Lindsay.

Lindsay was commissioned lieutenant on 30 September 1793, and was the second lieutenant of the Aquilon 32, Captain Hon. Robert Stopford, at the Battle of the Glorious First of June in 1794. It appears that he remained with Stopford when that officer removed to the Phaeton 38 in July, serving in the Channel and in Commodore John Willett Payne’s squadron that collected the royal bride, Princess Caroline of Brunswick, from Cuxhaven on 28 March 1795. The Phaeton played a particularly distinguished part in Cornwallis’ Retreat on 17 June by letting the her sheets and signalling to an imaginary fleet to convince the French that reinforcements were approaching, and Lindsay was the frigate’s first lieutenant when Stopford’s squadron captured the corvette Bonne Citoyenne 20 off Cape Finisterre on 10 March 1796, this vessel being part of Rear-Admiral Pierre-César-Charles-Guillaume Sercey’s East India-bound convoy which had departed Rochefort on 4 March. 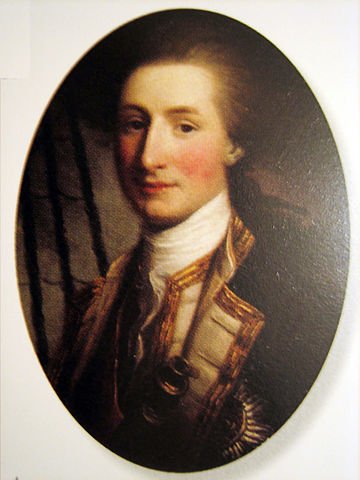 In June 1796, having been promoted commander, Lindsay commissioned the prize Bonne Citoyenne, taking a convoy from Portsmouth around to the Downs at the beginning of November and coming back into the Hampshire port a couple of weeks later with a valuable prize from Surinam, laden with cotton, indigo and coffee.

Going out to the Mediterranean in the winter, the Bonne Citoyenne was present at the Battle of Cape St. Vincent on 14 February 1797, having earlier been the vessel that had reported the strength of the Spanish fleet to Admiral Sir John Jervis. Lindsay was detached afterwards with a squadron led by Captain Velters Cornwall Berkeley of the Emerald 36 with the intention of capturing the disabled Santisima Trinidad 130, and there was later some suggestion that Berkeley did not engage the mighty four-decker as he could not count on Lindsay’s support . Having been posted captain on 6 March, on which day he also inherited his father’s baronetcy, Lindsay left the Bonne Citoyenne, as was the custom for a promoted officer.

In February 1798 he was appointed to the sloop Daphne 20, which vessel had been recaptured from the French in the Bay of Biscay on the previous 28 December by the Phaeton 38, Captain Stopford, and Anson 38, Captain Philip Durham, and which had previously seen service as the Daphne 20 in the British Navy until captured by two French frigates on 23 December 1794 when under the command of Captain William Edward Cracaft.

On 8 July 1798 the Daphne arrived at Sheerness under orders to be fitted out with all dispatch, and she departed the Kentish port on the 29th, serving in the North Sea with a squadron under the orders of Commodore John Lawford. She came into Sheerness on 10 September to have defects made good, went out of dock on the 26th, and after sailing on 5 November she arrived at Portsmouth later that month via the Downs to fit out for the West Indies. Here a telegraph sent her to sea precipitately, and she sailed with the Leeward Islands convoy and a strong escort later that month to arrive at Bridgetown, Barbados on 18 January 1799. Her first task was to report that five of the convoy had been captured by four Spanish frigates.

Towards the end of February 1799 the Daphne began patrolling off Demerara in modern day Guyana, and on 5 March, being wary of the shallow waters in the mouth of the Demerara River, Lindsay anchored some dozen miles out to sea before taking a boat inshore to dine with the governor and the commissary. Despite the dark and squally conditions he declared his intention to return to his ship once the tide was on the ebb, and refuting the entreaties of the governor to remain ashore for the night he set off in his boat with six seamen on high water at about 5 p.m. Throughout the night the Daphne fired signal guns and rockets in vain, for some five hours after setting off from the shore Lindsay’s boat had filled with water, and by noon on the 6th, having several times been washed out of the boat, and having already ordered two seamen to swim for a distant sail, Lindsay and the remaining men each took an oar and attempted to swim for the shore. When last seen, Lindsay was swimming strongly, but he evidently drowned some time later that day. The two original swimmers and one of Lindsay’s remaining companions did reach the shore although one expired shortly afterwards, and Lindsay’s body was itself later washed ashore. The Daphne’s first lieutenant, Philip Browne, assumed temporary command of the sloop.

Lindsay was childless, and as two other brothers had already predeceased his father the family baronetcy became extinct upon his death. The family estate of Evelick passed to his sister Charlotte-Amelia, the wife of the politician and confidante of William Pitt, Thomas Steele.