1779-1844. He was born on 18 April 1779, the second of six sons and a younger daughter of Frederick, the 2nd Lord Boston, and of his wife, Christian Metheun. He was the elder brother of Captain Hon. Charles Leonard Irby, who was posted captain in July 1827.

Irby was educated at Eton and joined the navy in January 1791 aboard the Deptford-based yacht Catherine, Captain Sir George Young, moving to the frigate Winchelsea 32, Captain Richard Fisher, in February 1792, serving on the Newfoundland station and in the West Indies.

In May 1793 he moved to the Hannibal 74, Captain Sir John Colpoys, in which he returned to England from the Leeward Islands, sustaining an injury to his back on the voyage which left him partially disabled for the rest of his life. After serving off Cadiz the Hannibal was paid off in the following year and Irby moved to the Montagu 74, Captain John Montagu, in which he was present at the Battle of the Glorious First of June in 1794, during which engagement his commander lost his life.

The Montagu under Captain William Fooks went out to the Leeward Islands in the autumn of 1794 and returned home to be paid off in November 1795. Irby saw further duty aboard the London 98, Captain Edward Griffith, the flagship in the Channel Fleet of Vice-Admiral Sir John Colpoys, and he was commissioned lieutenant of the Circe 28, Captain Peter Halkett, on 6 January 1797, in which he fought at the Battle of Camperdown on 11 October. Irby followed Halkett to the frigate Apollo 38 in 1798 and was aboard her when she was wrecked off the Tagus on 7 January 1799. He completed his service as a lieutenant aboard the frigate Glenmore 36, Captain George Duff, employed in European waters. 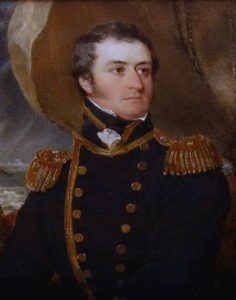 Irby was elevated to the rank of commander on 22 April 1800, and he was employed on the bomb Volcano under the orders of Vice-Admiral Archibald Dickson in that officer s mission to the Baltic during August-September. He next commanded the brig Jalouse 18 from January 1801, going out on a cruise from Sheerness that month, serving in the North Sea, and rescuing the grounded Narcissus 32, Captain Percy Fraser, on which frigate his younger brother was serving.

Irby was amongst many officers posted captain at the peace, his seniority dating from 14 April 1802, and he was presented to the King by his father in the following month. With his promotion there came a frustrating period of unemployment, although from 1805 he did command the Essex Sea Fencibles, reporting to Captain Sir Charles Hamilton.

He was eventually appointed to the recommissioned Amelia 38 at Yarmouth for service in home waters in December 1807. For a short while he was the flag-captain to Vice-Admiral Thomas Macnamara Russell at Yarmouth, having been unable to take his command to sea as she only had half of her usual complement of men aboard. When the frigate was eventually manned he took her out to Newfoundland, Halifax and Quebec with a convoy in May 1808 before arriving back in home waters during the early autumn. In October the Amelia escorted Lieutenant-General Sir David Baird s force out to Spain prior to returning to Portsmouth on 30 November with the captain of the Channel Fleet, Captain Sir Harry Burrard, who was carrying despatches for the Admiralty. Days later the Amelia sailed out on a cruise.

On 22 February 1809 Irby fell in with a French squadron of eight sail of the line that had broken the blockade of Brest, and after warning the British ships in Quiberon Bay that it was at sea he preceded the enemy to the south to link up with Commodore John Beresford s squadron. Two days later he joined Rear-Admiral Hon. Robert Stopford s squadron in the destruction of three French frigates at Les Sables d Olonne, with the Amelia taking the fight to the French whilst her consorts were still some distance behind. He then joined Admiral Lord Gambier s fleet which was blockading the Brest ships of the line in the Basque Roads, and here he drove the French engineers from the Boyart shoal and destroyed the batteries they had been attempting to build in protection of their ships, prior to the Battle of the Basque Roads on 11 April.

Remaining off the coast of France, Irby rescued the crew of the Alcmene 32, Captain William Henry Brown Tremlett, when that frigate was wrecked off the Loire on 29 April 1809, and then sailing for the Iberian Peninsula he assisted the Spanish patriots in disrupting the French supply line to their army in Spain. He also enjoyed several captures, including the Mouche 16 off Santander on 10 June, being at that time in company with the Statira 38, Charles Worsley Boys, followed rapidly by the Rejouie 14, L g re 2, the Notre Dame, and the privateer corvette Charles 20 of Bordeaux after a thirteen hour chase on 8 November 1810, Irby being instrumental in the repatriation of her captain to France on parole on account of that gentleman s previous humanity to British seamen he had captured.

At the beginning of 1811 the Amelia escorted a convoy and several transports home from Lisbon whilst also giving passage to three generals, and shortly afterwards Irby rejected an appointment to the newly built Crescent 38 in favour of remaining with the Amelia. He next took up station off Cherbourg and assisted the Berwick 74, Captain James Macnamara, and the Niobe 36, Captain John Wentworth Loring, in driving ashore the frigate Amazone 40, Captain Bernard-Louis Rousseau, near Barfleur on 24 March where she was set on fire and destroyed by her crew. The Amelia then conveyed the trade home from Quebec, arriving off Portsmouth at the end of July and going round to the Downs.

In October 1811 Irby was despatched in the Amelia as senior officer to the coast of West Africa to act in prevention of the slave trade, a subject that was close to his heart. Within no time he sent two vessels under Spanish colours into Plymouth on the suspicion that they were acting on behalf of British slavers, although the evidence for detaining them proved to be insufficient and they were released. He nevertheless went on to detain a number of other ships engaged in the trade, including nine that were sailing under Portuguese colours. Whilst on this station he burned and destroyed the town of Winnebah after the governor of the local fort, Henry Meredith, had been kidnapped, tortured, and murdered over a dispute about the whereabouts of a box of gold dust.

Having learned of the arrival of two French frigates on the African coast just days before his planned departure for England, Irby decided to keep a close watch upon them, but on 6 February 1813 he was followed to sea by one of the frigates, the Ar thuse 40. A furious and even-sided four-hour engagement ensued which resulted in the appalling casualty figures on the Amelia of fifty-one men killed, including all the lieutenants, and ninety wounded, including Irby himself. Once the two frigates parted, Irby was understandably anxious not to seek a re-engagement in case the Frenchman s consort, the Rubis 40, came upon the scene, although he was not to know that this frigate was already ashore under repair. He therefore returned to England where the Amelia was paid off in May. Ironically, given the huge number of casualties in the action with the Ar thuse, it was notable that during the Amelia s stay on the African coast she had lost only four men to the hostile climate.

Irby did not see any further service as his health had been reduced by his service off Africa and his wounds in the action with the Ar thuse. His debilitation nevertheless did not deter him in December 1815 from tackling two footpads who held up his carriage near Colnbrook in Berkshire whilst he was travelling to visit his brother, Lord Boston. In the ensuing struggle he managed to grab one assailant s pistol but was pistol-whipped by the other and robbed of his gold watch and purse.

He was married twice, the first occasion being on 1 December 1803 at Catton, Norfolk, to Emily Ives Drake, the sister of his brother s wife, Lady Boston, and the daughter to the late William Drake, M.P. for Amersham. She bore him a son but died in child-bed on 7 August 1807. He was married secondly on 23 January 1816 at Basford, Nottinghamshire, to Frances Wright of Mapperley Hall, Nottinghamshire, with whom he had a further three sons and four daughters. One of his sons was the renowned ornithologist, Leonard Howard Lloyd Irby, whilst a daughter, Adeline Paulina Irby, remains to this day a revered figure in Serbia and Bosnia as a result of her efforts in advancing girl s education and her work with refugees in those countries. She was also a close friend of Florence Nightingale. One of his sons, Charles Paul Irby, predeceased him aged 18 in 1836 following a shooting accident at Syracuse whilst serving on Vice-Admiral Sir Josias Rowley s Mediterranean flagship Caledonia 120.

A leading evangelical abolitionist, Zachary Macauley, described Irby as a man of our own choice when he was sent out to Africa in 1811 to combat the slave trade.