Of his origins nothing is known, other than that he resided during the early 1780 s at Holgate, York.

Dawson was commissioned lieutenant on 9 August 1762, and from 1768 held the command of the schooner Hope 6, taking her out to Boston, returning to England in December 1769, and then sailing once more to North America in the following March where he remained until the vessel was condemned and paid off in January 1776. Whilst he was off the port of Gloucester during June 1775 Dawson s command was fired upon from the shore, and being unable to apprehend the culprits he confiscated over a dozen local vessels.

He commissioned a newly purchased 14-gun brig, also named the Hope, as a lieutenant in December 1775 and was promoted commander on 13 May 1776, capturing the brig Independence on 25 November. During 1777 he commanded the Hope at Halifax, and he served under the orders of Commodore Sir George Collier in preventing a planned invasion of Nova Scotia by American forces at Machias by destroying their accumulated stores and inflicting a great deal of damage on the local American shipping. 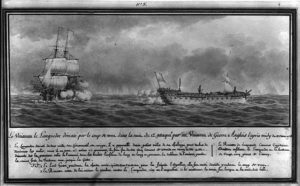 Following the death of Captain Francis Banks on 18 June 1777 Dawson joined the Renown 50 as her acting-captain in his stead, being posted to this rank on 9 September 1777. On 26 July 1778 he arrived at New York from the West Indies whilst still in acting command of the Renown, having passed unnoticed through the rear of the French fleet that was off the port, and he was with Vice-Admiral Lord Howe s fleet when it disputed the Franco/American assault on Rhode Island during August. In the gale that subsequently scattered the fleets he moved in at sunset to attack Admiral d Estaing s damaged flagship Languedoc 90, but then unfortunately withdrew from his dominant position in order to renew combat in the morning, by which time more French vessels had appeared on the scene and his opportunity of glory had been lost.

The Renown captured took the American privateer Friendship on 29 May 1779, but after joining Commodore Sir George Collier’s expedition against the rebels on the coast of Connecticut was dismasted in a gale when escorting a convoy to Quebec. Dawson s first lieutenant, James Athol Wood, was credited with her salvation on this occasion. In 1780, by which year has was in full command of the Renown, Dawson served in the expedition which received the capitulation of Charleston on 11 May.

He exchanged into the Iris 28 with Captain James Hawker in the summer of 1780, and during February 1781 was temporarily the senior officer at New York, in which capacity he wrote to General George Washington regarding the treatment of rebel prisoners. He was subsequently present atthe Battle of Cape Henry on 16 March.

On 8 August off the Delaware Capes the Iris fell in with the undermanned American frigate Trumbull 32, Captain James Nicholson, and when his opponent was damaged aloft in rough weather the following day Dawson was able to bring her to action. The American crew promptly fled below, and although her officers resisted for an hour they were eventually obliged to surrender with casualties of five men killed and eleven wounded, as opposed to one killed and six wounded aboard the Iris.

On 11 September the Iris, being engaged with the Richmond 32, Captain Charles Hudson, in sabotaging buoys laid by the French fleet in the Chesapeake, was caught unawares by the Comte de Barras squadron and the British captains had no option but to strike their colours. Intriguingly the hulk of the captured Iris was later destroyed during the evacuation of Admiral Lord Hood s fleet from Toulon in December 1793.

In the autumn of 1786 Dawson recommissioned the Phaeton 38, and he took her out to the Mediterranean during December. This was not a happy commission, for on 20 November 1788 he was dismissed the Navy for tyranny, oppression, malversation, suttling and such like , having been tried by a court presided over by Rear-Admiral Joseph Peyton aboard the Edgar 74 at Portsmouth. He had been charged on fifteen counts by the sailing master, John Wilkie, two of which were proved. In turn Dawson successfully brought two charges against Wilkie who was dismissed his ship, whilst the surgeon, David Wardrope, was already under sentence of death for drunkenness and assault against the frigate s lieutenants. In turn, the lieutenants, William Wall and John Lucas, were dismissed their ship for permitting the attack upon them.

In 1796 Dawson sought restoration of his rank from the privy council, but this was apparently not granted and he disappeared into obscurity.

Evidentially a difficult man, it was alleged that once when presiding at a court-martial he advised a prisoner sentenced to hang that he should prepare himself for death without delay, and to thank God it was no worse for him .