Died 1822. He was born in Scotland, the son of Archibald Christie of Stenton, East Lothian and his wife, Anne Gordon, the daughter of the collector of customs at Aberdeen.

Christie was commissioned lieutenant on 17 October 1775 and he was given command of the schooner Egmont 10 which he retained until she was wrecked in Trepassey Bay, Newfoundland, in the following July. 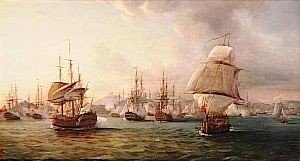 He fought at the Battle of Porto Praya on 16 April 1781 as the third lieutenant of the Romney 50, Captain Roddam Home, which vessel flew the broad pennant of Commodore George Johnstone, and he was promoted commander on 27 April 1781 before being raised to post rank on 24 September. Being immediately posted to the Hannibal 50 in succession to Captain William Grant, he captured the French vessel Neckar 28 and another prize from the a convoy off the Cape on 26 October, escorting both to St. Helena.

Having then been despatched to the East Indian station by Johnstone, the Hannibal was captured off Sumatra by the H ros 74 and Art sien 64 from the Comte d Orves squadron after a three-day chase in light and contrary winds on 21 January 1782. At Christie s court martial presided over by Admiral John Montagu at Portsmouth on 4 December 1784 he was acquitted of any blame for her loss.

He recommissioned the Roebuck 44 as a troopship in September 1793 and served in operations against Guadeloupe and St. Lucia during the 1794 Leeward Islands campaign. In December of that year he was appointed to the Grampus 44 as her first commander, serving in the North Sea until the following autumn when he resigned his commission rather than return with her to the West Indies.

Christie became a superannuated admiral in 1801, it having been represented by the first lord of the Admiralty, Earl Spencer, to the King that his resignation from the Grampus had left him undeserving of flag rank.

He died on 12 August 1822 at Bath and was buried at St. Swithins Church, Walcot.

Christie married Elizabeth Braithwaite, the daughter of Admiral Richard Braithwaite. She died in 1820 having had issue four sons and four daughters.

In 1789 he inherited the estate of Failzie and Baberton near Edinburgh from his uncle, John Christie, becoming the laird in the process. His address in his will was given as Walcot, Somerset.