1754-1828. He was the elder of two sons of Thomas Davy and his wife Mary Spry, the sister of Rear-Admiral Sir Richard Spry.

Davy was commissioned lieutenant on 16 May 1769, promoted commander on 29 July 1772, and appointed to the sloop Diligence 12 which went out to the Jamaican station in October, remaining there for the next five years. 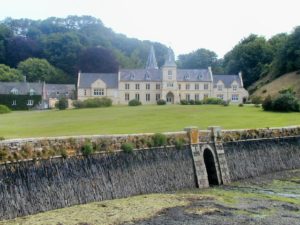 He was posted captain on 5 May 1778, and during September commanded the Europe 64 under the orders of Commodore John Evans in the expedition to capture the French islands of Miquelon and St. Pierre off Newfoundland. He then exchanged with Captain Richard King of the Pallas 36 and returned to England in November.

On 13 April 1779 a royal licence allowed Davy to assume the name of Spry as inheritor to his uncle, Rear-Admiral Sir Richard Spry of Place House, St. Anthony in Roseland, Cornwall, that officer having died on 1 December 1775.

Spry was present under the orders of Captain Sir James Wallace in the attack on a French force in Cancale Bay on 13 May 1779, and having sailed for Jamaica in June he captured the Spanish vessel Diana 22 on 11 November, after which the Pallas was ordered home. He later commanded the Ulysses 44 on the Jamaican station in the latter part of 1782, returning home at the end of the war having made a number of captures including two Spanish men of war.

Spry was not employed thereafter but retired to Place House in Cornwall where he served as a county magistrate. In due course he was promoted rear-admiral on 1 June 1795, vice-admiral on 14 February 1799, admiral on 9 November 1805. He died at Tregoles near Truro in Cornwall on 27 November 1828 and was buried in St. Anthony in Roseland Church.

On 9 February 1796 he married the heiress Anna Maria Thomas of Tregolls, Cornwall. His elder son, Samuel Thomas Spry, sat in the House of Commons as M.P. for Bodmin in the Whig and then Tory interest, and he had issue another son and two daughters.