1775-1848. He was born in London during March 1775, the son of the physician to the King, Richard Warren, and his wife, Elizabeth Shaw. His brother, Pelham Warren, and his maternal grandfather were renowned physicians, and he was the nephew of John Warren, the Bishop of Bangor.

After entering Westminster School on 15 January 1783, Warren joined the Navy in March 1789 aboard the Adamant 50, Captain David Knox, the flagship of Rear-Admiral Sir Richard Hughes at Halifax, remaining with her until she was paid off in 1792. He soon joined the Lion 64, Captain Erasmus Gower, going out to China with Lord Macartney s embassy. 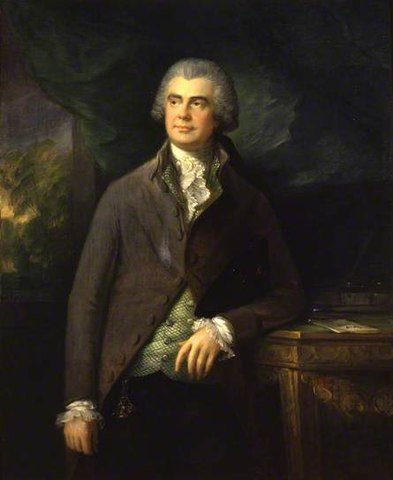 Warren was the son of the esteemed physician, Richard Warren, who treated George, the Prince of Wales, and later King George III himself during his first episode of ‘madness’.

Shortly after his return to England in September 1794 he received a lieutenant s commission on 24 October, being appointed to the Prince George 98, Captain James Gambier, which at that time was fitting out at Chatham. In January 1795 he was appointed to the Jason 38, Captain Charles Stirling, serving in the Channel, and in the spring of 1797 became the senior lieutenant of the Latona 38, Captain John Bligh, the flagship of Vice-Admiral Hon. William Waldegrave, although prior to sailing for Newfoundland this frigate was present at the Spithead mutiny.

On 10 August 1797 Warren was promoted to the command of the sloop Shark 16 in which he was employed in commerce protection to the south of the Newfoundland Banks before returning to Plymouth in November 1798 and being paid off. From February 1800 he commanded the Fairy 18 on the French coast and at Jersey from where that vessel returned at the beginning of November having loss three of her anchors. At the end of that month she sailed for Falmouth to collect the West Indies convoy, and remaining in the Leeward Islands she cruised between Martinique and Surinam before departing for home in February 1801 to arrive at Portsmouth on 25 May.

Warren was posted captain with seniority from 12 May 1801, and he commanded the frigate Amphitrite 28 as a guardship off the Needles for a few weeks from September, whereupon she was taken into Portsmouth harbour to be paid off on 16 October and he went ashore to recover his health.

On the resumption of hostilities the only employment he could gain was the command of the Dundee Sea Fencibles, which he held from October 1803. In November 1806 he was appointed to the Daedalus 32, and he left Cork in the following March to arrive at Port Royal, Jamaica with a convoy on 12 May. Remaining on that station, he joined the two year-old Meleager 36 on 22 April 1808, but this vessel was wrecked off Bare-bush Cay, Port Royal on 30 July having put to sea earlier that afternoon to rendezvous with a homeward-bound convoy. Three men were lost in the wreck, although a great amount of specie was saved, and Warren himself was fortunate to survive after being washed off a raft that was carrying the last of the crew ashore, his preservation being due to his coxswain and Lieutenant George Tupman who dived into the water to haul him back aboard the raft. At the subsequent court martial into the Meleager s loss Warren was acquitted of any blame, and indeed complimented on the efforts he had made to prevent the loss of his command.

From April 1809 he commanded the Melpomene 38 in the Baltic for a few months as a temporary replacement for Captain Sir Peter Parker who was indisposed with yellow fever. On 29-30 May he fought off a Danish flotilla of twenty gunboats in the Belt, having been becalmed by a lack of a wind, his command eventually suffering five men killed and twenty-nine wounded before he could effect an escape. Reportedly the destruction and bloodshed aboard his command was so great that he wept, but nevertheless he had managed to afford protection to a convoy of one hundred sail, which at that time was no more than six miles away, and he returned to the Nore with his charges in early September.

After spending three months on half pay Warren joined the Argo 44 on 11 December 1809, going out to St. Helena to bring home the East India trade in January 1810, although in the event he was not required to assist in the escort of the first convoy that arrived and then had to wait for the China fleet. In the last week of August he departed Spithead for Halifax with a convoy, but after returning home he was brought to a court-martial on 29 October on a charge of failing to sail up to Quebec from Halifax to bring home a convoy. Expert opinion provided by Vice-Admiral Sir Isaac Coffin and other senior officers verified that it would have been too great a risk to enter the St. Lawrence so late in the year and accordingly he was acquitted.

In January 1811 the Argo sailed up to Leith to bring the officers and crews of the wrecked frigates Nymphe 36, Captain Edward Sneyd Clay, and Pallas 32, Captain George Paris Monke, back to Portsmouth to face a court martial following their loss in the Firth of Forth on the previous 18 December. She then went out to Portugal and returned to Portsmouth with a convoy in April, Warren having been obliged to set one of his charges on fire after she had sprung a leak. In May the Argo began fitting out to convey the British ambassador to Constantinople, but the diplomat had still not embarked before in early September she sailed for the Mediterranean to deliver home the Algerian ambassador. The Argo arrived back at Portsmouth in early December with a convoy from Malta, and after going out on a cruise in February 1812 she finally sailed for Constantinople in April with the British ambassador, arriving in the Dardanelles on 12 June. Upon returning to Portsmouth towards the end of September Warren left the vessel.

After eighteen months unemployment Warren was appointed to the Clarence 74 in the Channel on 9 March 1814, remaining with her until 20 August when she was paid off at Portsmouth upon arriving from Cork.

On 23 December 1825 he commissioned the Spartiate 76 at Portsmouth, which sailed in December 1826 to briefly serve off Lisbon as the flagship of Vice-Admiral Lord Amelius Beauclerk in the Tagus. In July 1827 she was one of three sail of the line reportedly ordered to the Dardanelles to observe the Russian movement against Turkey, on 30 May 1828 she returned to Portsmouth to be re-fitted, and she then went out again to the Mediterranean in October from where she returned in April 1830.

Warren was promoted rear-admiral on 22 July 1830, and in the autumn of 1831 raised his flag at Chatham aboard the Isis 60, Captain James Polkinghorne, as the commander-in-chief designate at the Cape. Before he could sail he was ordered to take command of a squadron destined for the Baltic, and he raised his flag aboard the Talavera 74, Captain Thomas Brown, in the Downs. By the end of December he was re-hoisting his flag on the Isis and sailing for the Cape where he remained until returning to Portsmouth at the end of November 1834.

From April 1837 Warren was the admiral-superintendent at Plymouth with his flag aboard the San Josef 110, Captains John Hancock, Joseph Tayler, and Frederick Burgoyne, and on 7 November 1840 his leadership prevented a fire from consuming the entire dockyard after it had destroyed the Talavera 74, the Imogene 26, and several vessels under construction on the slipways. Whilst at Plymouth he refused a position on the board of Admiralty as he considered himself too old. On 23 November 1841 he was promoted vice-admiral and shortly afterwards he retired from his position at Plymouth.

Admiral Warren died at Cosham near Portsmouth on 22 March 1848.

In 1804 he married Mary, the daughter of Rear-Admiral David Laird of Dundee, and had issue two sons and a daughter, his eldest son, Richard Laird Warren, becoming an admiral in due course.

Warren was described as just, kind and liberal , and was regarded in his old age as a sound judge of naval matters.