Please note that the modern reader will undoubtedly find the opinions and beliefs of this officer with regard to the slave trade disagreeable, but in the interests of history I have attempted to report them accurately and authentically.

Died 1798. He originated from Chester.

Matthews was commissioned lieutenant on 1 March 1783, but being unable to find a position in the Navy was instead employed between 1785-7 as an agent for a London slave merchant on the coast of Africa near Sierra Leone. Here he travelled extensively and took the opportunity to study and write about the fundamentals of the slave trade, and in the compliance of the coastal kingdoms in selling slaves to the Europeans. He published his findings in a work dated 1788, and such was its critical reception that an edition was later published in France. On 3 June 1788 he provided evidence to the House of Commons in favour of the trade, adding that the slaves were well cared for on the voyage across the Atlantic to the Caribbean, and that attention was paid to their cleanliness. 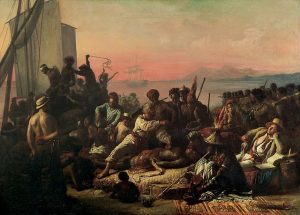 Captain Matthews was a strong advocate for the continuance of the slave trade.

Rejoining the Navy, in May 1789 he was appointed fourth lieutenant of the Barfleur 90, Captain Robert Calder, flying the flag of Vice-Admiral Robert Roddam at Portsmouth.

Matthews was promoted commander on 30 April 1793 and appointed to Vulcan in succession to Captain Lord Garlies on 3 May, which vessel had been fitted out as a fireship at Portsmouth in January, but on 10 March had suffered a tragedy whilst at Spithead when the jolly boat, under tow of a longboat, had been swamped with the death of the sailing master and a seaman. At the end of April the Vulcan went out of the harbour, and in May she sailed for the Mediterranean with Vice-Admiral Lord Hood’s fleet to serve at the occupation of Toulon from August. Here Matthews assumed the temporary command of the Courageux 74 on 30 August for Captain Hon. William Waldegrave who was to return home with despatches, and he was posted captain on 13 September.

The Courageux subsequently joined Commodore Robert Linzee’s squadron which was driven away from Forneilli in the Gulf of San Fiorenzo, Corsica on 1 October, during which action her first lieutenant was killed, although newspaper reports at home to the effect that she had sunk as a result of damage incurred in the failed attack were soon rescinded. Returning to the fleet, Matthews was replaced in the acting command of the Courageux by Captain Benjamin Hallowell, whereupon he assisted Captain Hon. George Keith Elphinstone in the evacuation of Toulon during December.

In January 1796 he commissioned the new frigate Maidstone 32 at Chatham, sailing from the Nore to Leith in April with a Russian squadron that it was intended would convoy the trade to the Baltic. During September he arrived at Elsinore with a dozen ships in convoy from the Nore. 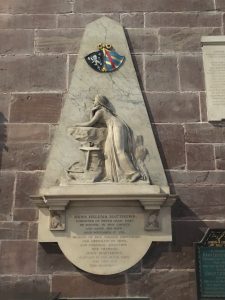 The memorial to his wife erected by Matthews in Chester Cathedral. Thank you to Robert Scott for providing the image.

Going out from the Downs in January 1797, the Maidstone had the good fortune to capture two richly laden Spanish ships bound for Cadiz, these being the San Philippe et San Jago from the River Plate, and the San Jose y Animas las Feliz from Havana. The reported value of both ships combined was £40,000, equivalent to about £4.5m in today’s money, although this value was probably an over-estimation. The Maidstone then proceeded to Sierra Leone where she arrived on 17 February, and then sailed across to Barbados with a convoy, completing what was described as a tedious passage in fifty-three days, and capturing the privateer Flibustier 12 two days before her arrival. Matthews’ duties in the Leeward Islands included monitoring slave trading vessels of all nationalities, but his was not a happy command, and he appears to have had trouble controlling the alcoholic excesses of his officers.

At the end of 1797 the Maidstone was despatched to Jamaica, and Matthews died in March 1798 of yellow fever whilst on passage home with a convoy from that island.

On 2 January 1792 at St. Oswald’s Church, Chester, he married Anna Helena Legh of Booths, Cheshire. His wife sadly died in the following year, and he erected a monument in Chester Cathedral to her memory. Matthews died leaving an estate of £2,250.

He was described as a ‘first rate seaman’, possessing ‘great ingenuity and merit’. A keen student and recorder of his experiences in the Navy and the slave trade, Matthews was the author of several works including ‘The Maritime Campaign of 1778: A Collection of All the Papers Relative to the Operations of the English and French Fleets’, ‘Twenty-one Plans: with Explanations of Different Actions in the West Indies during the Late War’ and ‘A Voyage to the River Sierra-Leone, on the Coast of Africa; Containing an Account of the Trade and Productions of the Country, and of the Civil and Religious Customs and Manners of the People; in a Series of letters to a Friend in England.’

Matthews was opposed to the abolition of the slave trade, emphasising that domestic slavery was rife in Africa, that enslavement prevented over-population, and that it was ‘probably’ permitted by God as an alternative to judicial execution or death as a prisoner of war. He also claimed that the greater number of any prisoners refused by the Europeans as slaves were put to death by their African captors, and that the main driver for the trade was not that of the European needs.