1766-1828. He was born on 28 February 1766 in Kent, the son of a Richard Boulden or Boulding by his wife Sarah Rigden, His maternal aunt was married to Commodore Edward Thompson, who adopted Thomas following the early death of his father, and whose name Thomas took. Historically there has been some conjecture that Thomas was in fact Commodore Thompson’s son by another woman, and one or two contemporary obituaries stated categorically that he was Commodore Thompson’s son, a confusion that may have arisen through Thomas regarding Commodore Thompson as his father. One story that can probably be discounted is that the birth family were so poor that Thomas was exchanged for a pig!

In June 1778 Thompson joined the Hyaena 28, commanded by his uncle, going out to the West Indies in March 1779 before returning home with a convoy in September. Three months later the Hyaena was present at the Moonlight Battle off Cape St. Vincent on 16 January 1780 and the subsequent relief of Gibraltar by Admiral Sir George Rodney. After returning to England with the admiral’s dispatches she then went out in August to New York with a convoy, from where she sailed to Charlestown, and then Barbados.

Whilst the Hyaena returned to Falmouth in January 1782 it appears that Thompson remained in the Leeward Islands, for having been commissioned lieutenant on 14 January 1782 he spent some time in command of a small schooner, the Berbice 8, in which it was reported that he captured a superior French privateer. 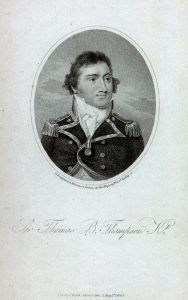 Thompson’s next employment was aboard the Grampus 50 under the command of his uncle, which vessel sailed for the Guinea Coast in the first week of February 1784 before returning to Portsmouth in July for docking and a thorough refit. She then remained at Spithead for the best part of a year whilst awaiting sailing orders before finally returning to the African coast in the autumn of 1785. Following the re-allocation of commands in the squadron after his uncle’s death on 17 January 1786, Thompson replaced Captain George Tripp as the commander of the Nautilus 16. The Admiralty confirmed this position on 27 March once Captain Tripp and the Grampus arrived back at Portsmouth.

In July 1786 Thompson brought the Nautilus into Portsmouth from the Guinea Coast to be fitted out prior to leaving dock for Spithead in the last week of September. In the following April he escorted a human cargo of some seven hundred and fifty ‘blacks’ and seventy prostitutes aboard three transports from Plymouth via Tenerife to Sierra Leone, where it was planned a colony would be established. One of the transports was diverted to the West Indies and lost up to a hundred of her two hundred and fifty ‘blacks’ to the ‘putrid fever’.

In January 1788 the Nautilus arrived at Portsmouth from Africa and the West Indies, and two months later she ran aground in a strong tide in the harbour, which accident required a return to the dock. At the end of May she departed Spithead for Plymouth, prior to sailing for Newfoundland where she spent the season before returning to Portsmouth on 11 November to be paid off early in the following month. Thompson then spent the next couple of years on half-pay in Hertfordshire.

Following the Spanish Armament in 1790 he was one of many officers posted captain on 22 November, being posted to the Veteran 64 for purposes of rank only. Thereafter he remained unemployed for the next six years and lived the life of a carefree young gentleman in London.

Appointed in November 1796 to the Leander 50, Thompson took her around to the Nore in January 1797 to be employed in the convoying of the Baltic trade, and she was in the Downs by the 15th of that month. On 7 February she sailed out of Portsmouth with the Jason 38, Captain Charles Stirling, and Phaeton 38, Captain Hon. Robert Stopford, in escort of a convoy for Lisbon with further orders to join the Mediterranean Fleet under Admiral the Earl of St. Vincent off Cadiz.

Upon coming out of Lisbon later in the summer, the Leander was sent to rendezvous with an expeditionary force led by Rear-Admiral Sir Horatio Nelson that had been despatched by St. Vincent to attempt the capture of a Spanish galleon at Santa Cruz, Tenerife. Arriving three days after the initial landings had been aborted on 21 July, Thompson, whose local knowledge had been deemed of value to the expedition, was severely wounded on the morning of the 25th during the final unsuccessful assault that saw Nelson incur the wounds that led to the loss of his arm.

In December 1797 Thompson was entrusted by St. Vincent to negotiate with the Dey of Algiers over that ruler’s demands for money from the British government, during which mission he brought away the British consul and was fortunate to survive a storm that saw his consort, the Hamadryad 36, Captain Thomas Elphinstone, lost in the Bay of Algiers on Christmas Day.

In the summer of 1798 the Leander joined the reinforcements under Captain Thomas Troubridge that were sent into the Mediterranean to support Nelson in his search for the Toulon fleet, which exercise culminated in the Battle of the Nile on 1 August. Prevented at first from joining the battle in his attempt to haul Troubridge’s grounded Culloden 74 off a shoal, Thompson later performed magnificent service by placing his small command in a gap in the French line and raking the two ships on either side of him without suffering their reply, these being the Franklin 80 and the mighty flagship Orient 120. On the next morning one of his boats received the surrender of the grounded Tonnant 80. During the battle the Leander was fortunate to suffer casualties of just fourteen men wounded.

Thompson was subsequently ordered to convey Captain Edward Berry with Nelson’s despatches to St. Vincent off Cadiz, but near Crete on 18 August his undermanned command fell in with the French Généreux 74, which had escaped the British cutches at the Battle of the Nile. In resisting for over six hours the Leander sustained casualties of thirty-five men killed and fifty-seven wounded, Thompson being one of the latter with a ball in his knee, and grazes to his leg and ear from cannonballs. After being plundered, ill-used and then taken to Corfu by their captors, the officers were at least accorded satisfactory treatment on the latter island, and Berry and Thompson were allowed to travel overland to England, eventually arriving at the Admiralty on 20 November, by which time Thompson was reportedly walking with a limp. Unsurprisingly he was complimented for his gallant defence of the Leander at his court-martial under the presidency of his old friend, Captain George Tripp, aboard the America 64 at Sheerness on 17 December 1798, and he was further honoured by being knighted on 13 February 1799 and awarded a pension of two hundred guineas a year in respect of his wounds.

Having been exchanged with Captain Joseph-Louis Audouard, late of the Immortalité 40, who had been living on parole at Tiverton, Thompson was appointed to the forty year-old Bellona 74 in February 1799, and he set off for Plymouth with his bride immediately after their wedding on the 25th to fit out his new command. In May he sailed with Rear-Admiral James Hawkins Whitshed’s squadron to Gibraltar, forming the advanced part of reinforcements to the Mediterranean Fleet during the cruise of the Brest fleet which had commenced on 25 April, and he was present at the capture of Rear-Admiral Jean-Baptiste-Emmanuel Perrée’s squadron of three frigates and two brigs by Captain John Markham’s advanced squadron on 19 June. 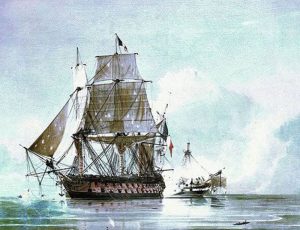 The Leander succumbs to the Genereux in 1798

In August 1799 the Bellona entered Plymouth from Torbay, and thereafter she served with the bulk of the Channel fleet for the best part of the next eighteen months, occasionally putting into Portsmouth or Plymouth, although from the end of October 1800 she remained in Torbay for some weeks with the flag of Admiral Earl of St. Vincent whilst the fleet put to sea under Vice-Admiral Sir Henry Harvey.

At the end of December 1800 the Bellona came into Portsmouth, and several weeks later she was taken into dock. Coming out again in the early days of February, she ran down to Spithead at the end of the month, but rather than rejoin the Channel Fleet she arrived in the Downs on 4 March 1801 to join the mission to the Baltic under Admiral Hyde Parker and Vice-Admiral Lord Nelson. At the Battle of Copenhagen on 2 April the Bellona went aground in range of the enemy cannon during the early stages of the battle, and she suffered casualties of eleven men killed and seventy-one wounded, including the habitually unlucky Thompson who had his left leg shot away. He was transferred in great pain under the supervision of his old colleague Captain Thomas Fremantle to the Isis 50, Captain James Walker, and he eventually arrived at Yarmouth on 25 April in a great depression. Here he convalesced for some time under the care of his wife, although by 3 June he was able to attend the Admiralty in London. Concurrently his pension was raised to five hundred guineas per annum.

Offered the command of the recently launched Dreadnought 98 or a yacht, Thompson chose the latter option, and he recommissioned the ancient yacht Mary in July 1801, retaining her for the next five years. During this unhappy period out of active service he lived on a farm near Bushey Park, taking a keen interest in agriculture, and although there were rumours that he would be called to the Admiralty in March 1803 to assume a command on the resumption of war his wounds prevented him from returning to the flag

In June 1806 he was appointed the comptroller of the navy in succession to the stricken Captain Henry Nicholls, and he was created a baronet on 11 December. From 1807-16 he was the M.P. for Rochester in the Tory interest, notwithstanding a vote of censure being held against him in 1810 over the administration’s imprisonment of Sir Francis Burdett. He was promoted rear-admiral on 25 October 1809 and vice-admiral on 4 June 1814, was nominated a K.C.B. on 2 January 1815, and in the same year his pension was increased to seven hundred guineas. In February 1816 he left his position as comptroller to become the Treasurer of Greenwich Hospital in succession to Admiral Sir John Colpoys, and on 14 September 1822 he was nominated a G.C.B.

Sir Thomas Thompson died at his seat of Hartsbourne Manor Place near Bushey Heath in Hertfordshire on 3 March 1828.

Thompson married Anne Raikes of Gloucester at St. Mary de Crypt, Southgate Street, Gloucester, on 25 February 1799, having earlier met her at Gibraltar where her uncle had served in the garrison. Among his issue of three sons, two of whom died in infancy, and two daughters, his surviving son, Sir Thomas Raikes Trigge Thompson, born on 1 April 1804, entered the Navy in 1818 and rose to the rank of vice-admiral.

He was above average height, graceful and athletic, although following the loss of his leg the lack of opportunity for exercise, apart from on horseback, resulted in a weight-gain. A vigorous and industrious officer, he was well respected by the Earl of St Vincent. Thompson was a significant beneficiary of Admiral Sir George Young’s will in 1810.

My thanks to David Boulding for providing a great deal of Thompson’s personal detail for this biography.