1764-1805. He was born on 4 November 1764 in Park Street, Grosvenor Square, Westminster, the eldest son of William Henry Ricketts of the Canaan Estate, Jamaica,. His mother was Mary Jervis, the sister of the future Admiral the Earl of St. Vincent, and as the latter proved childless Ricketts became the heir to the viscountcy of St. Vincent, although he died before he could accede to the title and instead his brother Edward became the 2nd Viscount St. Vincent. His sister Mary married Admiral William Carnegie, the 7th Earl of Northesk

Following an education at Odiham Grammar School in Hampshire and at Winchester College, Ricketts entered the service in 1781 aboard the Foudroyant 80 commanded by his uncle, and he was present on 20 April 1782 when this vessel captured the Pégase 74 after a long chase off Brest. His uncle’s significant patronage secured his lieutenant’s commission on 5 September 1782, and he joined the Success 32, Captain Charles Morice Pole, which had taken a convoy out to Jamaica. Here, at the tender age of eighteen, and after a mere two years’ service, Ricketts was promoted commander on 17 March 1783. It has been stated that he was appointed to the Shrewsbury 74, but this appears to have been for purposes of rank only as that sail-of-the-line was deemed unfit for service and was scuttled at Jamaica in early June.

Ricketts’ next service was not until March 1787 when he recomissioned the sloop Bonetta 14, sailing for the Leeward Islands in July where he remained for three years. On 22 November 1790 he was posted captain of the Hermione 32, apparently for purposes of rank only, and thereafter it does not appear that he was employed for a further five years. 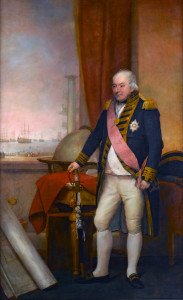 Jervis was the nephew and heir of the Earl of St. Vincent, but died before his uncle.

In early 1796 he was appointed to the Magicienne 32, joining her at Spithead on 22 March and seeing duty off La Havre under the orders of Captain Sir William Sidney Smith, prior to returning to Portsmouth towards the end of May to refit. Ordered to take a convoy out to Gibraltar and then to proceed to the West Indies, he arrived at Cap Saint-Nicolas Mole on 9 September. Serving on the Jamaican station, he became a favourite of Vice-Admiral Sir Hyde Parker, being despatched on a number of cruises that enriched both him and his commander-in-chief. Amongst many other prizes, he captured the French corvette Cerf Volant 18 off San Domingo on 1 November, and he took four more significant prizes in the ensuing month, including a sloop on 3 December. John Maples was his first lieutenant at this time, and he was an officer who proved particularly adept in successful boat actions.

On 6 April 1797, being in company with the Regulus 44, Captain William Carthew, the Magicienne despatched their boats to attack a privateer nest at Cape Roxo, San Domingo where thirteen vessels were either captured or destroyed. Whilst returning to Jamaica the Magicienne prevented a French expedition from capturing Les Irois near Cape Tiburon, taking another five vessels including a six-gun privateer sloop in Carcasse Bay on 23 May, although four men were lost in this episode. Another boat attack followed on two privateers at Port de Paix in northern Haiti on 28 September, but this was unsuccessful.

In October 1797 Ricketts was sent to patrol the Mona Passage in company with the Severn 44 Captain Thomas Watkins, having with him four mutinous men from the recently arrived storeship Grampus, Lieutenant Charles Carne, with orders to beach them near a Spanish settlement! Once Admiral Parker learned of the arrival at La Guaira of the Hermione 32, whose crew had butchered their officers and handed the ship over to the Spanish, he selected Ricketts to try and negotiate the repatriation of the mutinous crew, but in this the captain of the Magicienne was no more successful than other British officers sent on the same mission.

In late December 1797 the Magicienne made further captures in Guadilla Bay, Puerto Rico including the privateer Brutus 9 on the 27th when in company with the Regulus 44, Captain William Carthew, and sloop Diligence 16, Captain Robert Mends. In early 1798 Ricketts was sent with the brig Drake 14, Commander John Perkins, and two hundred and fifty troops to tackle a nest of pirates who had established themselves in Platform Bay, near Cape Nicola Mole, San Domingo. He subsequently left the Magicienne in May to return to England to attend to what were termed ‘private affairs’ but which no doubt related to the intended divorce from his wife because of her adultery.

On 11 November 1800, after two years unemployment, Ricketts assumed command of the Naiad 38, taking her out to cruise in the Bay of Biscay from Plymouth and recapturing the Post Office packet Phoenix some five miles off Cape Finisterre in May 1801. Her boats and those of the Phaeton 38, Captain James Nicoll Morris, later cut out the armed Spanish packets Alcudia and Raposa from some ten miles down the River Pontevedra on 16 May. The Naiad returned to Plymouth on 25 May where she was quarantined, and whereupon he left her.

On 10 June 1801 Ricketts assumed his mother’s maiden name, Jervis, on a royal licence so that he could become the heir to his uncle’s titlle. In the same month he was appointed to the Robust 74, which he initially commanded in the Channel, but which in February 1802 was part of a squadron sent out at short notice from Torbay for the West Indies. In July he brought her back from Jamaica to Portsmouth where she was paid off.

In May 1803 Jervis was appointed to the Magnificent 74, and whilst he was waiting for her to be manned he was given the unique task of going aboard the French corvette Epervier 18 at Portsmouth, which had been captured in July by the Egyptienne 40, Captain Hon. Charles Elphinstone Fleeming, to establish whether her previous commander, Jerome Buonaparte, was still aboard her, as a great deal of the latter’s possessions had been found on that vessel. Jervis had previously met the emperor’s brother and he was able to confirm that Jerome was not hiding amongst the crew.

The Magnificent was still at St. Helens in September, and Ricketts was attendant on the Prince of Wales when the heir to the throne visited Portsmouth. At the end of the month he at last got underway to join Admiral Lord Gardner at Cork. Whilst still on active duty he was appointed the treasurer of Greenwich Hospital later that year in the stead of the late Rear-Admiral John Willett Payne.

Seeing further service in the Channel, on 25 March 1804 the Magnificent struck uncharted sunken rocks near the Black Rocks off Brest, and the majority of her crew were saved by the boats of the fleet before she went down at 10.30, despite an hour’s vigorous pumping. Eighty-six men, including the marine officer and many from a rescuing ship, the Impétueux 80, Captain Thomas Byam Martin, were unfortunately taken prisoner when their boats were blown ashore. After coming home in the Colossus 74, Captain James Nicoll Morris, Jervis and his officers faced a court martial that was held early in the following month aboard the Salvador del Mundo 112 at Plymouth, and they were acquitted of blame for her loss.

In May 1804, barely a month later, Jervis was appointed to replace Captain Sir Edward Pellew aboard the Tonnant 80 in the Channel fleet and off Rochefort. Tragically, he lost his life on 26 January 1805 when the four-oared gig in which he and Captain Patrick Campbell of the Doris 36 had set off to attend Vice-Admiral Sir Charles Cotton aboard his flagship San Josef 112 capsized. Campbell survived by clinging to an oar, but Jervis died despite the valiant efforts of his coxswain who stayed with his captain until he could no longer save him.

On 9 November 1793 Jervis married Elizabeth Jane Lambart, the daughter of the 6th Earl Cavan, by whom he had two daughters, the second of whom, Henrietta Elizabeth Mary, married Captain Edmund Palmer of the Navy. An act of parliament dissolved Jervis’ marriage in 1799 following Elizabeth’s infidelity with a Captain Hargrave of the Lancashire Fencibles, whereupon Jervis was awarded a thousand guineas damages. His wife certainly bore an unfortunate reputation, for in 1792 she had won damages of four thousand guineas against a newspaper which had alleged that she had eloped with a footman. Following his divorce, Jervis had two sons with a French woman, Cecilia Jane Vinet, who was allegedly presented to him along with a horse by a member of King George III’s retinue on the occasion of the King’s visit to Hampshire. The eldest of the sons in time joined the navy to become Vice-Admiral William Henry Jervis.

Following his father’s death in 1798 Jervis and his brother Edward jointly inherited the estate of Mount Ricketts in Jamaica with a deferral of twenty-one years, together with the estate of Canaan on that island. His residence prior to his divorce was Fletchwood, near Lyndhurst in Hampshire.

Jervis was generally known as ‘Henry’. An extremely well-connected gentleman, he was described as ‘generous and urbane’, ‘polished’ and ‘somewhat whimsical’, but was apparently small of stature, slim, and with a beaked nose. He had the reputation of being proficient in his trade and as equally strict and unforgiving as his illustrious uncle, the Earl of St. Vincent, with a propensity for flogging his men into line, particularly if drunkenness was involved. At the same time, and in the same manner as his uncle, he cared for his men in a fatherly manner. He enjoyed breeding racehorses and was considered to be extravagant.

He was a good friend of Robert Waller Otway.

My thanks to Simon Ricketts for his input to this biography