1723-1785. He originated from Roscobie in Fifeshire, being the younger son of James Moutray, the 5th Laird of Roscobie, and of his wife, Emelia Malcolm of Innerteel.

Having been commissioned lieutenant of the Orford 70, Captain Perry Mayne, in the West Indies by Rear-Admiral Sir Chaloner Ogle on 12 May 1744, Moutray had to wait until 16 February 1757 before his next step up in rank, becoming commander of the hospital ship Thetis 44. This vessel served with Admiral Sir Edward Hawke s fleet in the Basque Roads, and then went out to the Mediterranean in December.

After being posted captain by Rear-Admiral Thomas Broderick on 28 February 1758 he nevertheless remained with the Thetis as she had been reclassified as a 32-gun frigate. Sadly, the Admiralty found this promotion to be irregular , and it was not confirmed until 24 January 1763. In the meantime Moutray continued to command the Thetis in the Mediterranean from 1760, assisting the Rainbow 44, Captain Richard Gwynne in the capture of the St. Malo privateer Victoire 24. On 17 July 1761 he received the surrender of the Bouffonne 32 off Cadiz when this ship and the Achille 64 were attacked by a squadron of two sail of the line and a frigate under the command of Captain Charles Proby. He left the Thetis later that year.

After a period of unemployment Moutray commanded the Emerald 32 from 1769-71, and in 1773 he became the 7th Laird of Roscobie on the passing of his elder brother. He later commanded the Thames 32 in the Mediterranean in 1774, undertaking a mission to Morocco before paying her off in July of the following year.

He had the Warwick 50 in home waters from the early summer of 1777, and in the early part of the following year he conveyed the East India trade from St Helena, arriving home in July. He then commissioned the newly built Britannia 100 in August for Captain Charles Morice Pole, this vessel becoming the flagship of Vice-Admiral George Darby. He sat on the court martial of Admiral Hon. Augustus Keppel following the Battle of Ushant on 27 July 1778, and was appointed to the Ramillies 74 in March of the following year, commanding her in the Channel fleet retreat of August 1779. 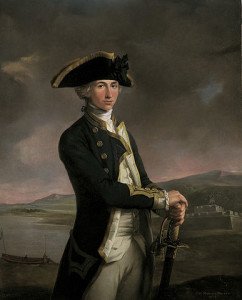 During July 1780 he was detached from the Channel fleet to command the escort of the East and West Indies trade, but upon running into another substantial fleet on 8 August Moutray failed to alter his course. Disastrously he had stumbled upon a Franco/Spanish fleet, and by daylight on 9 August fifty-five ships had been taken. The loss to the insurers was over 1.5m, a number of valuable troops had been captured, and Spain was emboldened to continue a war she had been considering withdrawing from. The Ramillies and the remaining ships made their way to Jamaica where on 13 February 1781 Moutray was tried by court-martial and dismissed his command, being reprehensible in his conduct for the loss of the convoy . Moutray s supporters would claim that the government had failed to provide adequate resources to ensure the safety of the convoy, but his contemporaries clearly had little sympathy for his management of the merchantmen.

Moutray resumed employment shortly before the government fell, being appointed to the Edgar 74 on 2 March 1782 with the broad pennant of Commodore John Elliot. In May he transferred to the Vengeance 74, which took the Dutch privateer Doggerbank 20 off the Scilly Isles on 9 August, and which he commanded at the relief of Gibraltar on 18 October and the action off Cape Spartel, where he lost three men killed and fourteen wounded. He had previously sat on the court martial into the loss of the Royal George on 29 August.

In February 1783 he was appointed resident commissioner of the navy at Antigua, a civil position to which he was conveyed by Captain Cuthbert Collingwood in the Mediator 44. On 29 December 1784 he was ordered to hoist a broad pennant in the absence of any senior officer by Rear-Admiral Sir Richard Hughes, the commander-in-chief in the Leeward Islands, and he did so aboard the Latona 38, Captain Charles Sandys. When he came into harbour, Captain Horatio Nelson of the Boreas 28 refused to recognise Moutray s unofficial appointment and upon being ordered by the young captain to strike his pennant Moutray acquiesced. When the Admiralty got to hear of the incident they declared Hughes action to be illegal and in 1785 recalled Moutray, by which time he was in any case very ill.

Moutray retired to Bath where he died on 22 November 1785, being buried in the Abbey Church.

He married Mary Preble, twenty-eight years his junior and the daughter of a retired naval commander, on 2 September 1771 at Berwick-on-Tweed. She was a most attractive woman, both in looks and character, and they had issue a son and daughter. Mrs Moutray remained on friendly terms with Collingwood for the next twenty years, as she did with Nelson, who not only made a fool of himself yearning for her but also helped shape the career of Moutray s son James until he died of a fever at Calvi in 1794 whilst a lieutenant. Moutray also had two illegitimate children with a woman by the name of Elspeth London.

Moutray suffered ill health in the latter years of his career and was sent out to Antigua despite his entreaties not to serve in a tropical climate.