As the war continued, so the French and Spanish allies began to obtain the upper hand at sea by sheer weight of numbers. British resources were soon stretched to the limit, and no more so than in the conveyance of the country s trade and supplies to the furthermost outposts of the empire.

On 29 July a huge convoy of sixty-three ships bound for the East and West Indies departed Spithead under the escort of the Ramillies 74, Captain John Moutray, and the frigates Southampton 36, Captain William Garnier and Thetis 36, Captain Robert Linzee. The men-of-war were initially supported by the Inflexible 64, Captain John Raynor, Buffalo 60, Captain Rowland Cotton, and Alarm 32, Captain Sir Richard Pearson, but these vessels had instruction to part with the huge convoy once it reached a position one hundred leagues to the west of the Scilly Islands. Included in the convoy were five armed East Indiamen carrying vital military stores and equipment, eighteen victaullers, storeships and transports with provisions, tents, naval stores and the 90th Regiment of Foot bound for both the Leeward Islands and Jamaican stations, and forty merchant vessels that were headed for the West Indies.

Before separating from the Inflexible, Buffalo and Alarm, Moutray s convoy fell in with the Channel fleet on 2 August, and the commander-in-chief, Admiral Francis Geary, took it upon himself to escort it to a position one hundred and twelve leagues west of Ushant. Although Geary was as aware as anyone of the inadvisability of letting such a valuable convoy put to sea with such poor cover, he could not escort it any further without compromising his station in watch over the French fleet at Brest. But if Lord Sandwich and the lords of the Admiralty had taken such a huge risk in providing such inadequate resources for the convoy s escort, the subsequent conduct of Captain Moutray was equally lacking in judgement.

Despite being fully aware of a huge allied presence off Gibraltar, Moutray negligently failed to take into account the possibility of the enemy being on watch off Cape St. Vincent, and he continued on his course for that landmark. Although neither he nor Geary were to know it, the allies had been fully apprised of the convoy s course by intelligence gathered within Britain, and a fleet had departed Cadiz on 7 August to intercept it. This force was under the command of Admiral Don Luis de Cordova with his flag aboard the Sant sima Trinidad 120, and it comprised thirty-one sail of the line including a squadron of seven French vessels under Rear-Admiral Antoine Hilarion de Beausset, in addition to a half-dozen frigates.

At sunset on 8 August, about three hundred miles west of Cape St. Vincent, a number of sails were seen in the distance from the mast-head of the Ramillies, but Moutray failed to make any alteration to his course. At 1 a.m., with the wind being in the north north-east, a host of lights were seen directly ahead, and now he decided that his convoy was in danger. As there did not exist at that time a signal for hauling to the wind and setting sail, precious time was lost as the night signal for the convoy to bring to on to the starboard tack was made. This was followed half an hour later by the signal to set sail and keep close to the wind. In typical fashion many of the merchantmen failed to understand these signals or simply ignored them, and most reverted to their previous course which was taking them towards the enemy. 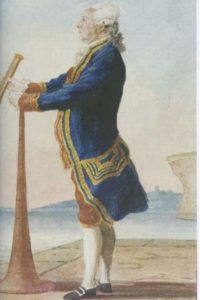 For their part, the allies had not seen the British convoy when their own topsails had been spotted on the evening of the 8th, but the report of signal guns throughout the night alerted them to the presence of another fleet. Discounting the theory that it might be the Channel fleet on the basis that Geary would never have come so far south whilst a French fleet was still harboured in Brest, Cordova steered towards the sound of the signal guns. Consequently the first light at about 4.30 found the errant members of the convoy irretrievably at the mercy of the allies, and although Moutray made the signal for his charges to disperse, the majority of the ships was picked off at leisure by the grateful Spanish and French.

The five armed East Indiamen did not strike without a fight however, and it took the cannon of the mighty Sant sima Trinidad to induce two to strike their colours, whilst another was set on fire by the cannon of the Pur sima Concepci n 70 before the blaze was extinguished and she was taken possession of. A fourth vessel lost two men killed and six wounded after being fired upon and striking to the Ferme 74.

The Ramillies, together with the Southampton and Thetis which had adhered to Moutray s instructions and were thus to windward of the allies, escaped the attention of seven sail of the line and a frigate which had set off in chase of them, as did another eight vessels from the convoy that had been compliant and were to windward. Disastrously the other fifty-five vessels were captured, resulting in a total of two thousand eight hundred and sixty-five people becoming prisoners, which figure included thirteen hundred-odd hundred seamen, twelve hundred-odd soldiers, seventy-five officers, and nearly three hundred passengers.

The financial loss to the British was the largest ever known, with one and a half million pounds being accounted for by the insurers alone, several of whom were immediately forced into bankruptcy. In addition to the forfeiture of so much wealth, troop reinforcements and valuable stores, the capture of the convoy allowed Spain, which had been wavering towards peace, to renew its efforts against Gibraltar with a vastly enhanced morale. Hard on the loss of fourteen vessels of the Quebec convoy to privateers on the Newfoundland Banks earlier that month, the loss of Moutray s convoy was a huge blow to the British war effort. 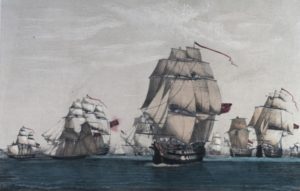 The capture of the convoy

Despatching the Thetis with news of the calamity to England, Moutray rendezvoused at Madeira with the few ships that had escaped the allies and made the best of his way to Jamaica. On the orders of the Admiralty, and at the behest of the merchants in London, he was rapidly court-martialled aboard the Princess Royal 90 at Jamaica. The trial took place on 13 February 1781 under the presidency of Rear-Admiral Joshua Rowley, and the verdict found Moutray guilty of being reprehensible in his conduct for the loss of the convoy , it having been deemed that he had failed to see to the protection of the convoy when it was possible the strange sails seen on the evening of the 8th might have been an enemy fleet. He was dismissed from the Ramillies, and in an unprecedented move the Admiralty demanded that the minutes of the court-martial be returned by fast packet to Britain so that they could be printed for the eyes of the public.

This rapid publication of Moutray s guilt indicated that the Admiralty was keenly aware of the need to produce a scapegoat for their own mistake in despatching such an inadequate escort. In effect, Moutray s lax conduct had allowed them that luxury, although the convoy s captains were probably equally to blame for their failure to adhere to his signals in the early hours of the morning before they were captured.

Moutray was not long unemployed, for in March 1782 he assumed the captaincy of the Edgar 74 with the broad pennant of Commodore John Elliot, and following the war he was appointed the naval commissioner at Antigua. His posting there was brought to an end after a disagreement with the young Captain Horatio Nelson, and being in ill-health he returned to Europe in 1785 before dying at Bath later that year.