1772-1801. Born on 3 June 1772, he was apparently the fourth son of Augustus Henry Fitzroy, the 3rd Duke of Grafton, who served as the prime minister from October 1768 to January1770, however references to his parenthood are surprisingly scant and it is not clear as to whether he was a brother or half-brother of Admiral Lord Fitzroy.

Fitzroy was commissioned lieutenant on 17 March 1790 by Rear-Admiral Sir John Laforey, the commander-in-chief in the Leeward Islands, and he served as a junior lieutenant aboard the flagship Trusty 50, Captain John Drew. He was promoted commander on 15 December 1792 of the Orestes 18, which sloop was both reported to be at Deal that month and in the Leeward Islands at the start of the French Revolutionary War in February 1793. During March, whilst bringing the remains of Lord Camelford home from Leghorn after his death in Italy on 19 January, the Orestes was chased by a French ship at the entrance to the Channel, and at the end of April she forced the crew of an outward-bound East Indiaman, the Marquis of Lansdown, to stand down after they had resisted previous boarding attempts by press gangs operating from gallies. 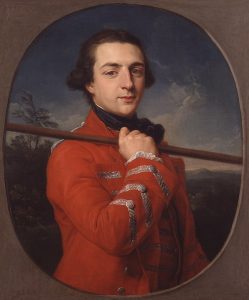 Fitzroy was a son of the former prime minister, the Duke of Grafton, here portrayed.

On 11 May 1793 the Orestes entered Portsmouth after a cruise, in June she sent into Plymouth the Spanish brig Carlos, bound from New Orleans to Bordeaux and laden with French property valued at ten thousand guineas, and whilst in the Bay of Biscay in July she detained the American ship Cato, bound for Bordeaux from Portsmouth, New Hampshire, with naval and military stores. On 10 November she ran for Portsmouth having lost her fore-topmast and main-topgallant mast in a storm, and on 7 December she entered Plymouth from the Channel Fleet. Fitzroy left the command of the Orestes once she had entered Portsmouth for a refit on 28 January 1794.

He was posted captain on 29 March 1794 of the eighteen-year-old frigate Pomona 32, going out from Portsmouth on a cruise in July, and sailing for the Downs from the same port in early August where his command remained for some weeks. She returned to Portsmouth in October, and at the end of the month convoyed the homeward-bound West-India trade into the Thames. By early December the Pomona was at Arendal on the southern coast of Norway waiting to bring home the trade under the overall orders of Captain James Douglas of the Jason 38.

Continuing with the Pomona, at the beginning of March 1795 Fitzroy sent a small schooner privateer he had captured on the French coast into Plymouth, and on 12 April his command sailed on a cruise out of the Downs for the North Sea under the orders of Rear-Admiral Henry Harvey, prior to returning to that station on 6 May. He then took the Pomona out on a cruise from Portsmouth at the end of the month, in July was engaged in more convoy duty to the Downs, and on 19 August was off Weymouth where he fired a salute to the royal family who were on their annual holiday in that town.

Fitzroy was next appointed to command the French-built frigate Imperieuse 38, which was commissioned at Chatham on 30 August 1795. Throughout September and October she remained at the Kent port fitting out, and once at sea she unfortunately collided with the Sybille 38, Captain Edward Cooke, to the south of Cape Finisterre on 4 January 1796, creating some alarm for the safety of the latter vessel. During May the Imperieuse was docked at Portsmouth to replace her masts and rigging, and Fitzroy was to be castigated by the Admiralty for the number of desertions that occurred whilst his ship was in port. Another calamity ensued when having been out of the harbour for just a day the Imperieuse was involved in a collision with the Sans Pareil 80, Captain William Browell, which saw her lose her mizzenmast. In early June she took a convoy from Portsmouth around to the Downs and on 17 July she arrived at Sheerness before putting out of that port a fortnight later.

In the autumn of 1796 the Imperieuse was despatched to St. Helena under the orders of Captain Robert Watson of the Isis 32 to bring home the trade, and during the voyage south the two frigates detained but then released a homeward-bound Spanish ship from Manila carrying four million dollars of specie, being most lucklessly unaware that war had already been declared between Britain and Spain on 8 October. In October the Imperieuse was at sea between Table Bay and St. Helena, and rather than return to England she appears to have remained thereafter on the Cape station.

During the mutiny of the men-of-war at the Cape in October 1797 Fitzroy was approached by members of his crew to sign their pardon, but he vehemently refused and vowed that the only paper he would sign would be that authorising their execution. Declaring that he would no longer remain aboard his ship amongst such a mutinous rabble, he made his way to his boat and dared a sentinel to fire on him after the man had levelled his musket. Once the ships had returned to duty the Imperieuse was sent to cruise off Mauritius under the orders of Commodore George Losack, and she was back at the Cape by May 1798 before going under repair in October.

Fitzroy was succeeded aboard the Imperieuse by Captain Josias Rowley in January 1799, and in command of the Sphinx 20 he called at St. Helena to collect the homeward-bound East India fleet conversant with the orders of Commodore Losack, but then sailed on for England without the merchantmen to arrive home at the beginning of May. Following a court martial at Portsmouth later that month on board the Gladiator 44, presided over by Vice-Admiral Sir Roger Curtis, he was dismissed from the command of the Sphinx for misconduct and disobeying Losack’s orders. His defence was described as ‘mist animated’ but the court reached its damning conclusion after a three hour deliberation.

Upon being restored to employment Fitzroy joined the frigate Oiseau 36 in the latter part of February 1801, and within days of sailing from Plymouth on a cruise on the 24th of that month he was putting a prize crew aboard the St. Malo privateer lugger Espoir 14 after she had been captured off the coast of France by the British privateer Lord Nelson 10. On 11 May the Oiseau departed Plymouth with half a dozen victuallers for the Channel fleet, and she later cruised off Cape Finisterre where she re-captured the packet Lady Arabella and sent her into Oporto. On 18 August she returned to Plymouth with empty victuallers from the Channel Fleet, and in the same month Fitzroy was succeeded in command of the Oiseau by Captain Hon. John Murray, late of the Jason 36.

Lord Fitzroy died of consumption at the Hotwells in Bristol on 26 September 1801.