1772-99. Born on 14 April 1772, he was a son of Colonel George John Cooke of Harefield Park, Middlesex, and of his wife Penelope Bowyer, the sister of Admiral Sir George Bowyer. One of his brothers was Major-General Sir George Cooke, who lost an arm at the Battle of Waterloo, and another was Major-General Sir Henry Frederick Cooke, who became personal secretary to the Duke of York in 1827. Following the death of his father in 1785 Cooke’s mother married Major-General Edward Smith, an uncle of Admiral Sir William Sidney Smith.

Having spent a great deal of time in France between 1783-93 Cooke was commissioned lieutenant on 14 September 1790, and three years later he joined the Victory 100, Captain John Knight, the flagship of Vice-Admiral Lord Hood in the Mediterranean Fleet. Prior to the occupation of Toulon in August 1793 he was sent to hold negotiations with the French royalists as Hood’s emissary. Such a role was not without its dangers, for on one occasion he was briefly held prisoner by the mob, and on another was obliged to row away from a republican frigate which, being unable to catch his boat, unleashed her full broadside at him as he scrambled across the rocks. Upon the port of Toulon being handed over to the British he became its lieutenant-governor, and he held this position under the governor, Captain Hon. George Keith Elphinstone, until returning home with dispatches in November. In the meantime he had been promoted commander of the French prize Eclair 18 for purposes of rank only with seniority from 13 September.

On 12 April 1794 Cooke was posted captain of the Alcide 74, also for purposes of rank only, and continuing in the Mediterranean he served in the Corsican campaign from February to August, superintending the hoisting of cannon to the heights in the siege of San Fiorenzo before being sent home with dispatches. Returning once more to Corsica, he was later employed under the orders of Captain Horatio Nelson at Calvi before taking command of the Windsor Castle 98 with the flag of Rear-Admiral Robert Linzee in the Mediterranean.

In October 1794 he assumed the command of the Toulon-built Sybille 38, considered to be the largest ship of that rate ever built, which had been captured in June off Mykonos in the Greek Archipelago by the Romney 50, Captain Hon. William Paget, and which Cooke brought into Portsmouth in November. Here she was commissioned under his captaincy. For the greater part of 1795 he saw service off the French coast, being attached to Commodore Sir John Borlase Warren’s expedition which landed French Royalist troops in Quiberon Bay at the end of June. The Sybille returned to St. Helens from the coast of France at the beginning of August, and she cruised later that month with Commodore Sir Richard Strachan’s squadron of five frigates. During October she came into Portsmouth with officers from Quiberon Bay, and in early November entered Portsmouth for a refit in order to proceed to the East Indies. 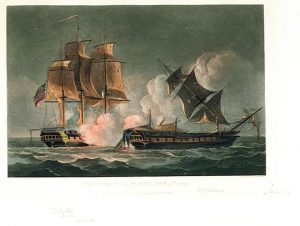 In March 1796 a number of newspaper reports gave the Sybille up for lost after a collision in the Channel with the Imperieuse 38, Captain Lord Augustus Fitzroy, had left her dismasted, the two vessels having ran into each other on opposite tacks. She had later been spotted lying dismasted in a fog off Portland but then not seen again, however dispatches were soon received announcing her safe arrival at Gibraltar. Here she was refitted with stores brought out from England by the Goliath 74, Captain Sir Charles Henry Knowles, and after resuming her voyage in August she reached the Cape at the beginning of October and Calcutta on 23 November.

Remaining on the East Indian station and occasionally undertaking convoy duty, by the end of 1797 the Sybille was off Macao having escorted a convoy from Madras to China with the Trident 64, Captain Edward Oliver Osborn, and the Fox 32, Captain Pulteney Malcolm. On 14 January 1798, with the Fox in company, she captured three Spanish gunboats out of Manila after luring their commanders into believing that the British frigates were French through his impeccable mastery of that language. Subsequently the two frigates lost four men killed, including the Sybille’s sailing master, in an attack on the island of Samboangon, with a further two being killed on another island when going ashore for water, and ten being taken captive. At the beginning of August the Sybille returned to Calcutta from Madras with the chief justice of Bengal, Hon. Sir John Anstruther, and she remained there for several weeks to undergo docking and a refit. In December she sailed back to Madras with the governor-general, Richard Wellesley, the Earl of Mornington.

On 19 February 1799 Cooke put to sea from Madras to seek out and fight the huge French frigate Forte 44 in the Bay of Bengal. When they met on 28 February the Forte was taken aback by the strength of the Sybille’s broadside but responded effectively, and within an hour Cooke was hit in the shoulder and the chest by grapeshot. The engagement raged on in the darkness for several more hours with the Sybille under the command of the first lieutenant, Lucius Hardyman, and the Forte eventually struck her colours having suffered over one hundred and fifty casualties. The Sybille suffered casualties of five men killed and seventeen wounded.

Captain Cooke was landed from an East India Company yacht at Calcutta on 10 March, and despite an optimistic prognosis he was to linger on in agony until the morning of 23 May before dying at Chouringhee, Calcutta. He was buried at South Park Street Cemetery, Calcutta and the East India Company erected a monument to his memory at Westminster Abbey.

Fluent in French, Cooke exercised the gun-crews regularly and was held in high esteem by all.