1729-1808. He was born in Nova Scotia, the younger son of Colonel Alexander Cosby of Stradbally Hall, Ireland, the lieutenant-governor of that colony, and of his wife, Anne Winnard. He was the uncle of Admiral William Wolseley.

In 1745 Cosby entered the navy aboard the bomb ketch Comet, Captain Richard Spry, serving in the Leeward Islands and being made prisoner when she was captured by a Spanish frigate shortly afterwards. Having been taken to Havana with Spry and other officers he was soon exchanged and then served from later the same year under this officer aboard the Chester 50, going out to the East Indies in 1747 and being paid off in 1748.

He continued with Spry aboard the Gibraltar 24 from June 1754 in North America and the Fougueux 64 in Vice-Admiral Hon. Edward Boscawen s fleet off the Canadian coast in 1755, being commissioned lieutenant on 28 January that year. He was still with Spry aboard the Orford 70 at the reduction of Louisbourg and the expedition to Quebec n 1759, and as the naval aide-de-camp to General James Wolfe he was present at that officer s heroic and celebrated death on the Heights of Abraham. 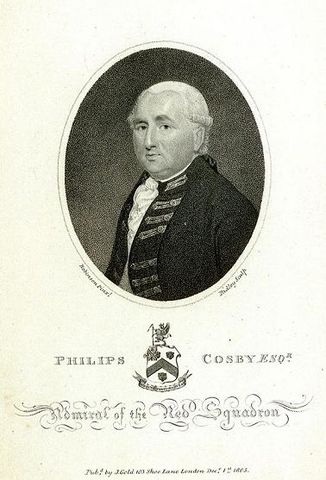 On 2 June 1760 Cosby was promoted commander of the sloop Laurel 12, and he saw further service aboard the sloop Beaver 14 before being posted to the frigate Hind 24 on 19 May 1761. Whilst standing by to take a convoy out from Cork Cosby suspended his first lieutenant, Henry Sandham, from duty after he had reported sick but then taken a boat with four men ashore at 2 a.m. in order to get drunk, the offence being compounded by the fact that the seamen had promptly deserted. After going out to Lisbon with an army convoy in May he remained with the Hind until October 1762, and thereafter he commanded the Isis 50 in the Mediterranean until the peace.

From 1766-70 he had the frigate Montreal 32 in the Mediterranean under the orders of his patron, Commodore Sir Richard Spry, during which commission he brought the body of the Duke of York home in October 1767.After returning with the Montreal to the Mediterranean he entertained Joseph II the Holy Roman Emperor and his brother the Grand Duke of Tuscany in April 1769 at Leghorn. He returned to Spithead in July 1770.

From 1771 Cosby held the enriching post of receiver-general of St. Kitts but returned home to Ireland in 1774.

In March 1778 he was appointed to the Centaur 74 in which he fought at the Battle of Ushant on 27 July. During the early part of 1779 he joined the Robust 74 as the replacement for Captain Alexander Hood who had resigned following the Battle of Ushant court-martials, and he set sail for North America in May with Vice-Admiral Marriot Arbuthnot s convoy, although their arrival was delayed when that officer temporarily detached his men-of-war to protect Jersey from a French invasion attempt The following spring saw him retire from the Charleston campaign as his ship was too heavy to cross the bar, and hence he was not present at the port s capture on 11 May 1780. The Robust subsequently led the line at the Battle of Cape Henry on 16 March 1781 where as a result of Arbuthnot s unfortunate tactics she received fire from the whole of the French fleet, leaving her unmanageable and with casualties of fifteen men killed and twenty-one wounded, the largest in the fleet..

Having been ordered to England because of the un-seaworthy state of the Robust, he set sail in the autumn carrying Lieutenant-General Lord Cornwallis and many other senior Army officers who had been granted parole by the rebels, but he then had to bear up for Antigua where his command was hove down. The Robust finally reached England in July 1782, Cornwallis having removed in the meantime to a merchantman, and she was paid off in September.

From 1785-9 Cosby was commander-in-chief in the Mediterranean with the rank of commodore, flying his broad pennant aboard the Trusty 50, Captain William Wolseley, and negotiating a treaty with the Barbary States in 1788. During this period he was appointed a colonel of marines on 24 September 1787. On 21 September 1790 he was promoted rear-admiral, becoming the commander-in-chief at Cork, and during the Russian armament of 1791 he flew his flag aboard the Alligator 28, Captain Isaac Coffin, and the Impregnable 98, Captain Sir Thomas Byard. In 1792 he was appointed port admiral at Plymouth with his flag aboard the St. George 98, Captains Thomas Hicks and Sir Thomas Byard.

He was promoted vice-admiral on 1 February 1793 and returned to sea at the start of the French Revolutionary War with his flag aboard the Windsor Castle 98, Captain Sir Thomas Byard, as third in command in the Mediterranean to Vice-Admiral Lord Hood. After serving at the occupation of Toulon from August 1793 he returned home in the Alcide 74, Captain Sir Thomas Byard, with the Mediterranean convoy at the end of 1794, having in company the captured Commerce de Marseilles 130 which had been brought out of Toulon.

Cosby did not see any further active service but commanded the impress service in Ireland until 1801, and he was promoted an admiral on 14 February 1799. He died at Bath on 10 January 1808 and was buried in the abbey.

He married a widow, Eliza Hurst, nee Gunthorpe of Southampton in 1792, but had no issue. His estate of Stradbally Hall in Queens County, which he had inherited in 1774 as the second son of the ninth son of his grandfather, passed to a distant cousin.

Cosby had a novel method of keeping errant merchantmen in order within his convoys by firing upon them. He was a keen card-player.