1758-1832. He was born on 25 August 1758 at Dover, the younger brother of Sir Edward Pellew who became Admiral Viscount Exmouth, and the third of four sons of Samuel Pellew, a Cornishman and commander of a local packet who had fallen on hard times. His mother, Constantia Langford, remarried when Pellew s father died early, leaving he and his siblings to be brought up by their grandparents. He was the uncle of Captain Viscount Pownall Bastard Pellew, and of Admiral Hon. Sir Fleetwood Broughton Reynolds Pellew.

In the summer of 1771 Pellew entered the service aboard the sloop Falcon 10, Commander Cuthbert Baines, serving at Barbados for the next three years. In June 1775, after a year on the beach, he joined the Plymouth-based guardship Albion 74, Captain John Carter Allen, and in February 1776 he removed to the Flora 32, Captain James Brisbane, being present at the recapture from the Americans of the frigate Fox 28. After the Flora was sunk off Rhode Island in July 1778 to prevent her capture by the French he returned to England, where he appears to have been employed for a short while at the end of the year aboard the Licorne 36, Captain Henry Bellew, and thereafter the Royal George 100, Captain John Colpoys, the flagship in the Channel of Vice-Admiral Sir Robert Harland.

Pellew was commissioned lieutenant on 1 April 1779 and he joined the newly acquired Drake 14, Commander William Browne, at Deptford, departing for the Leeward Islands from Cove with a convoy of troop transports on 31 March 1780. In July 1781 he removed to the frigate Apollo 32, Captain Charles Powell Hamilton, taking a convoy out to the Mediterranean in early 1782, the misidentification of which off Cape Spartel inadvertently caused Captain Charles Morice Pole of the success 32to burn the prize Spanish frigate Santa Catalina 34, which he had captured on 16 March. 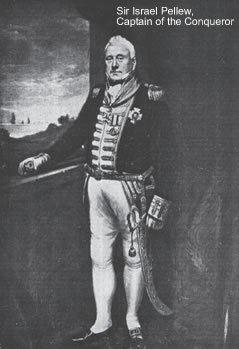 During October 1782 he was given the command of the cutter Resolution 14 in the North Sea, with which he captured the prolific Dutch privateer Flushinger 16 after a 14-hour chase and running fight off Flamborough Head on 20 January 1783. Unfortunately the ending of hostilities prevented his advancement, but he did remain with the Resolution for a further four years, seeing employment on the Irish station.

In April 1789 Pellew was appointed the first lieutenant of the Salisbury 50, Captain Davidge Gould, flying the flag of Vice-Admiral Mark Milbanke at Newfoundland, and on which he later served as the first lieutenant to his brother Edward when that officer assumed command in June 1790. Israel Pellew was promoted to the rank of commander with a host of other officers on 22 November following the termination of the Spanish Armament, but he thereafter remained unemployed.

Still without a ship at the commencement of the French Revolutionary War, Pellew joined his brother s frigate, the Nymphe 38, as a volunteer, and this proved to be a stroke of good fortune when he was able to participate in the capture of the Cl op tre 40 on 19 June 1793, on which occasion he shot away the enemy s wheel. Upon being presented to the King by his brother Pellew was posted captain at the instigation of the monarch with seniority from 25 June, and he was appointed for purposes of rank only to the Danae 32.

In September 1793 he was appointed to the tiny frigate Squirrel 24, serving in the North Sea, being engaged in convoy duty from Liverpool during the spring of 1794, and visiting ice-bound Helvoets on the Dutch Coast in January 1795 to embark the British ambassador, Lord St. Helens. In April 1795, as a result of lobbying on his behalf by his brother, Pellew was appointed to the twelve-pounder frigate Amphion 32 in which he sailed for Newfoundland in June, to be employed in the North Sea on her return.

On 22 September 1796, whilst the Amphion was lying in the Hamoaze, Plymouth, prior to joining his brother s squadron, she was blown apart by an explosion that left over three hundred and fifty people dead. Pellew had been dining aboard with his first lieutenant and an old friend, Captain William Swaffield of the Overyssel 64, when he felt an initial shock, and suspecting that gunpowder was the cause he and his guests had rushed for the quarter gallery in order to leap into the water or onto a hulk that was lying alongside. At that moment the ship had exploded, and when Pellew had come too he had found himself lying on the hulk with serious wounds to his face and chest. He was taken to the residence of the commissioner, Captain Robert Fanshawe, in a complete daze with no recollection of the explosion, and he spent some time convalescing there. Captain Swaffield unfortunately did not survive the wreck. The resulting enquiry concluded that the gunner had been selling the gunpowder for personal gain, and by carelessness had left a trail to the magazine that had ignited, however, Pellew had previously complained of the magazine being unsafe and he considered the gunner s culpability to be unproven.

Appointed to the Greyhound 32 in the following spring after more intense soliciting of the Admiralty by his brother, he was soon put ashore during the mutiny at Plymouth on 26 April 1797 amidst accusations of cruelty, and he refused to rejoin his ship when order returned. Again Edward lobbied fiercely on his behalf and in August Pellew was appointed to the Cleopatra 32 in succession to Captain Charles Penrose. Serving at first in the Channel, he captured the Lorient-based privateer Emilie 18 on 26 March 1798 before going out to Halifax in the late summer where he remained for two years.

Whilst on passage to undertake a cruise in the Caribbean during 1800, the Cleopatra survived a hurricane off Cape Hatteras, North Carolina, which at one point saw her forecastle and then her quarterdeck totally submerged as she ploughed a trough between two huge waves. On 22 March 1801 her boats in company with those of the Andromache 32, Captain Robert Laurie, were repulsed by a forewarned enemy during an attack upon a richly laden convoy of thirty Spanish vessels protected by three gallies in Levita Bay, Cuba, resulting in the death of twelve men including the Cleopatra s first lieutenant with another seventeen men wounded. The Cleopatra s misfortune s continued when she became stranded for three days on the island of Abaco in the Bahamas, being forced to jettison her guns and part of her ballast in order to get off, whilst during the cruise she also suffered the ill-luck to lose her third lieutenant when he fell overboard and drowned.

Towards the end of April 1801 the Cleopatra returned to Halifax prior to entering Falmouth from Nova Scotia after a 26-day voyage at the beginning of December, sailing on thereafter to Portsmouth. Pellew left the frigate in February 1802, and he remained unemployed for over two years throughout the peace and the commencement of the Napoleonic War.

In April 1804 he was appointed to succeed the newly promoted Rear-Admiral Thomas Louis aboard the Conqueror 74, this being a plum appointment, in which vessel he sailed from Plymouth for the Channel fleet off Brest on 12 May. He subsequently went out to Gibraltar from Plymouth to join Vice-Admiral Lord Nelson s Mediterranean fleet, anchoring off the Rock on 16 September, and he participated in the chase of the Toulon fleet to the West Indies following its breakout on 29 March 1805. 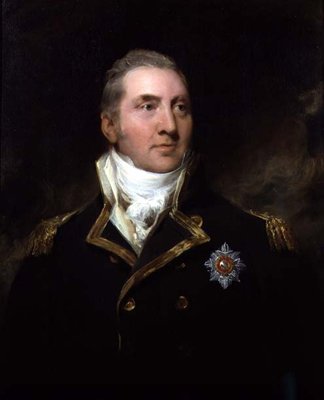 At the Battle of Trafalgar on 21 October 1805 the Conqueror was fourth in line behind Nelson s flagship, the Victory 100, and when the French flagship Bucentaure 80 struck to Pellew s ship after the assault by the British van he sent his marine captain, James Atcherley, to take possession. Atcherley duly received the sword of Vice-Admiral Pierre Villeneuve, who appeared somewhat honoured to have surrendered to Captain Pellew, although sadly for Israel the Pellew the French commander-in-chief had in mind was Sir Edward. By this time the Conqueror had already moved on to engage her next opponent, the huge Santisima Trinidad 140, so Atcherley carried Villeneuve s sword aboard the Mars 74, where a lieutenant took possession of it. Eventually the sword was delivered to Vice-Admiral Lord Collingwood who kept it, being unaware that according to custom it was the rightful prize of Captain Pellew. Although much chagrined, Pellew was gentleman enough not to pursue the matter. During the action the Conqueror lost three men killed and nine wounded, although Pellew himself did not report a wound that he suffered when a cannonball just missed him. In the storm that followed the battle the Conqueror s towrope to the Bucentaure parted and the French flagship drove aground, although happily without great loss of life amongst her reduced complement and the British prize crew.

In 1806 the Conqueror served off the Gironde where her boats helped cut out the C sar 16 on 15 July, and she later saw duty at the blockade of Cadiz, prior to returning to Falmouth on 9 November. She departed for Brest three weeks later, and then came into Plymouth at the beginning of November 1807 to be fitted out for foreign service. Shortly afterwards she departed for Lisbon to serve under the orders of Rear-Admiral Sir William Sidney Smith, taking part in the evacuation of the Portuguese Royals on 29 November.

In May 1808 it was announced that Pellew was to be succeeded in command of the Conqueror by Captain Edward Fellowes, and that he had been appointed to the position of the pay captain afloat at Plymouth. On 31 July 1810 he was promoted rear-admiral, and in April 1811 he became captain of the fleet to his brother in the Mediterranean aboard the Caledonia 120, Captain Jeremiah Coghlan, in which capacity he witnessed the skirmishes with the Toulon fleet during July-November 1811 and on 5 November 1813.

On 2 January 1815 he was nominated a K.C.B. and despite returning to the Mediterranean in the spring of 1815 aboard the Boyne 98 as captain of the fleet to his brother following Napoleon s escape from Elba he was prevented by Edward from accompanying him to the Bombardment of Algiers in August 1816 as the risks of life were considered too great.

Pellew did not thereafter serve again, but in due course he became a vice-admiral on 12 August 1819 and an admiral on 22 July 1830.

Admiral Pellew died in Ham Street, Plymouth after a long and painful illness on 19 July 1832. Typically Edward, the ennobled Viscount Exmouth, had rushed to his bedside at great detriment to his own poor health. He was buried at Charles the Martyr Church, Plymouth.

He married Mary Gilmore in 1792, by whom he had one son Edward, a captain in the lifeguards, who was slain in a duel in Paris on 6 October 1819 by a former officer of the guards, Lieutenant Theophilus Walsh, with whose young wife he had eloped. Admiral Sir William Sidney Smith, then resident in Paris, assisted greatly in arranging Edward s affairs and funeral.

Like his brother, Pellew considered himself a Cornishman despite his place of birth, and he benefited greatly from the influence of Viscount Falmouth during his early years. His later career was then greatly enhanced by the brilliance and patronage of his brother. Viewed as neither inept nor particularly talented, apart from perhaps an expertise in gunnery, he was a deeply religious man who had a reputation for tyranny towards his crew.