1730-1806. Born on 10 August 1730 at Gosport, he was the third but sole surviving son of Curtis King, a sailing master and master-attendant at Deptford, and of his wife Mary, sister to Commodore Curtis Barnett.

In 1738 King entered the service aboard the Portsmouth guardship Berwick 70, Captain Peter Solgard, on which vessel his father was the sailing-master, and he then served with his uncle, Commodore Curtis Barnett, in the Mediterranean aboard the Dragon 60, in the Channel aboard the Prince Frederick 70 from 1742, and in the East Indies aboard the Deptford 50 and Harwich 50 from 1744. On 1 February 1746, three months before his uncle s death, he was promoted lieutenant, and after serving aboard the Preston 50, Captain John Amherst, he returned to England from the East Indies at the cessation of hostilities in 1748. 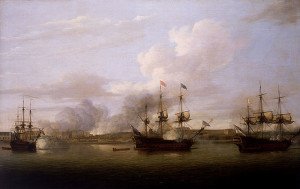 After a period of unemployment he went out to the East Indies in 1754 aboard the Tiger 60, Captain Thomas Latham, and after moving to Rear-Admiral Charles Watson s flagship, the Kent 64, Captain Henry Speke, he was promoted commander of the Kingfisher 10 on 23 July 1756. He subsequently captained the fireship Blaze, and he joined the boats of the squadron as a volunteer in the landing party at the capture of Calcutta and Hoogly in 1757. The Blaze having been decommissioned, King returned to England with Rear-Admiral Charles Watson s despatches on board the sloop Pilot, enduring a desperate passage around the Cape and reaching England after a five-month voyage.

Somewhat surprisingly he was not immediately posted captain, being appointed instead to the sloop Bonetta 14 in January 1758, and leaving Portsmouth for the West Indies with a large convoy in April. Whilst serving in the Leeward Islands he was posted captain of the frigate Rye 20 on 29 January 1759, and after transferring in the spring to the Ludlow Castle 44 he returned home escorting a convoy in January 1760. Back in England King was appointed to the Argo 28, cruising off France and in the North Sea, and capturing the Dunkirk-based snow privateer Duc de Biron 15 on 11 June 1761 after a chase of eight hours.

Following the declaration of war by Spain he returned to the East Indies, departing in February 1762 and giving passage to Colonel William Draper who would lead the land forces in an expedition against Manila. On 31 October the Argo joined the Panther 60, Captain Hyde Parker, in the capture of the rich Acapulco-bound galleon Santisima Trinidad, earning each of the captains approximately 30,000 guineas in prize money, equivalent to over six million pounds in today s money. After transferring to the Grafton 68 in July 1763 King returned to England in company with the captured galleon and the Lenox 74, Captain Robert Jocelyn.

Thereafter Captain King remained unemployed until December 1770 when he recommissioned the Northumberland 70 during the Spanish dispute. He was shortly afterwards appointed to the new Ardent 64, but instead in March 1771 commissioned the new Asia 64, which remained at Portsmouth for three years as a guardship.

In January 1778 he was appointed to the Monmouth 64, moving to the Pallas 36 shortly afterwards and going out to Newfoundland in May. Having participated in the occupation of St. Pierre and Miquelon on 14 September under the orders of Commodore John Evans he exchanged with Captain Thomas Davy into the Europe 64 and returned to England where he briefly served under the orders of Vice-Admiral Lord Shuldham at Plymouth.

In January 1779 King was appointed to the Exeter 64 which left Portsmouth for the East Indies in March with Vice-Admiral Sir Edward Hughes force, and he was soon ordered to fly his broad pennant as commodore and second-in-command with Henry Reynolds acting as his flag-captain. At the Battle of Sadras on 17 February 1782 the Exeter was overpowered by three Frenchmen at the rear of the English line and left with no masts standing, whilst also suffering the heavy casualties of ten men killed and forty-five wounded. When Captain Reynolds was killed at his side King found himself soaked blood and brains, but nevertheless when his sailing master asked what is to be done he replied nothing is to be done but to fight her until she sinks. A fortunate change in wind allowed the van to come back and assist him, and after two hours the brave Exeter was saved.

With Captain Charles Hughes acting as his flag-captain King remained on the Exeter to fight at the Battles of Providien on 12 April 1782, and he later shifted his broad pennant to the Hero 74 with Hughes as his flag captain, in which he fought at the Battles of Negapatam on 6 July and Trincomale on 3 September, following which Theophilus Jones became his flag captain. At the final battle with the French, that of Cuddalore on 20 June 1783, King had a speaking-trumpet shot out of his hand.

On learning of the end of hostilities with France he set off for England with the first division of Hughes s fleet consisting of seven sail of the line and two other vessels, reaching the Cape from Madras on 10 December having lost four hundred men to sickness. During the early months of 1784 he remained at the Dutch colony whilst seeking to restore sixteen hundred sick seamen to health, and he did so without procuring any great assistance from the governor who took a literal view that the suspension of hostilities between Britain and the Netherlands was only temporary, and that he was therefore required to give preference to his erstwhile French allies. Whilst at the Cape King ordered the burning of the un-seaworthy Exeter once it was deemed that she could not undertake the voyage back to England. The squadron eventually arrived at Spithead on 12 May after a two-month voyage, and on 2 June King was knighted. He then set off that autumn for Bath with his wife.

King was promoted rear-admiral on 24 September 1787, and during the Spanish Armament in 1790 was appointed commander-in-chief in the Downs with his flag initially aboard the Adventure 44, Captain John Inglefield, and from August the Pomona 28, Captain Henry Savage, prior to joining the newly commissioned Dictator 64, Captain Richard Rodney Bligh, on which he remained from the middle of October until striking his flag on 9 December. He was thereafter employed in the Russian Armament of 1791, hoisting his flag on 5 April at Portsmouth and serving under Vice-Admiral Lord Hood as a junior admiral at Spithead aboard the Saint George 98, Captains John Samuel Smith.

On 29 June 1792 he was created a baronet at a levee given by the King, and he went out at the end of the following month to Newfoundland as lieutenant-governor and commander-in-chief with his flag on the Assistance 50, Captain John Samuel Smith, returning home on 24 November after a passage of sixteen days. In July 1793 he returned to Newfoundland aboard the Stately 64 with Captain Smith, returning home at the end of the year as was the custom, but losing contact three days out of St, Johns with his convoy, seventeen of which were captured in the Channel by Rear-Admiral Pierre Jean Vanstabel’s squadron which had just escaped the clutches of the Channel Fleet.

King was promoted vice-admiral on 1 February 1794, and after becoming M.P. for Rochester in the Admiralty interest he was appointed commander-in-chief at Plymouth in December with his flag on the Cambridge 80, Captain Richard Boger, a position he retained until April 1799 with a long break from February-July 1796 when Vice-Admiral Richard Onslow deputised in his stead. He remained as the M.P for Rochester until 1802.

On 1 June 1795 he was promoted admiral and he died at his residence in Devonshire Place, Marylebone, after a short illness on 7 November 1806.

King married Susannah Margaret Coker of Mappowder, Dorset on 30 November 1769 and before her death at Southampton in October 1794 they had three daughters in addition to Vice-Admiral Sir Richard King and another son, Robert, who died in 1793. His youngest daughter, Elizabeth, married Admiral Sir Charles Rowley. His London address was Devonshire Place, Marylebone, and his long-time country address was Bellevue, Southampton, a mansion that was described as elegant, and was considered fit enough to host Their Majesties in the autumn of 1792.

As well as being exceedingly wealthy King was apparently a kind, good-hearted man. A supporter of William Pitt in Parliament, he spent over 5,000 on two electoral campaigns, losing the first at Rochester in the by-election of 1792 but being elected unopposed in 1794.