1728-@1800. He originated from a family long settled in Winchester, Hampshire.

Brereton joined the navy in 1746 aboard the Eagle 60, Captain George Brydges Rodney, and was present under that officer in Rear-Admiral Edward Hawke s victory over Commodore l Etendu re on October 14 1747 off Cape Finisterre. During the early years of the peace he saw service under Rodney in the Rainbow 44 at Newfoundland.

He was further employed in the East Indies under the flag of Vice-Admiral Charles Watson aboard the Kent 64, Captain Henry Speke, and on 4 July 1755 he was commissioned lieutenant of the Salisbury 50, Captain William Martin. After subsequently returning to the flagship Kent he was posted captain on 25 March 1758, joining the Queenborough 24. 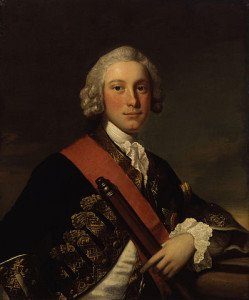 Vice-Admiral George Pocock, who ordered Brereton’s court-martial following the Battle of Cuddalore in 1758

In the absence of Captain William Martin, Brereton commanded the dull-sailing Cumberland 56 at the action off Cuddalore on 29 April 1758, but his ship was so slow into battle that the French were able to concentrate their entire fire on four of his consorts. The Cumberland then almost collided with the Yarmouth 64, bearing the flag of Vice-Admiral George Pocock, and this caused a chain reaction that forced three vessels to back their topsails at the height of the action. She did eventually manage to engage a French 50 gun-vessel, and although the general action was inconclusive the British had the better of it. In the following month Pocock brought three of his captains to book, with Brereton, who had been arrested, receiving the least severe sentence of a loss of one year s seniority at his court-martial in Madras.

Pocock brought the French to action again off Negapatam on 3 August 1758, with Brereton commanding the Salisbury 50 which he had joined two months earlier. Once more the British had the better of the action, although Brereton did not greatly distinguish himself. On 10 September 1759 he commanded the dull-sailing Tiger 60 in Pocock s ferocious action with the French off Pondicherry. In this action he was wounded to the head and his ship was so badly damaged that she had to be taken in tow. The Tiger s casualties of one hundred and sixty-eight were a third of those sustained by the whole squadron during the battle, one which saw the French put to flight.

During the siege of Pondicherry over the winter of 1760-1, Brereton commanded the Falmouth 50, with his ship being dismasted in a storm before the town surrendered on 15 January. In August 1761 he sailed from Pondicherry to Rodriguez, and he later participated in Rear-Admiral Samuel Cornish s capture of Manila during September-October 1762, being one of three captains in command of the boats that landed the troops. He remained at Manila as the military governor for the next three years, during which time he lost his clerk and his assistant who were killed by Indians . The Falmouth was eventually condemned at Batavia, and after briefly commanding the Seaford, Brereton returned home aboard a Dutch East Indiaman in 1765, being instrumental in preventing her from foundering in a storm during her entry to the Channel.

In 1766, upon Brereton petitioning the King, his court martial at Madras in 1758 was reviewed by the Board of Admiralty who found him liable of an error of judgement only. In view of his excellent service thereafter the restoration of his seniority was recommended, and the King duly agreed.

In May 1778 Brereton arrived at Plymouth to commission the brand new Duke 90, but immediately fell afoul of the port admiral, Lord Shuldham, and as a consequence had great difficulty manning his command and putting to sea. When he did join the Channel fleet under Admiral Hon. Augustus Keppel it was only a few weeks before the Battle of Ushant on 27 July. By barely engaging with the enemy and suffering no casualties he again found his character and conduct brought into question, with deprecatory rumours circulating at Plymouth and being published in the newspapers. Against Keppel s inclination Brereton adhered to the ill-advice that he should submit himself to a court of enquiry, and when this sat he found himself facing accusations of drunkenness from his marine officers. The eventual conclusion found that he had been drunk on the day before and the day after the battle, but had not been guilty of any inappropriate behaviour on the actual day of the battle. Even so, he was somewhat surprisingly removed from his post. Brereton s supporters were to claim that the whole case was a conspiracy on behalf of Lord Shuldham, and there were many inconsistencies both in the contradictory evidence of the marine and sea officers and in the actual legality of the enquiry. Even so, he was never re-employed.

Brereton did not achieve flag rank, having been put on the retired list in 1786, and he probably died at Wykeham, Hampshire in the early 1800 s.

In 1761 he took prisoner Caesario Rodorigo, a Madagascan slave to a French officer, and brought him back to England where he remained in Brereton s service for forty years under the name of John Elton until his death in 1801.

In the early 1770 s Brereton represented to the Admiralty that fir and pine seeds be brought from America and planted to grow timber for the ships of the navy. He also made representation for the settlement of expenses incurred whilst he was the governor of Manila, but it appears that these were never reimbursed.