Having been tempted to sea by the tale of Robinson Crusoe, Cunningham entered the Navy from the merchant service as a midshipman and found a berth aboard the crack frigate Aeolus 32 Captain Christopher Atkins, which sailed for Jamaica in February 1777. He subsequently took a position aboard the Bristol 50, Captain Tobias Caulfield, the flagship of Rear-Admiral Sir Peter Parker, which arrived at Jamaica in February 1778, and later in the year he was seconded to the Ostrich 14, Commander Peter Rainier. This vessel fought a bloody but successful three hour action off Savannah Point with the privateer Polly on 8 July that left thirty of the enemy dead, the Ostrich’s captain and first lieutenant wounded, and another twenty-six men wounded in addition to five killed. In June 1779 Cunningham was appointed acting lieutenant of the sloop Port Royal 18, Commander John Cowling. 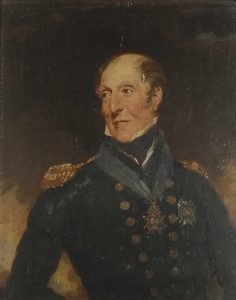 Continuing to serve on the Jamaican station, at the end of 1779 Cunningham became acting first lieutenant of the Hinchinbroke 28, Captain Horatio Nelson, but at the beginning of 1780 he removed to the Pallas 36, Captain Thomas Spry, remaining with that vessel at Jamaica until the summer of 1782 when she was ordered home under Captain Christopher Parker. Preferring to advance his career in the Caribbean, Cunningham obtained a transfer to the Ajax 74, Captain Nicholas Charrington, as her second lieutenant. On 6 November 1782 his commission as a lieutenant was confirmed, and he was appointed to command the hired brig Admiral Barrington. After being despatched by Rear-Admiral Joshua Rowley to patrol off Turks Island he was taking on provisions at Jamaica when the French landed on the former Island, following which an attempt by Captain Nelson to retake it failed. Cunningham’s command was paid off in May 1783 and he returned to England.

In February 1789 he sailed for the East Indies with Commodore Hon. William Cornwallis aboard the Crown 64, Captain James Cornwallis, and on 28 October 1790 was promoted commander of the sloop Ariel 16. It has been stated that in May 1792 he returned to England aboard the Crown, Captain Robert Manners Sutton, although the Norfolk Chronicle had earlier reported that he had arrived home at Eye in November 1791.

In November 1792 Cunningham was appointed to the Speedy 14 with reports that she would sail north to put down a mutiny at Shields, and he was also given the task of fitting out of a number of auxiliary ships for the fleet. By January the Speedy was in the Downs, and after being sent with despatches to the Mediterranean she captured the French vessel Felicité, bound from Carolina to Marseilles, and the Marie Aime Vieules bound from Mogadore to Marseilles, both prizes being sent into Gibraltar. On 5 October the Speedy was present when the French frigate Modeste 36 was cut out at Genoa by a squadron otherwise consisting of the Bedford 74, Captain Robert Man, and the Captain 74, Captain Samuel Reeve. Cunningham’s part in the action was restricted to sending his boats in to bring two tartans out from the harbour.

A week later, on 12 October 1793, Cunningham became the beneficiary of the cutting out of the Impérieuse 38 by the Captain at Spezzia, being posted to the vessel which was renamed the Unité. In April 1794 he exchanged with Captain William Wolseley of the Lowestoffe 32, and during the Corsican campaign which had commenced in February his vessel cruised for three months off Calvi with what the commander-in-chief, Vice-Admiral Lord Hood, described as ‘infinite diligence, zeal, and perseverance’. Cunningham was later sent home with Hood’s dispatches which he delivered to the Admiralty in London on 1 September.

In April 1796 he was appointed to the brand-new fir-built frigate Clyde 38, going down from Chatham to Blackstakes to take on her ordnance towards the end of June. In July he embarked Lord Stormont at Sheerness for the continent where the young nobleman was to complete his education at Leipzig, and he returned home from Cuxhaven with Lady Compton a passenger. During this initial voyage it was reported that the Clyde’s guns were too heavy for a fir built frigate. In November she sailed from Portsmouth for the Downs, from where she was to cruise over the next few months.

To his immense credit Cunningham almost single-handedly prevented the Clyde’s men from joining the mutiny at the Nore which had broken out on 12 May 1797, prevailing upon them to remain loyal whilst displaying every appearance of having joined the mutiny. For the next seventeen days the frigate remained under the guns of a mutinous ship, but on the night of 29 May Cunningham arranged for her cable to be slipped, and after escaping she became flagship to the commander-in-chief, Vice-Admiral Charles Buckner and then of Vice-Admiral Lord Keith.

Having escorted a convoy to Elsinore, the Clyde returned to the Humber with the homeward-bound fleet in early August, whereupon she went around to Portsmouth before paying a brief visit to Weymouth where the Royal Family were enjoying their annual holiday. At the end of October it was reported that she had put out of Portsmouth with the West Indies convoy, but shortly afterwards she entered Plymouth prior to going out on a cruise. She subsequently captured two French privateers, the Bayonne-based Succès on 13 December and the Dorado two days later, although tragically the latter prize capsized when the young officer placed in command of her pushed too much sail aloft in an attempt to either prove his or the ship’s worth, leaving only four survivors from her prize crew of twenty-two.

Whilst in Cawsand Bay during February 1798 the Clyde seized the gun-boat William which had come in from Guernsey with a cargo of contraband, and she remained employed in the Channel, although she was again later in attendance on the King at Weymouth during his late summer holiday. In October she ran afoul of a Swedish merchantman which had to put into Plymouth to repair damage, and continuing that month under the orders of the Channel Fleet commander-in-chief she took the French schooner letter of marque Air on 10 January 1799, and three days later the Granville privateer Bon Ordre 16. In June she he came into Plymouth with a number of other men-of-war from the Channel Fleet under Admiral Lord Bridport before going out on a cruise. 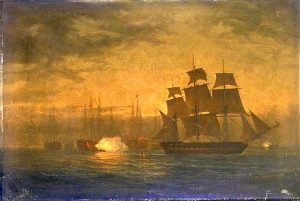 The Clyde escapes from the Nore Mutiny

On 20 August 1799 off the Garonne, the Clyde easily captured the French frigate Vestale 36, Captain Michel Pierre Gaspard, a success that led to the King leading the whole audience in a chorus of ‘Rule Britannia’ when he received the news at the theatre in Weymouth. In fact the Vestale had not only lost forty men through sickness in the West Indies, but she had also been roughed up by the Terpsichore 32, Captain William Hall Gage, and thus the two hour action between her and the Clyde had been most one-sided. During the engagement two men were killed and three wounded aboard the British frigate, as compared to ten men killed and twenty-two aboard the Frenchman. After being brought into Plymouth it was decided that the Vestale would not be bought into the navy, but the Clyde’s first lieutenant, Alexander Kerr, was promoted commander.

Continuing in the Channel, and at the end of the campaign that had commenced with the breakout of the Brest fleet on 25 April 1799, the Clyde reported on the presence of forty sail of the line in Brest under French and Spanish colours in October, and after a long stint off the French port she came into Plymouth on 24 December. In March 1800 she escorted the Agamemnon 64, Captain Robert Devereux Fancourt, into Falmouth after that vessel had grounded on the Penmarcks, and she was with the Channel Fleet in early summer, There followed a most prolific cruise which saw the capture and destruction of a number of enemy privateers, merchantmen and letters-of-marque, with Cunningham providing Admiral the Earl of St. Vincent with a list of his captures from Plymouth Sound on 22 October. Unfortunately a chase of the French frigate Franchise 38 did not bear fruit, with the enemy resorting to heaving her guns over the side in order to escape. The Clyde also spent some of the time that year employed close into to the French and Spanish coasts so that a painter by the name of John Thomas Serres could provide representations of the vital landmarks for the Admiralty.

In the spring of 1801 the Clyde patrolled off Brest, and during the summer Cunningham flew a commodore’s broad pennant as the senior officer commanding the blockade between Le Havre and Ile de Bas, serving under the orders of Commodore the Duke of Bouillon at Jersey. On 21 July one of his squadron, the Jason 36, Captain Hon. John Murray, was wrecked near St. Malo, and when it became apparent that she could not be re-floated Cunningham’s first lieutenant, William Mounsey, burned her under fire from the shore batteries. The Clyde was eventually paid off at the Nore on 24 June 1802 following her most successful commission.

In the early summer of 1803, and following the re-opening of hostilities with France, Cunningham joined the Princess of Orange 74 at Chatham, going down to the Nore from the Medway in August, and taking command of a small squadron off the Texel later that month. He returned to the Nore after a six week cruise off the Dutch coast on 22 September to take up an appointment on the Leopard 50, it being intended that he assume command of a flying squadron of frigates and smaller vessels, but shortly afterwards he was appointed the commissioner of the Victualling Board at the behest of the first lord of the Admiralty, the Earl of St. Vincent.

From June 1806-23 Cunningham was commissioner of the docks at Woolwich and Deptford, thereafter holding the post of superintendent at Chatham from 1 April 1823 until 9 May 1829, following which duty he retired with the rank of rear-admiral. In October 1830 he was received with a number of other naval officers by King George IV at the Brighton Pavilion, and by January 1831 he was in Bath with his family before moving up to Cheltenham in April and later returning home to East Anglia. On 24 October 1832 he was made a commander of the Royal Hanoverian Guelphic Order of Knighthood, and he became a K.B. on 6 November.

He was married twice, initially to a Miss Boycott, a clergyman’s daughter from Norfolk, who died at Eye on 2 November 1794, and secondly on 10 February 1797 at Chatham to Beatrice, the third daughter of the commissioner, Captain Charles Proby. After becoming a widower when his wife died at Chatham in the very same room where Captain Proby had died, he had the misfortune to lose his eldest son, a twenty-year-old midshipman, on 11 November 1822. At the time of his death he was living with his daughters at the family seat of Oak Lawn House near Eye. He had a number of children, whilst Captain Charles Cunningham Boycott, the infamous Irish landlord, appears to have been named after him.

A good man, professional and humane, Cunningham was considered to be ‘an enlightened disciplinarian.’ He was described as ‘spare and well-built’. In his later years he published an account of the Clyde’s role in the 1797 mutinies.