Died 1789. He was the son of Major William Walters and of his wife Rebecca Palliser, the elder sister of Admiral Sir Hugh Palliser. 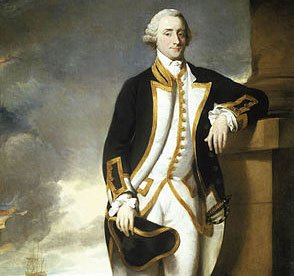 Walters was the nephew of Admiral Sir Hugh Palliser, and in a sign of the times he was selected to sit on that officer’s controversial court martial in 1779.

Walters was commissioned lieutenant on 27 December 1762.

He was posted captain on 2 September 1773, joining the Salisbury 50 with the broad pennant of Commodore Sir Edward Hughes and sailing for the East Indies in November before returning home in the latter part of 1777.

In April 1779 he somewhat controversially sat on the court-martial of his uncle, Vice-Admiral Sir Hugh Palliser, to investigate that officer s conduct at the Battle of Ushant on 27 July 1778. He joined the Princess Amelia 80 in early 1779 and was employed in the Channel fleet retreat during August before leaving her early in the following year and not thereafter seeing any further service.

He died on 16 December 1789, his address at the time being given as Greenwich Hospital where his uncle was the governor.

Walters married Mary Orfeur of County Wexford, Ireland, and had issue two sons as well as two daughters who did not survive childhood. His elder son, Hugh Palliser Walters, assumed Sir Hugh Palliser s baronetcy in 1796 and his second son, William, died a lieutenant in the army at St. Vincent in 1798.