c1745-1783. He was the second son of Sir George Wheate, the 3rd Baronet of Glympton, Oxfordshire, and of his wife, Avice Ackworth, the daughter of the Surveyor of the Navy from 1715-49, Sir Jacob Acworth. The family settled in Holborn, London, and thereafter in Lechlade, Gloucestershire.

On 26 January 1760 the fifteen year-old Wheate inherited the family baronetcy upon the death of his elder brother, George. Having earlier joined the navy he was commissioned lieutenant on 20 June 1765. 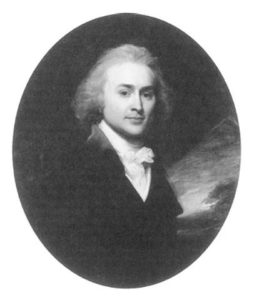 Wheate’s marriage to the teenage American beauty, Maria Shaw, was ridiculed by many, including the future US president, John Quincy Adams.

During operations surrounding the Channel fleet retreat of August 1779 he was the first lieutenant of the Marlborough 74, Captain Taylor Penny, and he was ordered back to Plymouth aboard the sloop Cormorant 14, Commander Roddam Home, before travelling overland for the Admiralty to warn the first lord that the French fleet was at sea. Wheate was promoted commander on 15 November, and after joining the Ostrich 14 he was employed in the Downs prior to taking a convoy out to New York in 1781 and returning home in May of the following year.

He was posted captain on 2 April 1782 with his appointment to the Cerberus 32, and he joined Captain Samuel Reeve s flying squadron of four sail of the line and three frigates in the Western Approaches and the Bay of Biscay. On 25 October he took the Spanish privateer San Christobel, and by the end of the year was employed in North American waters.

Wheate died of yellow fever at Bermuda on 12 February 1783 and was buried two days later at St. Peter s Church, St. George s. Just nine days after his death the Cerberus was wrecked upon striking rocks in Castle Harbour under the command of Lieutenant Thomas Parkinson.

Wheate married the American-born Maria Shaw on 16 December 1782, who at the time was described by the future President of the United States, John Quincy Adams, as being one of the belle s of New York, but not yet sixteen . Given that Wheate was portrayed by Adams as being between sixty and seventy years old, even though he was in fact in his late thirties, it was perhaps unsurprising that the marriage became the subject of much gossip, and that a poem was composed that denigrated her rush to marry the wealthy old man. On 26 April 1788 his widow married the future Admiral Hon. Sir Alexander Cochrane, by whom she had three sons and two daughters

Wheate s address was given as Lechlade, Gloucestershire at the time of his will, and the family baronetcy passed to his younger brother, the Reverend Sir John Thomas Wheate, upon his death.

In 2011 Wheate s remains were discovered in Bermuda, and these indicated that he was about 5 feet 3 inches tall and had been in good health for an older man