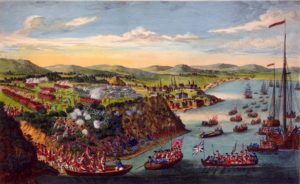 Cleland was present at the capture of Quebec in 1759

Cleland was commissioned lieutenant on 5 February 1745, and was promoted commander of the new sloop Merlin 10 on 10 June 1756, serving in the Downs. This vessel was captured by the French privateer Marchault 30 after becoming separated from a convoy in appalling weather off Brest on 19 April 1757, the heavy sea preventing her crew from un-housing the guns in order to resist their larger opponent. In the following year he was given the Scorpion 10, engaged in cruising before going out to North America during February 1759.

Although Cleland was posted captain on 15 May 1759 the news of his elevation did not reach North America before he commanded the Scorpion in the Quebec expedition during June, and his successor, Commander John Jervis, did not join her until September. Later commanding the Squirrel 20, Cleland served on the Mediterranean station and North America until 1762. During the early part of 1763 he had the Montagu 60 prior to her being paid off in June, and he was thereafter unemployed for the next sixteen years.

In February 1779 he commissioned the Arrogant 74 at Portsmouth, and he was attached to the Channel fleet which undertook a retreat before the French / Spanish alliance in August 1779, although his own command proved to be unseaworthy and was sent in for repairs. He thereafter succeeded Captain John Stanton aboard the Formidable 90 in the Channel Fleet in time to serve at the relief of Gibraltar on 16 March 1781, and he retained this vessel through to the end of the year, serving in the Channel fleet campaign of June-November, until when she became the flagship of Admiral Sir George Rodney.

Thereafter Cleland remained unemployed. He became a superannuated admiral in 1787 and died on 24 June 1795.

His wife, Mary Amelia, survived him by two and a half years but sadly two daughters who were the issue of a previous marriage predeceased him. His memorial is in Portsmouth Cathedral.