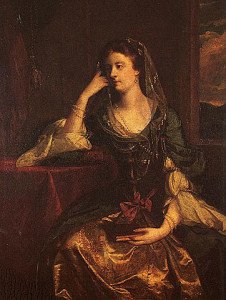 The remarkable Duchess of Leinster, depicted in the 1750’s

1756-1810. Born on 30 June 1756, he was one of nineteen siblings, being the third born but second surviving son of James, 1st Duke of Leinster who died in 1773, and of his wife Lady Emilia Mary Lennox, the daughter of Charles, 2nd Duke of Richmond. This lady, a great-granddaughter of King Charles II by a mistress, earned some notoriety by moving to France the year after her husband’s death and marrying the family tutor, with whom she had four children. More notorious still was Fitzgerald’s younger brother, Lord Edward Fitzgerald, who was a leading United Irishman and died on 4 June 1798 of wounds incurred whilst resisting arrest on a charge of treason. The family was related to Lord James O’Bryen and the Earl of Kildare.

Fitzgerald entered the Navy in 1772 and was commissioned lieutenant on 13 May 1778 as a beneficiary of the King’s review of the fleet at Spithead. Serving aboard the Arethusa 32, Captain Samuel Marshall, he was wounded in the leg in action with the French frigate Belle Poule 32 in operations preceding the Battle of Ushant on 27 July.

In May 1779 he was appointed to the ex-French cutter Tapageur14, which having been manned by Commander George Cranfield Berkeley was ready for service at Plymouth by the end of August, although when she did put to sea it was initially under the command of her first lieutenant, Mr Stowe, as Fitzgerald was still in Ireland. After eventually joining her, Fitzgerald took the Tapageur out to the Leeward Islands with a convoy at the beginning of the following year, having initially sailed from England with Admiral Sir George Rodney’s fleet, but unfortunately his command was ‘wrecked’ whilst warping into the careenage at St. Lucia in March whilst delivering despatches to Rodney.

He was posted captain of the Sphinx 20 on 23 May 1780, remaining in the Leeward Islands before returning to England with a convoy under the orders of Rear-Admiral Hyde Parker and paying her off in September. At the end of that month he was appointed to the Sibyl 28 in which sailed for the Leeward Islands with Rear-Admiral Sir Samuel Hood’s squadron in December. He was present at the capture of St. Eustatius on 3 February 1781, and was sent under the orders of Captain Francis Reynolds in chase of a Dutch convoy that had left the island shortly before the invasion. In April he briefly commanded the Boreas 28 before being succeeded by Captain Henry Savage, and Rodney appointed him to the Centaur 74 on 9 May in succession to Captain Edward Tyrrel Smith.

On 21 September 1781, having evidently left the Centaur which was still in North America, Fitzgerald arrived in the town of Carlow in south-east Ireland and set off for Carton House, the residence of his brother, the Duke of Leinster. In the following month he attended the Irish Parliament, and a visit to England followed before he returned to Dublin at the beginning of December.

In January 1782 it was announced that Fitzgerald was to join the French built frigate Prudente 36 in succession to Captain Hon. William Waldegrave, and he served with Vice-Admiral Hon. Samuel Barrington’s squadron in the Channel fleet, capturing the French East-Indies bound storeship Aigle on 16 February and the Morlaix-based privateer Marquis de Castries 18 off Cape Clear on 25 April after a thirty-six hour chase, this being just days after he had taken four ships out of a French convoy. Whilst returning to St. Helens after her cruise Fitzgerald saw a man fall into the sea from a ship ahead of the Prudente and he jumped out of his cabin window to rescue what proved to be a stricken midshipman. In early August the Prudente arrived in Dublin Bay from Plymouth to collect a hundred and twenty volunteers, and by the end of September she was in the Downs to see service under Commodore John Elliott off Brest. She was then paid off in November.

Fitzgerald joined the French built Prudente 36 in early 1782 and was attached to Vice-Admiral Hon. Samuel Barrington s squadron in the Channel fleet, capturing the storeship Aigle on 16 February and the Marquis de Castries on 25 April. His frigate remained with the Channel fleet for the rest of the year before being paid off in November. 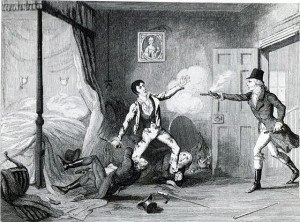 The arrest and fatal wounding of Fitzgerald’s rebellious brother

During the peace from 1783 Fitzgerald was a busy member of the Irish parliament, and at the beginning of April 1786 he arrived at Bath with his ‘suite’, where he remained for a couple of months before returning to Dublin at the end of May. He paid a further visit to Bath in early September, in January 1787 was a guest of the Prince of Wales at his house in Piccadilly, and was soon back in Dublin where he played the part of Douglas in the tragedy of that name at the Countess of Ely’s Theatre to rave if somewhat sycophantic reviews from the Press. In November he was too ill to attend the Duke of Rutland’s funeral in Dublin so instead sent his yacht, decked out in mourning colours, to attend the water procession. At the end of April 1789 he arrived at his seat at Sibyl Hill in Ireland after taking passage from Liverpool, and in the following month was appointed to a Commissionership of Revenue. He had a fortunate escape shortly afterwards when his carriage, having deposited him in Dublin, was intercepted by nine footpads at Ballybough Bridge who were somewhat chagrined to find nothing of value aboard.

During the Spanish Armament in 1790, Fitzgerald sailed for England in July to recommission the Aigle 38 but with the dispute being resolved she was paid off in November and laid up. In August 1791 he attended a dinner given by Vice-Admiral Lord Hood aboard the Victory at Portsmouth and in the following month returned to Dublin with his suite. He was appointed the Muster-Master General of the Army in Ireland in early 1792, at which point he gave up his Revenue position, and in February 1793 he joined the Privy Council.

The opening of the French Revolutionary War saw Fitzgerald recalled to the colours, yet when he did wish to sail for England towards the end of September adverse weather prevented him from doing so. On 15 October he attended a levee with the King at St. James’ Palace, and in December he was honoured with a plum command when appointed to the newly launched Artois 38; however, it was not until the middle of March 1794 that he arrived at Deptford to take her down to Long-Reach for the loading of her guns and powder. In June she conveyed troops to Ostend, and in the second week of July Fitzgerald landed from his frigate at Portland to carry dispatches which had been received out of a homeward-bound West Indiaman to the Admiralty. Whilst on his return journey to rejoin the Artois at Portsmouth he was taken ill between Ripley and Godalming, it being reported that a severe nosebleed had covered his chaise in blood, but after being collected by aides coming up from Portsmouth he soon recovered.

Towards the end of July 1794, it was announced that he was to leave the Artois and take up the command of the dull-sailing Brunswick 74, which had performed with such honour at the Battle of the Glorious First of June under the late Captain John Harvey. Joining her in early September, she was not ready to sail until December when her manning was completed with seamen from the homecoming Alcide 74, Captain Sir Thomas Byard. One of his first duties was to sit on the court-martial which dealt with a mutiny that had occurred at Spithead on the Culloden 74, Captain Thomas Troubridge, on 3 December. In January 1795 he joined Vice-Admiral Sir Hyde Parkers squadron which saw a convoy out to a safe latitude, and in May he sat on another high-profile court martial, that of Captain Anthony Molloy, which investigated that officer’s conduct at the Battle of the Glorious First of June. Continuing to serve in the Channel, the Brunswick participated in Cornwallis’ Retreat on 17 June, and after leaving her shortly afterwards Fitzgerald did not see any further active service.

In October 1795 it was reported that he was to commission the Carnatic 74 at Plymouth, but that command went to Captain Richard Grindall, and similarly a report in February 1796 that he was to command a squadron of four sail of the line and a frigate proved to be erroneous. Instead Fitzgerald was soon back in Dublin to sit in the Irish parliament. He was advanced to flag rank on 14 February 1799, was created the 1st Lord Lecale in the Irish Peerage on 27 December 1800, and was promoted vice-admiral on 23 April 1804. In 1807 he was re-appointed the Muster-Master General in Ireland which position he had previously held in William Pitt’s administration.

Severely in debt, not least because of electoral expenses, Lord Lecale died of dropsy at the residence he had recently sold to his stepfather, Ardglass Castle, County Down, on 17 February 1810. He left no legitimate issue and was interred at Bright Parish Church.

Lecale was married twice, firstly in June 1799 to a wealthy widow, Mrs Smith, and on the second occasion in London on 18 July 1808 to Mrs Julia Carton, the widow of Thomas Carton of Dublin. His only issue was the illegitimate Henry Fitzgerald, who died as a midshipman whilst boarding a French privateer at sea off Civitavecchio on 14 September 1803, and a daughter, Anna Maria Fitzgerald. His seat was at Sybil Hill, Clontarf, and in 1790 he bought and subsequently rebuilt Ardglass Castle in County Down.

He was the M.P. for Kildare County in the Irish Parliament from 1776-90, for Cavan from 1790-98, and for Ardfert from 1798-1801. From January-April 1807 he was the M.P for Arundel in the British Parliament. He did not share the politics of his rebellious brother, nor indeed most of his family, but was steadfast in support of the British administration of Ireland, being rewarded accordingly with his peerage after the Act of Union.

Lecale was evidently an animal lover, for he not only owned racehorses, but in 1785 placed an advertisement in the Irish Newspapers seeking the recovery of a lost dog, a white Fox Dog by the name of Zear.