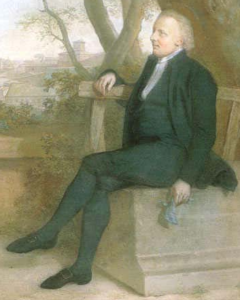 Hervey was the son of the 4th Earl of Bristol, the clergyman Frederick Hervey.

Hervey initially went to sea under the patronage of his uncle, Commodore Lord John Augustus Hervey, the 3rd Earl of Bristol, and with such strong patronage behind him he soon rose through the ranks. He commanded the brig Viper 10 from 1779, and during the autumn was the senior of two naval commanders in the St. Lawrence, although contrary to the wishes of the governor of Quebec he preferred to remain harboured in the city rather than patrol the gulf against American privateers. When she did set sail the Viper was wrecked off Tourelle in the St. Lawrence Estuary on 15 December that year.

Hervey was posted captain of the sloop Daphne 20 on 15 March 1780, and he commanded her through to May of the following year when he commissioned the recaptured frigate Minerva as the Recovery 32 for service in the Channel.

In January 1782 he recommissioned the Raisonnable 64, and he participated in the Channel Fleet s summer campaign from April – August, and also at the relief of Gibraltar on 18 October. Two days later the commander-in-chief, Admiral Lord Howe, challenged Hervey to a duel after the latter had taken exception to some perceived sleight, and had complained that the fleet could have destroyed the Spanish fleet if it had been led as well as it should have followed. Sensibly Hervey apologised and retracted this statement when the two men met on the duelling ground.

The Raisonnable next went out to the Leeward islands with Rear-Admiral Sir Richard Hughes squadron, arriving in December 1782 before returning home in the following year at the peace. Having arrived at Spithead where many ships had displayed mutinous tendencies whilst waiting to be paid off in March, the Raisonnable then received orders to go around to Chatham, but her crew also became mutinous at the further delay in paying them off and threatened to carry the ship into Portsmouth Harbour. Hervey felt obliged to arm his officers so that the ringleaders could be seized and placed in irons, and once the ship arrived at Sheerness seven men were found guilty of mutiny and sentenced to death by a court martial that sat at Chatham on 10 July under the presidency of Captain Sir Hyde Parker.

From 1787-94 Hervey served as the envoy extraordinary and minister plenipotentiary to the Grand Duke of Tuscany. He returned to naval duties in command of the Zealous 74 with the Mediterranean fleet during the winter of 1795, although his wish was for a larger vessel. Before he could engineer a move he died on 10 January 1796.

Hervey married Elizabeth Drummond on 4 October 1779 at Quebec, and was thus the brother-in-law of the future Admiral Sir Adam Drummond. They had issue a daughter, Hon. Elizabeth Catherine Caroline Hervey, who died at the age of 22 in 1803 having married the politician Charles Rose Ellis.

Hervey was described as having a heat and violence , and he appears to have fallen out of favour with his father as well as Lord Howe during the American Revolutionary War. Known as Jack , he was forever in debt. It was reported that he kept a very poor discipline aboard the Zealous when commanding her in the Mediterranean.