1724-1800. He was born the son of Carter Allen and Emma Hay on 19 January 1724, was related to the Marchioness of Salisbury and the Marquis of Downshire, and apparently had a claim to the title of Earl of Erroll. He was the brother-in-law of Admiral Robert Swanton, who died in 1765 having been the commander-in-chief in the Leeward Islands.

Having been educated at Westminster and formed an early friendship with the future Admiral Viscount Keppel, Allen was commissioned lieutenant on 14 June 1745 and saw some service aboard the Gosport 44, Captain Thomas Pye, which returned to England from Nova Scotia in early 1752. 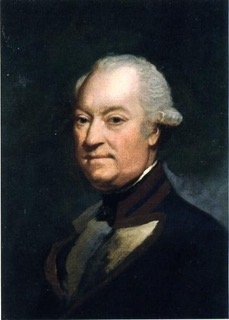 Admiral John Carter Allen – this image has been kindly provided by his descendent, Carlos Amengual Jackson

He was promoted commander of the sloop Grampus 14 on 5 April 1757, and after capturing the French privateers Phillippine on 14 May and the Duc d Aumont 16 in the Bay of Biscay was posted captain to the Experiment 20 on 21 March 1758. This ship was attached to Commodore Hon. Augustus Keppel s squadron that was sent to take Gor e in November that year. From May 1758 until July 1759 he commanded the Sapphire 32 at Deptford on a temporary basis for Captain John Strachan.

In August 1759 Allen commissioned the French prize Repulse 32 and sailed with Captain Hon. John Byron s squadron to destroy the Louisburg fortifications in the following March. Having taken the Bayonne privateer Chevalier de Bavro 20, he then assisted Byron in the destruction of a French squadron of two frigates and a sloop in nearby Chaleur Bay on 8 July. In June 1761 he took a convoy south to the West Indies and he was attached to Commodore Sir James Douglas squadron in the Leeward Islands when it captured Dominica on 8 June. Remaining in the Caribbean, he continued to serve under the newly appointed and more aggressive commander-in-chief, Rear Admiral George Brydges Rodney, and was with that officer s fleet when it successfully attacked Martinique in January 1762. He left this vessel in October of that year and raised the flag of Rear-Admiral Robert Swanton in the Leeward Islands aboard the Vanguard 70, paying her off in March 1764.

In the spring of 1770 he briefly had the command of the Superb 74 at Portsmouth, and shortly afterwards he commissioned the new Ajax 74 for the first time as a guardship. He continued to command her during the dispute between Spain and England over the Falkland Islands, sailing to Ireland and from thence with a troop convoy to Gibraltar before the Ajax was paid off in June 1771.

In November 1775 Allen was appointed to the Albion 74 at Plymouth, being ordered to proceed up the St. George s Channel to seek out three rebel privateers. He then moved to the Egmont 74 in the early part of 1778 and on 27 July fought at the Battle of Ushant, closely seconding Vice-Admiral Sir Hugh Palliser s flagship Formidable 90, and losing twelve men killed and nineteen wounded. Allen subsequently gave evidence in favour of the commander-in-chief, Admiral Hon. Augustus Keppel, at the court-martial brought at Palliser s behest against that officer in January, although in the intrigue prior to the trial he found it necessary to incarcerate the bearer of a 1,000 banknote in a room and threaten him with pistols until the fellow revealed whom the anonymous benefactor was. It turned out that the sponsor was actually a lady admirer who wished to alleviate Allen s fiscal deficit, rather than a representative of Keppel s or Palliser s faction!

He was employed with the Channel fleet during its retreat of August 1779, and at the close of the year he commissioned the ex-Spanish Fenix, renamed the Gibraltar 80, serving in the Channel fleet campaign from June but leaving her before the end of the following year. 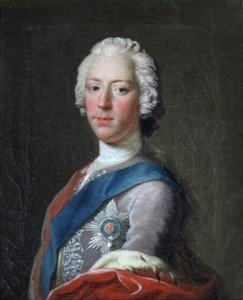 Admiral Allen served his country well – but his family details were both sketchy and outrageous, with his grandsons claiming that their father had been adopted by Admiral Allen at the request of his real father, Bonnie Prince Charlie, pictured here.

In February 1782 he commissioned the Royal William 84, and he sat on the court martial into the loss of the Royal George on 29 August. He was then with Admiral Lord Howe at the relief of Gibraltar on 18 October and led the van at the action off Cape Spartel, losing two men killed and thirteen wounded. The Royal William was paid off in February 1783.

Allen was married three times, but a great deal of confusion attends his family history. His second wife, who he married on 20 Jun 1780, was Caroline Addington, the widow of William Addington. Following her death he married Stella Frances Freeman on 29 June 1799, this lady being a wealthy heiress whose family had owned property in Jamaica. He was the father of Vice-Admiral John Allen, and of Captain Thomas Allen, 1773-1852, and also of a daughter, all three being described as his natural children . Somewhat incredibly the sons of Thomas Allen claimed that their father was in fact the son of Bonnie Prince Charlie, and that he had been adopted by Admiral Allen after being left in his care whilst cruising off Siena. Thomas Allen did not share greatly in Admiral Allen s will, the younger son John being by far the greater beneficiary, and after a short career in the navy Thomas apparently led a somewhat shadowy existence living abroad, particularly in Italy, for many years.

Allen lived in Devonshire Place, Marylebone, politically he was a supporter of the Rockingham Whigs, and he was a friend of Admirals Hon. Samuel Barrington and Lord Hotham.