1756-1842. He was born on 15 March 1756 at Annapolis, Nova Scotia, the second son of Captain William Wolseley of the 47th regiment, and of Anne Cosby of Stradbally Hall in the modern-day County Laois, Ireland, the sister of Admiral Phillips Cosby.

In the mid-1760’s Wolseley took passage to Britain from North America with his mother and siblings abord the Pearl 32, Captain Charles Saxton, and he went to live in Ireland, his father’s homeland, where he was schooled at Kilkenny. In 1769 he joined the cutter Goodwill at Waterford, serving in her for two years with his father’s brother in law, Lieutenant John Buchanan, and then entering the nautical school at Westminster after the vessel was paid off at Sheerness. At the beginning of 1773 he joined the Portland 50, Captain Andrew Barkley, which sailed for Jamaica in March to replace the Princess Amelia 80 as the flagship of Vice-Admiral Sir George Rodney, and he returned to England aboard the latter vessel with Captain Barkley in September.

Almost immediately he departed for the East Indies in September 1773 aboard the Salisbury 50 flying the broad pennant of of Commodore Sir Edward Hughes. This vessel returned to England in May 1778, and on 11 June Wolseley was commissioned lieutenant, becoming the junior on the Duke 90, Captain William Brereton, which was part of Admiral Hon. Augustus Keppel’s fleet at the Battle of Ushant on 27 July.

At the suggestion of the promoted Rear-Admiral Hughes who had been re-appointed to the East Indies command, Wolseley next transferred to the Worcester 64, Captain George Talbot, as she was bound for that station, and after sailing out at the beginning of 1779 he was engaged in actions with pirates in the Indian Ocean and at the destruction in December 1780 of Hyder Ali’s fleet. In October 1781 he commanded a company of the naval brigade during the reduction of Negapatam, and in performing a similar service at the storming of Fort Osnaburg on Trincomale in the following year he was severely wounded in the chest by the slug charge from a gingal, a local breech-loading weapon fired from a stand, with the shot scouring across his chest from right to left. For a whole day he was left unattended, being presumed amongst the twenty-two men dead, before being discovered alive and stretchered back to the Worcester to recuperate. He afterwards transferred to the flagship Superb 74 and fought in Hughes’ first four battles against the Bailli de Suffren off Sadras on 17 February, Providien on 12 April, Negapatam on 6 July, and Trincomale on 3 September.

On 4 September 1782 he was promoted commander of the fireship Combustion 14, but at the same time took temporary command of the Worcester 64, which he carried into the Madras Roads for the fatally wounded Captain Charles Wood. Ten days later, on 14 September following Wood’s death, he was posted captain of the Coventry 28, both of which promotions would be confirmed by the Admiralty on 3 March 1784. In the meantime the Coventry was captured by Suffren’s fleet after Wolseley had mistaken their ships for an East Indiaman convoy in the Ganjam Roads, south of Calcutta in the Bay of Bengal on 10 January 1783, having sailed thither to seek out a privateer which he had been informed had attacked the British East Indiaman Blandford. He was chivalrously treated by Suffren and detained on the islands of Mauritius and then Bourbon for the next eight months before being released at the peace. After returning home via a French transport to St. Helena and an East Indiaman to England, Wolseley and his officers and crew were brought to the statutory court martial at Portsmouth on 16 June 1784 and were honourably acquitted for the loss of the Coventry.

From the autumn of 1785 until arriving back at Portsmouth on 23 January 1789 Wolseley served as the flag-captain aboard the Trusty 50 to his uncle, Commodore Phillips Cosby, the commander-in-chief in the Mediterranean. Upon being paid off he returned to Ireland.

In December 1792 Wolseley recommissioned the thirty-year-old frigate Lowestoffe 32, and in March 1793 was rushed to sea from Plymouth with a small squadron after reports had been received from Alderney that the French might be attempting an invasion of the Channel Islands. He then undertook a brief voyage to Liverpool to collect seamen for the fleet, prior to returning to Portsmouth at the beginning of April via Milford Haven where he had fled to escape poor weather. 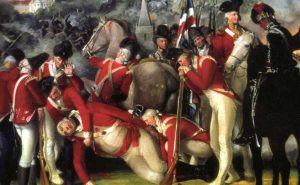 Captain Wolseley led a Protestant Volunteer force at the Battle of Ballynahinch in 1798 whilst beached from the Navy.

In May 1793 the Lowestoffe sailed with Vice-Admiral Lord Hood’s fleet for the Mediterranean which in August occupied Toulon. She was then detached under Commodore Robert Linzee to Corsica where after a few broadsides on 1 October she somewhat surprisingly forced the abandonment of the Martello Tower that was guarding San Fiorenzo; however Linzee’s attack was beaten off and the expedition was abandoned. At the commencement of the Corsican campaign in February 1794, Wolseley again took possession of the tower at the head of a landing party after it had provided a sterner resistance to a naval attack but succumbed to heated shot from the heights. A few days later he was appointed to the French-built frigate Impérieuse 40, which had been captured by the Captain 74, Captain Samuel Reeve, in Spezzia Bay in October 1793, and which he took home at the end of the year in convoy with Vice-Admiral Cosby. After being sent around to Chatham in December to be paid off Wolseley was unsuccessful in being re-appointed to the Impérieuse as he was apparently considered by the Admiralty as being too close to the out of favour Lord Hood.

Wolseley remained unemployed for the next five years, during which time he married and took land near Clough House in County Down, Ireland. See footnote. Whilst continuing to live in Ireland, Wolseley commanded a company of loyalist Protestant volunteers against the United Irishmen at the Battle of Ballynahinch in County Down in June 1798.

From May 1799 he served in the Channel fleet’s Terrible 74, joining Rear-Admiral Sir Charles Cotton’s reinforcements to the Mediterranean following the breakout of the Brest fleet on 25 April. He entered Plymouth in January 1800 from Admiral Sir Alan Gardner’s squadron, in April was anchored with the fleet in Torbay, and he participated in Commodore Sir Edward Pellew’s expedition to Quiberon Bay in June. During September he sailed with five other sail of the line under the orders of Commodore Thomas Graves to reinforce Vice-Admiral Archibald Dickson off Denmark, and once diplomacy had settled the issue with that country he returned home before sailing from Portsmouth at the beginning of November to join the Channel Fleet in Torbay.

In December 1800 Wolseley transferred to the St George 90, which ship was commandeered for the Baltic expedition by Vice-Admiral Lord Nelson in February 1801, whereupon Wolseley, whose wife was reported to be dangerously ill, removed to the San Josef 110. Continuing to serve in the Channel Fleet, his command came into Plymouth in August to briefly refit before rejoining the fleet with bullocks and vegetables a week later. He remained with the San Josef until she was paid off at the peace in the spring of 1802.

On the resumption of hostilities in 1803 Wolseley took command of the sea fencibles on the Shannon, retaining this position until promoted rear-admiral on 23 April 1804, whereupon he held the command of the fencibles for the whole of Ireland until 1805. He was promoted vice-admiral in 25 October 1809, and being unable to secure active employment he took up residence in Bath.

At the time of Napoleon’s escape from Elba and reappearance in southern France during March 1815 Wolseley was in Paris with his wife and two young daughters, and having at first remained in the city in the belief that the ex-emperor’s progress north would be halted they were obliged to flee at short notice. Initially they made for Bruges, and from there to Ghent where Wolseley was introduced to King Louis XVIII, and finally to Ostend. Whilst taking passage aboard a trading vessel to Dover the weather deteriorated to such an extent that Wolseley himself was asked to take command of the vessel and see her safely into Lowestoft.

Returning to Bath, he chaired a New Year’s dinner for the Duke of Clarence in January 1818 given by those admirals, captains and commanders resident in the city. He was promoted admiral on 12 August 1819, and towards the end of 1820 the family paid another visit to Ghent for the benefit of his wife’s health, although sadly she died there in the following year. During 1823 Wolseley and his two daughters visited Ireland, and concluding that the girls would benefit from living closer to their extended family the residence in Bath was sold and another including stables and a coach house was purchased at Rostrevor in County Down. Over the next few years Wolseley would become a leading member of society in the region.

In 1839 Wolseley visited Caen with his daughter’s family, and he remained wintered there until the following April when he re-visited Paris before returning to Britain and taking up residence in London. During 1842 the wound he had received at Fort Osnaburg re-opened and upon examination it was found that pieces of cloth and lead about the size of a small pea were still embedded. Surgical removal took place but the wound failed to heal, and after a slow decline Wolseley died at his residence in Duke Street, Manchester Square, London on 7 June 1842.

Wolseley married Jane Moore of Clough House, County Down, at the end of 1795 and had issue two sons and two daughters. His eldest son, Lieutenant John Hood Wolseley, died at the age of 30 in June 1827.

On 8 October 1796 a duel took place about four miles from Holyhead in Anglesey between a Captain Wolseley and Major William Houghton, in which the latter was slain. Although the captain’s Christian name was not reported there is every likelihood that it was Captain William Wolseley, given that Houghton had pursued his opponent to Ireland where the latter had fled on the advice of his friends, before both had returned to Holyhead on separate packet boats to fight the duel.