c1753-1816. A younger son of Lieutenant Claphamson Essington and of his wife Anne Hill, his grandfather was John Essington, the M.P. for New Romney from 1727-8, who was unseated from Parliament by petition and died in Newgate Prison after being detained for debt.

Essington was commissioned lieutenant on 28 February 1777 and promoted commander on 30 March 1781, in which rank he commissioned the purchased sloop Lisburne 14 at Jamaica and brought her home in the latter part of the year. He then commanded the bomb Vesuvius 8 in the summer of 1782, and was posted captain on 18 January 1783. 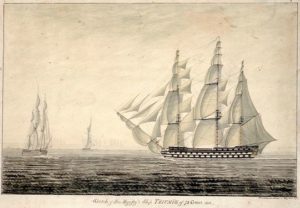 HMS Triumph, commanded by Essington at the Battle of Camperdown in 1797.

Remaining unemployed throughout the peace, he recommissioned the Aurora 28 in September 1793, and having escorted the Cork convoy in the spring of 1794 he captured the French cutter Narcisse 14 off the Shetland Isles on 18 June. On 19 July at Hull he was found guilty in his absence of murder following the death of a whaler he was attempting to press, and during September he took a convoy from Leith to the Downs.

In November 1794 Essington succeeded Captain James Richard Dacres aboard the Sceptre 64, which had recently returned to England from the Jamaican station with a convoy, and for a short while he flew the flag of Vice-Admiral John MacBride in the North Sea.

In March 1795 the Sceptre sailed for St. Helena to collect the homeward-bound East India trade, and learning that the French had invaded the Netherlands Essington hatched a plan with the governor, Robert Brooke, to employ the East India vessels and troops there present, including the garrison of three hundred men, in an expedition to capture the Cape. This rudimentary force had not long been at sea when it fell in with a vessel carrying despatches advising that Vice-Admiral Sir George Keith Elphinstone had been sent to capture the Dutch colony, but at the same time they discovered that a Dutch East Indiaman fleet was on the point of sailing from the Cape, and so Essington and Brooke decided to intercept them. Accordingly, on 14 June, the Sceptre and several of the armed East Indiamen captured seven of the Dutch East Indiamen which they took into St. Helena, the value of these vessels being estimated at 1.5m, or 178m in today s money.

At the beginning of July 1795 the Sceptre set sail from St. Helena for home, and on her voyage home she fell in with the Discovery, Captain George Vancouver, which joined her convoy. She was back in the South Atlantic in 1796 and was present at the surrender of the Dutch squadron in Saldanha Bay on 17 August.

In June 1797 Essington joined the Triumph 74 whose previous captain, Sir Erasmus Gower, had refused to rejoin her after being ejected by his crew at Spithead during the mutiny that had broken out on 16 April. Shortly afterwards Essington and his first lieutenant marched into the waist with swords drawn when the crew threatened to mutiny and prevent the punishment of four offenders. On 11 October 1797 he commanded the Triumph 74 at the Battle of Camperdown, forcing the surrender of the Wassenaar, although this vessel was in turn fired on by a compatriot and coerced into rejoining the battle, only to be taken later by the Russell. During the battle the Triumph suffered greatly, losing twenty-nine men killed and fifty-five wounded, including Essington who was slightly injured in the arm. He retained the command of her until the spring of 1799, serving in the Channel.

In June 1801 he commissioned the Goliath 74, and in the middle of August sailed from Portsmouth to Plymouth before departing for Jamaica in October with the rank of commodore in command of five sail of the line. After going out on a cruise from Jamaica in the early spring of 1802 he exchanged in April with Captain Charles Brisbane into the Sans Pareil 80, the flagship of Rear-Admiral Robert Montagu. This vessel was paid off and laid up after returning to Plymouth after a six-week passage in September.

Taking command of the Dover Sea Fencibles on the renewal of war with France in May 1803, Essington accompanied William Pitt, who was then out of office as the prime minister, onboard a small vessel out of Dover to view the trial of an experimental gun on 12 September. He continued in this role over the winter.

Essington was advanced to flag rank on 23 April 1804, and with his flag on the Minotaur 74, Captain Charles Moore Mansfield, he served on the Lisbon station in 1807. Subsequently he was third-in-command to Admiral Lord Gambier and Vice-Admiral Hon. Henry Stanhope at the surrender of Copenhagen on 7 September, having led the advance squadron up to the city. Sailing for England, he struck his flag aboard the Maida 74, Captain Samuel Hood Linzee, at Portsmouth on 18 November and after returning to London he was presented to the King in December but was not employed thereafter.

In June 1810 it was reported that he would face trial at the next Admiralty Sessions following an application to the attorney-general for the alleged murder of the whaler in Hull in 1794, but it does not appear that the trial ever took place.

He married Mary Bowlker on 6 April 1799 at the Church of St. Marylebone but did not have any children. His widow died in Birmingham in 1827.

Port Essington, an inlet in Australia s Northern Territory, was named after him by the future Admiral Phillip Parker King.