On 3 November, as the sailing season in North American waters drew to an end with the onset of winter, the French Toulon fleet of twelve sail of the line under the command of Vice-Admiral Jean Baptiste Charles Henri Hector, the Comte d’Estaing departed Boston for the West Indies, having been re-provisioned with captures made by American privateers. On the same day a British troop convoy of some sixty vessels carrying five thousand men commanded by Major-General James Grant, escorted by two 64-gun ships, three of 50 guns, and three frigates under the command of Commodore William Hotham, left Staten Island for the Leeward Islands station. Here Rear-Admiral Hon. Samuel Barrington commanded with two sail of the line, the Prince of Wales 74 and the Boyne 70. 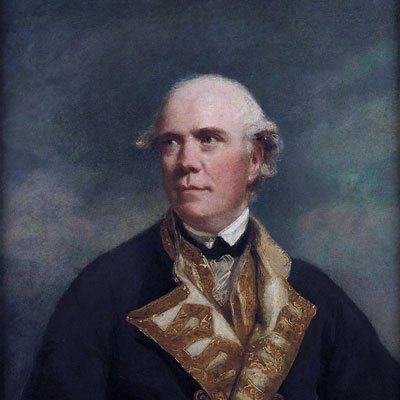 On 25 November one vessel of the British convoy parted company in a violent storm and was captured by d’Estaing. Realising that a substantial British force was sailing south, the French admiral decided to make for Antigua to intercept it, but he remained there for just two days before departing for the island of Martinique, which he reached on 9 December. In fact, Hotham was not bound for Antigua but instead was making for Carlisle Bay, Barbados, and he joined Barrington there on 10 December with the remaining fifty-nine transports. His arrival was expected, as the frigate Venus had sailed ahead and brought news of the approaching reinforcement to Barrington on 24 November.

Keeping the troops aboard the transports and displaying admirable logistical skill, Barrington and Hotham were underway two days later, on 12 December, and sailing to attack the French island of St. Lucia, some seventy miles away. An advance squadron consisting of the Ariadne 20, Captain Thomas Pringle, Ceres 18, Commander James Richard Dacres, Snake 12, Commander Billy Douglas, and the armed vessels Pelican 14 and Barbadoes 14 was sent to guard the approaches in order to prevent news of the expedition reaching the island, and once the fleet arrived these vessels would be stationed along the coast. Two of the three frigates that had sailed south with Hotham’s force, the Carysfort and Diamond, had by now been detached.

Barrington’s fleet reached the Grande Cul-de-Sac in the early hours of the 13th and that morning disembarked more than half of the troops into their flat-boats preparatory to going ashore. Commodore Hotham, by now an expert in such operations, superintended the landings of the troops, being assisted by Captains Richard Braithwaite, Richard Onslow, and Walter Griffith. Meanwhile a French battery consisting of four twelve-pounder cannon that had been annoying the invaders was silenced by the Venus. After landing the remainder of the troops the next morning the army quickly progressed their assault in the face of French regulars and the island’s militia, taking Carenage Bay and driving the defenders into the jungle.

Inevitably word had by now reached Martinique that an attack on St. Lucia was underway, the intelligence being provided by an American privateer. Abandoning a planned attack on Barbados, d’Estaing embarked a substantial troop force of some nine thousand men that had been provided by the governor of Martinique, François Claude Amour, Marquis de Bouillé, and set off for St. Lucia to arrive just before the sun went down on 14 December. Preceding d’Estaing was the Ariadne with signals aloft announcing that an enemy fleet was in sight. The French arrival occurred as the British troops under Grant were completing their easy capture of the island, and it threatened to swing the contest back in their favour. Yet although d’Estaing enjoyed a superiority in ships and apparently in all other respects, he forwent the obvious opportunity of attacking the British before they could make their defensive dispositions, and instead he disdainfully anchored offshore to await the morning.

Barrington was not a man to waste the extra hours awarded him. His original plan had been to harbour the transports in Carenage Bay, but with d’Estaing’s arrival this was no longer possible. During the night he warped the fifty-odd transports into the anchorage of the Grande Cul-de-Sac whilst his men-of-war formed a line-of-battle across the entrance to the bay. The Isis 50 and the frigates were placed at the northern, windward, extremity and his flagship Prince of Wales 74 at the exposed leeward, southern, flank, the positions in between being filled by the St. Albans 64, Boyne 70, Nonsuch 64, Centurion 50 and Preston 50. Batteries were erected on the shoreline and hills to further bolster the defence, and these dispositions were completed by 11 a.m. on the 15th.

d’Estaing’s first approach was made with his flagship Languedoc leading the line, and with his intention being to enter Carenage Bay and land his troops. However, the British army had already erected a battery at the entrance to the bay and when this opened fire it scored a direct hit on the Languedoc, bringing about both a full if harmless broadside in response, together with an immediate retreat. After milling about in some apparent confusion, ten French sail of the line were then sent in to attack Barrington’s position at 11.30, but this force was met with such a devastating salvo that it promptly withdrew.

d’Estaing tried again with a more sustained attack at four o’clock in the afternoon, and this time all twelve sail of the line concentrated on the northern end of the defence led by the Prince of Wales. The British met the assault with a tremendous level of resistance, their ships and the batteries ashore maintaining a rapid and accurate fire. The defence was typified by the wounded Captain Herbert Sawyer of the Boyne 70, who refused to leave the deck and took to a chair to direct his ship’s fire. Had d’Estaing entered the bay and placed each of his ships yardarm to yardarm with Barrington’s, as suggested by Captain Pierre André Suffren, then he might have fared better. As it was the anchored British, who only lost two men killed aboard the Prince of Wales and one on the Ariadne, easily countered his tactics of engaging in line ahead, and after a more prolonged attack the French were obliged to disengage and retire with substantially heavier casualties.

Next day d’Estaing, displaying his credentials as an ex-army officer, sailed around to Gros Islet Bay, some six miles north of the British fleet, and during the evening hours landed seven thousand troops. He then personally led them ashore in an attempt to storm the British lines on the heights but was met with a bold defence by the British soldiers under Brigadier-General Sir William Meadows. The French were soon forced to withdraw with nearly one thousand casualties, an outcome that left the previously confident d’Estaing somewhat devastated.

A further attack on Barrington, who by now had strengthened his own position and placed more batteries ashore, was out of the question, and learning of the imminent arrival of Vice-Admiral Byron, d’Estaing retired to Martinique on the 29th. His single success had been the capture of the sloop Ceres 18, Commander James Richard Dacres, by the frigate Iphigénie 32, although the former’s resistance had allowed a convoy under her charge to escape the French. Conversely d’Estaing had suffered the ridicule of seeing a becalmed American privateer, the Bunker’s Hill 18, captured from under his nose by the boats of the British fleet on 23 December, this vessel being bought into the navy with the command being given to the Prince of Wales’ first lieutenant, James Brine.

For Barrington and Grant, the operations at St. Lucia represented both a textbook invasion and a brilliant defence, and the deserved praise of their contemporaries was embellished by the fact that their efforts had won the British an excellent anchorage in Gros Islet Bay, just thirty miles from the French base at Martinique. That they might be able to make good use of it had been confirmed on 13 December when the Pearl 32, Captain John Linzee, had arrived at Barbados with news that Vice-Admiral Hon. John Byron’s fleet was sailing south, and indeed when the famous explorer joined Barrington on 7 January 1779 it meant that the combined British fleet now held a significant ascendency over the French in the region.