The year opened with such bitter January weather that the Brest Fleet of thirty-five ships under the command of Vice-Admiral Louis Thomas Villaret-Joyeuse was scattered shortly after putting to sea, with three vessels subsequently foundering and one being beached. On 3 January Captain Sir William Sidney Smith boldly penetrated the Brest Roads in order to ascertain the state of the enemy fleet, but by the time Admiral Lord Howe could get the Channel Fleet to sea the surviving French vessels had found a safe harbour. Such was the shortage of food in Brest that six sail of the line soon had to be spirited away to Toulon, and in May Rear-Admiral Jean Gaspar Vence put to sea with three sail of the line and half a dozen frigates to bring home another convoy. A squadron under the command of Vice-Admiral Hon. William Cornwallis intercepted this convoy and took several prizes, but on 17 June it fell in with Villaret-Joyeuse’s fleet off Brittany, and only escaped capture by performing a celebrated retreat. Six days later, on 23 June, Villaret-Joyeuse was intercepted by Admiral Lord Bridport, who had been covering Commodore Sir John Borlase Warren’s landing of a royalist army in France, and who was now commanding the Channel Fleet during Lord Howe convalescence ashore. In the largely indecisive action that ensued, known as the Battle of Groix, three prizes were taken by the British, but the threat of the Brest Fleet was not extinguished. 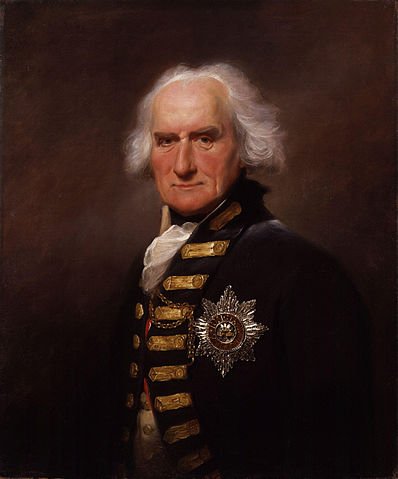 In the Mediterranean, the fleet was in a poor state of repair and barely able to protect the British trade. Vice-Admiral William Hotham engaged the Toulon Fleet off Genoa on 13/14 March and off the Hyères Islands on 13 July but failed to force a conclusive battle on either occasion. He then allowed flying squadrons under Rear-Admiral Joseph De Richery and Commodore Honoré Joseph Antoine Ganteaume to escape from Toulon in September without bringing either to account. On 7 October Richery re-took the Censeur 74, which had been captured in the earlier Battle of Genoa, and in the same action he caused a run in the City of London with his capture of the Levantine convoy. On 29 November Hotham was relieved by the more forceful Admiral Sir John Jervis, but such was the new French confidence, bolstered by the neutralisation of Spain which had dropped out of the alliance in July, that they were able to release more ships to escort their European bound convoys home. Other consequences of the British failure to control the Mediterranean were the loss of Corsica as a base, the withdrawal from that sea in the following year, and the victorious campaigns of General Napoleon Buonaparte in both Italy and Egypt.

In the Netherlands, the French occupied Amsterdam on 20 January, and a cavalry charge across the frozen Texel resulted in their capture of the Dutch fleet. Admiral Adam Duncan commanded a British / Russian force to keep watch on the Dutch, who as the newly formed Batavian Republic declared war on 15 May. As a consequence, their ships in Plymouth were impounded, a homeward-bound Dutch East India fleet was intercepted in the southern Atlantic on 14 June, and their possessions abroad were attacked. Of prime importance, the Cape of Good Hope was taken on 16 September by an expedition led by Vice-Admiral Sir George Keith Elphinstone and the Army. In the East Indies Rear-Admiral Peter Rainier organised the capture of Malacca on 17 August and Trincomale on 26 August, and by the end of 1795 all the Dutch Indian possessions bar the Moluccan Islands were in British hands, whilst the only French presence in the Indian Ocean was at the Ile de France and Reunion.

In the West Indies the fervent French Republican governor of Guadeloupe, Jean-Baptiste Victor Hugues, was reinforced from Brest in January, and with the Leeward Islands fleet proving to be ineffective under the uninspiring leadership of Vice-Admiral Benjamin Caldwell, he was able to support a number of Negro revolts aimed at destabilising the British. On 19 June he re-took St. Lucia, and he then proceeded to spread the revolution to Dominica, St. Vincent, and Grenada. A combined British force which set out from Portsmouth to placate the islands on 18 November, was badly damaged by major storms in the Channel and had to return to Portsmouth twice. Meanwhile the British maintained a foothold on Saint Domingue, although they could no longer count on the support of their Spanish allies who, under the terms of their peace treaty with France, surrendered their portion of the island to the new republic during the year.

In addition to Spain’s withdrawal, Prussia dropped out of the alliance at the end of April, signing a treaty to further their own aims of seeking territory in the east, whilst the other German states made peace with France in May. Only Austria, Naples, and Piedmont remained in the alliance as 1795 drew to a close. Towards the end of the year the French abolished their naval officer corps and re-appointed only those officers who were deemed capable and politically sound. These included the effective Vice-Admiral Laurent Jean Franois Truguet at the Ministry of Marine, who brought years of experience to his job, and soon began building up the French fleet.

In single ships actions the brilliant but troubled Captain Robert Faulknor lost his life when his frigate Blanche captured the French frigate Pique over 4/5 January. The French Minerve 40 was taken by two smaller British frigates after they had put her consort to flight on 24 June, and in other frigate actions the Lively took the Tourterelle on 13 March, despite being assailed by red-hot shot, and the Astraea took the Gloire on 10 April.

Elsewhere a fire at Spithead destroyed Vice-Admiral Sir John Jervis’s flagship Boyne on 1 May. In July the career of Commander James Walker was temporarily made forfeit in an attempt to keep the Spanish in the alliance, whilst on 19 October the controversial Captain William Bligh diplomatically negotiated a peaceful conclusion to a mutiny on another officer’s vessel. Captain Thomas Affleck was consigned to the beach following the loss of the frigate Amethyst on 29 December, and amongst the Navy’s more curious duties was the collection of Princess Caroline of Brunswick from the Continent in March for her marriage to the Prince of Wales.