33-year-old Captain Thomas Affleck came from a prominent naval family, being the nephew of two admirals and the first cousin of two late captains. Sadly, his career was not to end in the glory that attended his relatives, but rather in infamy for the loss of his command.

Affleck had been appointed to the frigate Perle 36 in February 1795 after returning that month from the West Indies, where he had been posted captain in the previous June. His new command had begun life as the French frigate Perle in 1790 before being seized by the British forces at the evacuation of Toulon in December 1793. Throughout the summer of 1795 she had been fitting out at Portsmouth, a task which was completed in September, whereupon she was renamed the Amethyst.

On the afternoon of Monday 28 December, the Amethyst sailed from Torbay under the orders of Captain John Osborn of the Trusty 50, with both vessels being sent to cruise in the Channel. Unfortunately, in the early evening she lost sight of her commodore during a heavy winter storm. Taking to his cot, Affleck left his officers with what were later described as ‘vague’ orders but were ostensibly that the Amethyst should retain her course until 4 a.m. the next morning, at which time she should wear ship to avoid running on to the island of Guernsey. 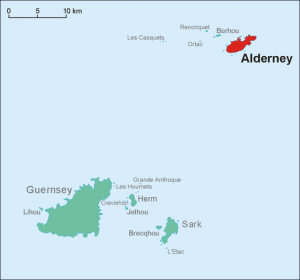 During the night Affleck was apparently informed that warning signals had been heard, but still the Amethyst remained on her course. At 4 a.m. on the morning of the 29th, whilst the officers on deck were in the act of wearing ship as per the captain’s earlier instructions, a lookout spotted a rock on the lee bow and cried out a warning. Affleck rushed upon deck, but before he could take evasive action the frigate drove on to the Hannouaux Reef to the west of Guernsey with such force that several men were thrown out of their hammocks.

Reasoning from the force of the impact that the Amethyst must have been severely damaged, Affleck decided to return to England, but within minutes the carpenter was standing before him with a report that she was taking on ‘torrents’ of water, and that her well was flooded. Those men not already detailed to the pumps were set to baling out the ship by hand, whilst others launched her cannons into the sea and cut away her anchors in an effort to lighten her. Several attempts were made to fother a sail over the leak but these proved to be ineffective, and as it was now apparent that she would not survive the voyage back to England she was put before the south-westerly wind.

Soon the water was swilling up to the gun port sills, and at 7.30 a.m. the carpenter reported that the frigate could only remain afloat for another two hours. Fortunately, there was a skilful pilot on board who was able to use those two hours to steer her through a narrow passage between the Les Casquets reef and the island of Alderney, and at 9.15, he was able to beach her in the surf at high tide in the Bay of Braye.

A sheet anchor was thrown out to hold the frigate fast, but still the sea broke over her, filling her entirely, and so to ease her predicament her masts were cut away. The people on Alderney did all they could to rescue the crew, carrying lines out to her, but unfortunately a local boat which did manage to get under her quarter overset with the loss of two men, although the remaining four were saved by a human chain through the raging surf. Nevertheless, her situation eased as the tide ebbed, the crew were mustered on the quarterdeck, and by 3 p.m. they were able to get ashore with all their possessions. The majority of her stores were also brought off.

Affleck briefly remained on Alderney in the vain hope of getting the Amethyst off, but on 1 January 1796 he arrived at the Admiralty to deliver the news of the loss of his ship. His men remained on Alderney where they revelled in the availability of drink, and apparently as many as eighty-seven had taken the opportunity to desert by 15 February.

On 8 March 1796 aboard the Orion 74 in Portsmouth Harbour, Captain Affleck and his officers and crew faced a court martial into the loss of their frigate. The verdict damned the commanding officer alone, stating that the Amethyst’s loss had been caused by her striking a rock off Guernsey and being holed through his misconduct. His punishment was most severe, being placed at the bottom of the Captain’s List and rendered incapable of ever serving in the Navy again. The officers and men were all absolved of any blame.

As a point of interest, one of the Amethyst’s officers was the surgeon, William Beatty, who was to tend Vice-Admiral Lord Nelson in the last hours of his life at the Battle of Trafalgar in 1805.