Following the French subjugation of the Netherlands, but prior to the new Batavian Republic’s declaration of war against Britain, Rear-Admiral Sir George Keith Elphinstone was summoned from his position as a subordinate admiral in the Channel Fleet to attend the Admiralty. Here he was directed to take up the post of commander-in-chief in East Indian waters, with instructions to seize the Dutch possessions in that part of the World. Included in his orders were a requirement to capture the Cape of Good Hope from the Dutch on his voyage out to his station, the occupation of which colony was a necessity if the East India trade was to be protected from any possible Franco-Dutch alliance. The fact that the Prince of Orange had fled to England was held to be a positive factor in considering the likely reaction of the Cape colonists to the British demand for their submission.

On the morning of 3 April, Elphinstone sailed from St. Helens with his rear-admiral’s flag aboard the Monarch 74 in company with the 74-gunners Victorious and Arrogant, the sloops Sphinx and Rattlesnake, and an Indiaman, the Arniston. Nine days later the squadron anchored off Santa Cruz, Tenerife, where it remained but for twenty-four hours to take on supplies. Sailing thereafter for the southern Atlantic, on 10 June Elphinstone’s ships reached the Cape to make a rendezvous with Commodore John Blankett in the America 64, who had with him the Stately 64 and five hundred troops under Major-General Sir James Henry Craig, this force having endured a sixteen-week passage from Falmouth which had seen them becalmed just north of the equator for a month. Two days later, the combined force sought shelter from the winter storms in Simon’s Bay, to the south of Cape Town. 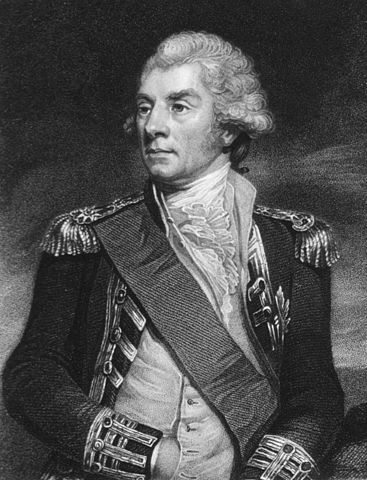 Negotiations now commenced with the Dutch authorities for the peaceful handover of the colony and the establishment of an alliance against the French Republic; however, the local governor, Abraham Josias Sluysken, who had three thousand six hundred Dutch, Boer, and native troops at his disposal, refused the terms outright. Learning that the governor intended to evacuate Simon’s Town and then destroy it, Elphinstone and Craig landed eight hundred troops and marines before the plan could be put into operation, and this force occupied the town on 14 July. The British were soon subjected to frequent and accurate fire from the surrounding hills, but they refrained from retaliating out of a desire by Elphinstone and Craig not to commit to outright hostilities.

Half-hearted negotiations with the Dutch continued, whilst contending parties in Cape Town argued over the authority of the Prince of Orange and debated whether Elphinstone’s expedition was nothing more than a smokescreen for the British to claim their colony for King George. Meanwhile, the Dutch forces mounted successful lightning attacks from their entrenched camp to the north at Muijzenberg on the road to Cape Town. Comprehending the improbability of defeating the colonists with their current resources, Elphinstone and Craig decided that reinforcements were required. Fortunately, these were readily available, for Major-General Alured Clarke had sailed from Spithead with four regiments on 24 May under orders to assume the role of commander-in-chief of the Madras Army, and he had been instructed to pause at San Salvador in Brazil in case his troops would be required to supplement the attack on the Cape. Accordingly, Elphinstone dispatched the Sphinx to San Salvador to summon Clarke.

Whilst they waited, the British situation ashore continued to deteriorate, and soon Elphinstone and Craig concluded that they had no option but to attempt the removal of the Dutch from their position at Muijzenberg. As the camp enjoyed the protection of a steep mountain on one side and shallow waters and a beach with high surf on the other, and given that the Army did not have any artillery to support an attack, this was going to be no easy task. To assist Craig’s troops, Elphinstone landed two battalions of seamen under Commanders Temple Hardy of the Echo and John William Spranger of the Rattlesnake, and to provide covering fire from the shallow waters he fitted out the gun-boat Squib under the command of a 14-year-old midshipman from the Monarch, Charles Adam, and furnished the squadron’s launches with carronades.

On the morning of 7 August, with the benefit of a north-westerly breeze, and with the gunboat and launches patrolling inshore some five hundred yards ahead of the advancing troops, Commodore Blankett ordered the America, Stately, Echo and Rattlesnake to get under weigh. Their initial target was a forward battery, and once they were in position at 1 p.m. Blankett’s ships were able to drive the Dutch from this post, although the enemy withdrawal was so well ordered that they were able to remove all their artillery bar two 24-pounder guns. Eschewing the high seas, the Echo, which was under the temporary command of Lieutenant Andrew Todd from the Monarch, then led the ships further into the bay towards the Dutch camp, and she anchored in two and a half fathoms to be followed at a greater depth by the America, Stately and Rattlesnake, the latter of which was under the temporary command of Lieutenant Edward Ramage. The two sloops then began exchanging fire with the enemy works, with the Echo’s fire being particularly admired, whilst the two sail of the line warped in under an increasing wind to join the cannonade on the Dutch works. Their fire soon forced the Dutch to withdraw, on this occasion with only two field pieces, and by 4 p.m. Craig was able to take possession of the camp. During the naval operation, which was managed by Blankett with Elphinstone in attendance, the America lost two men killed and four wounded when a gun was struck by an enemy shot, and the Stately suffered one man wounded. Elphinstone’s dispatch dated 18 August reporting the attack, and also announcing the seizure of five Dutch East Indiamen in Simon’s Bay, would eventually be received in London by Henry Dundas, one of the secretaries of state, on 21 October.

Nevertheless, although the Dutch had been forced to retire further north to a position at Wynberg, the success of the expedition remained in the balance A counterattack by the colonists on 8 August with their whole force from Cape Town, together with eight fieldpieces, was repulsed under the direction of Lieutenant Francis Holmes Coffin of the Rattlesnake using the artillery which had been abandoned by their enemy the day before. During the skirmishes that followed, Commander Hardy’s brigade of seamen distinguished itself for its calmness under fire.

On 9 August the Arniston brought in three hundred and fifty troop reinforcements, together with artillery pieces, which had been dispatched by Governor Robert Brooke at St. Helena, but getting the stores and ammunition ashore proved troublesome due to poor weather conditions, and without them the British troops could not advance. Craig did attempt a night attack on the 27th, but this failed due to the poor state of the roads and timidity of the guides, and when the Dutch attacked the British camp from the adjacent hills on 1 September it was only with great difficulty that they were repulsed. The next day Elphinstone and Craig conferred, and they decided that if Clarke did not appear within the week, they would have little option but to attempt another attack, extremely hazardous though that would be. Fortunately, and although Elphinstone and Craig were not to know it, Clarke was already on his way with his troops aboard fourteen vessels after receiving the Sphinx’s summons at San Salvador on 25 July. Less happily, the sloop was not in company, for having met with an accident at sea she had been forced to return to the Brazilian port for repairs.

In the early hours of 3 September, the Dutch moved forward in force with sixteen artillery pieces to attack Craig’s camp, and it now seemed to all that a decisive battle was inevitable. But just as the colonist forces began appearing in view in large numbers, a signal was received announcing the arrival of Clarke’s transports in False Bay and the Dutch broke off their bold advance. On the next day the ships entered Simon’s Bay where Clarke and Elphinstone conferred, and it was decided to land the troops as quickly as possible to supplement Craig’s assorted nineteen hundred troops at Muijzenberg. Again, the weather delayed the British from getting all the guns, ammunition, and stores ashore, but finally on the morning of 14 September they marched from Muijzenberg to attack the colonists at Wynberg. Concurrently, the America, Echo, Rattlesnake, and an East Indiaman, the Bombay Castle, sailed into Table Bay under Commodore Blankett’s orders to further alarm the enemy. Realising that the game was up, the Dutch sent out a flag of truce at 11 p.m. requesting a forty-eight-hour ceasefire. In return, Clarke agreed to a mere twenty-four-hour cessation and so on 16 September Cape Town formally capitulated.

Elphinstone now proceeded with the Monarch to join Blankett in Table Bay where two Dutch East India Company vessels had been captured, these being the ship Castor and armed brig Star. The latter vessel was bought into the navy as the brig Hope 14, although it appears that she never left the Cape. As a reward for his service, the deserving Captain Hardy, who was the eldest son of the late commander-in-chief of the Grand Fleet in the American Revolutionary War, Admiral Sir Charles Hardy, was appointed to the Princess, which had been the Dutch 26-gun vessel Wilhelmstadt and Boetzlaar, and which was one of the vessels that had been taken in Simon’s Bay,

Dispatches dated 21 September announcing the conquest were received by Secretary of State Dundas on 23 November, having been delivered by the packet Orpheus, and that afternoon the Park and Tower guns were fired in celebration. Meanwhile, Elphinstone, who by now was aware of his promotion to vice-admiral on 10 June, had departed the Cape to undertake the second part of his orders, which were to attack the Dutch possessions in the East Indies; however, by the time he reached Madras he found that Rear-Admiral Peter Rainier had already completed his task for him. Instead, with intelligence reaching him that a Dutch expedition had been sent from Europe to recapture the Cape, Elphinstone immediately returned to the latter colony in order to defend it.

Rear-Admiral Elphinstone’s squadron –ships marked * sailed with him from Spithead: