The command of the new eighteen-pounder frigate Lively 32 was one that was coveted by many officers, and it was to the good fortune of Commander George Burlton that he was able to hold it in an acting capacity for Captain Lord Garlies when that nobleman was stranded by snow in Scotland whilst undertaking his duties as the High Sheriff of the County of Kirkcudbright in the early months of 1795.

Putting out from Spithead on 27 February under the orders of Captain Charles Stirling of the Jason 38, the Lively parted company two days later in heavy weather which had torn in from the south south-east, leaving Burlton to make the best of his way to the designated cruising ground alone. Here he was soon in business, for in the late hours of 2 March he picked up his first major prize of what was to prove a profitable month when he took the French corvette Espion 18, Captain Jean Jacques Magendie, following a two-hour action off Brest. The prize was all the sweeter given that it was only eight months previously that as the British sloop Espion 16 under Commander William Hugh Kittoe, she had been captured by the French frigate Tamise 32 off the Scilly Isles.

Burlton immediately made for Plymouth to land his prisoners, from where he wrote to inform the Admiralty on 4 March of the capture. The Lively put back to sea on the evening of 7 March and soon enjoyed more fortune, for within twenty-four hours, some twenty miles west of Ushant, she boarded the small vessel Favonius, which was en route to France in convoy, having been captured from the British whilst bound from Archangel to London the previous June, only to be left ice-bound with other prizes at North Bergen over the winter. The next day, 9 March, Burlton’s temporary command recaptured the Halifax-owned brig Joseph, which had been seized by a French frigate the day before whilst in passage to London, and she towed this vessel into Plymouth on 11 March. 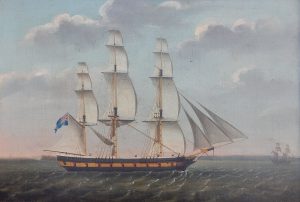 Commander Burlton’s first capture in acting command of the Lively was the corvette Espion, here depicted in her later career under British colours.

By 13 March the Lively was back at sea once more, and at 7 a.m., some forty miles north-east of Ushant, she found herself on the same tack as three French vessels which were sailing for their home coast on a weak northerly breeze. Two would prove to be prizes of the Espion, whilst the third was the frigate Tourterelle 28, Captain Guillaume Montalan. Initially, the man-of-war displayed no inclination to investigate the solitary stranger, but then she apparently had second thoughts and tacked towards the British frigate.

The Lively had only been launched five months previously at Northam in Devon, and it had been no surprise that such a fine new frigate had been allocated to the influential Lord Garlies. She carried an armament of twenty-six 18-pounder cannons on her gun deck in addition to six- 6-pounder cannons and six 24-pounder carronades on her quarterdeck and forecastle, giving her a broadside weight of metal of three hundred and twenty-four pounds. Her crew numbered two hundred and fifty-one men, and her temporary captain, George Burlton, had been a lieutenant for a long seventeen years before being promoted master and commander in acknowledgement of his role as the first lieutenant of Rear-Admiral Thomas Pasley’s flagship Bellerophon 74 at the Battle of the Glorious First of June in 1794.

The Lively’s immediate opponent, the Tourterelle, was also in her first year of service. She was armed with thirty cannon and reportedly offered a broadside weight of metal of one hundred and eighty-eight pounds. Her crew numbered two hundred and thirty men, and she was returning to port after a two-week cruise off the south-west coast of England during which she had taken several prizes. At five hundred and eighty-one tons she was a much smaller vessel than her British opponent, which weighed in at eight hundred and six tons.

It appears that the Tourterelle had mistaken the Lively for what the French would describe as a corvette, and this erroneous identification persuaded Captain Montalan to lie-too under topsails and await the stranger’s approach. Only upon realising his blunder did he seek to tack in the hope of escaping, but unfortunately the lack of wind inhibited this manoeuvre, and he was left with no other option but to accept an engagement.

Little is recorded of the resulting engagement, other than having closed to within range on opposite tacks the two vessels began firing at 10.30 a.m. Once she had passed the Lively’s stern the Tourterelle wore, but then Burlton managed to pin her alongside and the two frigates maintained a close action until 1.30. By that time the vastly inferior French vessel had lost all her topmasts, was significantly disabled in her lower masts, and was badly holed in the hull. She had lost sixteen men killed and twenty-five wounded, and had only eight cannons still in action with but five men to man each of them. Her situation left Captain Montalan with little alternative but to surrender, and shortly after striking the colours the Tourterelle’s mainmast also went by the board. Nevertheless, her defence had proved a most valiant one and her talented captain in due course would be rightly absolved of any blame for her loss when brought before a military council to account for it.

The Lively suffered two men wounded in the engagement, including her third lieutenant, Loftus Otway Bland, whose left eye was badly damaged after a misfiring cannon he was in the process of re-priming had gone off. The frigate itself had sustained burns to her sails and rigging, leading to the suspicion that the French had been firing red-hot shot, and upon going aboard the Tourterelle a boarding party discovered that a furnace had indeed been in use, but that it had been thrown overboard shortly before the French frigate’s surrender. It would later be claimed by British prisoners aboard the Tourterelle that her surrender had been delayed for up to an hour whilst attempts had been made to remove all evidence of the furnace.

The Lively’s success was embellished by the recovery of the Espion’s prizes, and she returned to Plymouth with the Tourterelle on 14 March where the latter was bought into the Navy as a twenty-eight-gun frigate. Disappointingly, she only served for four years in this capacity before being converted into a troop ship, and her career ended in ignominy when she was sunk as a breakwater at Bermuda in 1816. As for the Lively, she was present at the Battle of Cape St. Vincent on 14 February 1797, but after grounding near Rota Point, Cadiz, under the command of Captain James Nicoll Morris she was set alight and destroyed by her crew under Spanish fire on 13 April 1798. The Espion was bought back into the Navy as the Spy but her career was not of an eventful nature and she was sold off at Plymouth in 1801.

In his dispatch to the Admiralty, Commander Burlton recommended lieutenants Joseph Watson and John Maitland to Their Lordships’ attention. The former, the son of Captain Thomas Watson who had died in the Leeward Islands when commanding the Conqueror 74 in action against the French fleet on 19 May 1780, was promoted commander with seniority from 16 March and was posted captain in March 1798; the latter, a nephew of Captain Hon. Frederick Lewis Maitland, was promoted commander in December 1796, posted captain with seniority from August 1797, and would eventually rise to flag-rank. Lieutenant Bland was promoted commander in August 1797, achieved post rank in September 1798, and enjoyed a most active and enterprising career before his early death at the age of 39 in 1810. As for Burlton, he was swiftly posted captain at the urging of a ‘Committee of Gentlemen from Lloyd’s Coffee House’ who also raised two hundred guineas for his purchase of a piece of plate, and after a similarly active career he too died relatively young in 1815, having just achieved flag rank.