1768-1834. He was born on 24 March 1768, the second but eldest surviving of eight sons of John, 7th Earl of Galloway, by his second wife Anne Dashwood, sister to the Duchess of Manchester. He was the nephew of Admiral Hon. Keith Stewart, and the brother of Lieutenant-General Hon. William Stewart and of Lieutenant-Colonel Hon. James Henry Keith Stewart. Four of his younger brothers served at various times as members of the House of Commons.

Garlies was educated at Westminster School before he entered the Navy in March 1780, serving under his uncle, Commodore Hon. Keith Stewart, aboard the Berwick 74 at the Battle of the Doggersbank on 5 August 1781, and aboard the Cambridge 80 at the relief of Gibraltar on 18 October 1782.

He was commissioned lieutenant on 8 August 1789, and having served in the Mediterranean aboard the frigate Aquilon 32, Captain Robert Montagu, he left for home in April 1790 aboard a Smyrnian trader. In August he was elected to Parliament as the M.P. for Saltash, and at the same time he found a position as a junior lieutenant aboard the Queen Charlotte 100, Captain Sir Roger Curtis, flying the flag of Admiral Lord Howe during the Spanish Armament.

On 19 November 1790 he was promoted commander to the Scourge 16, which was fitting out at Sheerness, but as he found time to travel to France during December whilst the vessel remained in dock it is not clear that he ever took her to sea. He transferred in April 1791 to the bomb Vesuvius 8 which was fitting out at Deptford, and which he sailed down to the Nore in June after taking on board her mortars and shells. On 2 July she arrived at Portsmouth to join the Grand Fleet, but with the Russian Armament ending she was back at Deal on 24 August, prior to sailing on to Blackstakes to be disarmed and paid off. 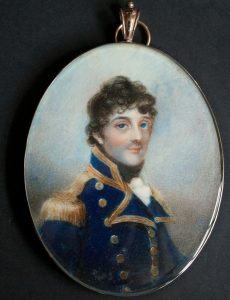 Garlies had hoped to use his parliamentary connections to obtain an advancement in the Navy, but as an interview with prime minister William Pitt in October 1791 proved fruitless he decided to travel abroad, taking the opportunity in the spring of 1792 to visit France once more, although his father’s attempt to obtain for him the post of attaché in Paris proved unsuccessful. In June 1792 he sailed from the Downs with a companion, Captain John Markham, to arrive at Quebec on 13 August where he and his friend were invited to play cricket on the Heights of Abraham. From there they proceeded to Montreal, Niagara, Lake Ontario and Albany, and it would seem likely that he was back home by Christmas.

Following the commencement of the French Revolutionary War in early 1793 Garlies was appointed to the bomb Vulcan 8 on 18 April, although again it is not clear that he took her to sea, for he was posted captain on 30 April of the Narcissus 20 for purposes of rank only. At the end of June he travelled to Spithead to assume the command of the Sheerness 44 for employment in the Channel, and having seen some service at sea he arrived back at Portsmouth on 19 October.

Towards the end of October 1793 he exchanged with Captain Richard Fisher into the thirty-year-old frigate Winchelsea 32 shortly after a mutiny aboard that vessel had seen two ringleaders sentenced to a flogging around the fleet with punishments of two hundred lashes each. She departed Cork on 24 November under the orders of Captain John Henry of the Irresistible 74 with a convoy of troops for the Leeward Islands, and Garlies served ashore with the naval brigade at the capture of Martinique during the campaign that had begun under Vice-Admiral Sir John Jervis in January 1794. On 1 April he superintended the troop landings on St. Lucia, and on 11 April he landed an advance party of troops at Grozier Bay on Guadeloupe, having the misfortune to be the only man wounded on that occasion when he received a contusion to the face, although he was not left with any disfiguration.

Upon returning to England from Guadeloupe on 20 August, the Winchelsea sailed early in the following month to attend the Royal Family on their annual holiday at Weymouth. After arriving back at Portsmouth from that duty on 4 October she was paid off in November, at which time Garlies with all of his officers and crew transferred to the new eighteen-pounder frigate Lively 32.

In early 1795 Garlies took leave of absence due to political reasons, for although he had resigned his parliamentary seat at Saltash in favour of his brother William in February, his duties as the High Sheriff of the County of Kirkcudbright, which he had assumed three months beforehand, saw him called to account in Parliament for his failure to enact a writ for the election of an M.P for Kirkcudbright. His explanation that a month of heavy snowfall had prevented the electors from registering their votes did not sit well in Parliament, and he was summoned to attend the House of Commons within a fortnight. In the meantime, on 2 March, his frigate under the temporary command of Commander George Burlton captured the French corvette Espion 18 off Brest and had a more significant success on 13 March with the capture of the Tourterelle 28.

By the end of July 1795 Garlies was back in command of the Lively, at which time she arrived at Cork from a cruise, and from where she delivered transports laden with hay to the army in Quiberon Bay. It was then announced that she would give passage out to the Mediterranean to the newly appointed commander-in-chief, Admiral Sir John Jervis, and she reached San Fiorenzo Bay from Portsmouth on 30th November. In 1796 Garlies led a squadron which evacuated British subjects and emigres following the French incursion into Tuscany, and he also had some success cruising, for in early February 1797 a prize to the Lively named as the Spanish merchantman Santa Natolia arrived in the Thames with her cargo of indigo and dollars, having been captured on passage from Omoa to Cadiz. This vessel was reported to be the second most valuable prize taken in the war to date after the St. Jago in 1793.

On 25 January 1797 Garlies led a squadron of three frigates and a sloop which were beaten off in an attack upon the Spanish sail of the line San Francisco de Asis 74 off Cadiz, and following the Battle of Cape St. Vincent on 14 February she returned to England with Captain Sir Robert Calder, the bearer of the victorious despatches, together with another eminent passenger, Lord Minto, the Viceroy of Corsica. Upon arriving home Garlies left the Lively to marry, and he spent the next two and a half years on the beach.

He was next appointed to the newly launched frigate Hussar 38 at Woolwich at the beginning of October 1799, seeing duty in the escort of convoys, and on the Irish station. His command recaptured the packet Princess Charlotte in May 1800, which had been bound from Falmouth to New York, and which was sent into Cork, and in November she entered Portsmouth to repair damage sustained in storms which had seen her go aground near Hayling Island. On 9 January 1801 the Hussar left Portsmouth to escort the outward-bound East India convoy to Madeira, and after capturing the French privateer Général Bessieres, bound from Bordeaux to Saint-Domingue, on 2 March to the east of the Azores, she entered Cork eleven days later before leaving that port in May for Portsmouth.

Garlies was appointed to the ship of the line Bellerophon 74 at Portsmouth towards the end of June 1801, which spent some weeks in port waiting to be manned, and she finally went out of harbour in the middle of August to sail for Plymouth, from where she put out on the 29th to join the Channel Fleet. After serving off Brest until November Garlies resigned the command to Captain John Loring when the Bellerophon was ordered out to the West Indies.

Having not been immediately re-employed following the resumption of hostilities in 1803, he arrived at Portsmouth towards the end of June 1804 to commission the Ajax 74, whose crew was completed by the turning over of men from the Gibraltar 80, Captain George Ryves, which had recently returned from the Mediterranean. On 5 August his new command went out of harbour for Spithead, from where she sailed at the end of the month for Plymouth to take on bullocks for the Channel Fleet. In January 1805 off the coast of Spain she captured a richly laden homeward-bound Spanish vessel from Havana, the Santa Thomaso, which she sent into Plymouth. By this time Garlies’ health was not of the best, and after she entered Plymouth from Ferrol on 13 March he handed over temporary command of the Ajax to Captain Christopher Laroche.

When Lord Barham was appointed the first lord of the Admiralty on 30 April 1805 he selected Garlies as one of his junior lords, and on 22 July the latter re-entered Parliament as the M.P. for Cockermouth. He proved to be a dedicated board member, perhaps zealously, for on one occasion he was forced to apologise by William Pitt for remarks that he had made to Admiral James Gambier. A change of government saw him leave the Admiralty in February 1806, but he remained an active parliamentarian, speaking frequently over the next few months. He was elected the M.P. for Haslemere in the general election of 1806 but he did not take up the seat as the death of his father on14 November, facilitated his entry to the House of Lords. Soon however, he lost interest in politics as he came to the conclusion that it was a dirty business.

The new Earl of Galloway was advanced to flag rank on 31 July 1810, nominated to the Order of the Thistle in 1814, appointed vice-president of the Board off Agriculture in 1815, promoted vice-admiral on 12 August 1819, and elevated to the rank of admiral on 22 July 1830.

Galloway died at Hampstead on 27 March 1834, being succeeded in his titles by his eldest son, The Rt. Hon. Randolph Stewart. He was interred in the New General Cemetery on the Harrow Road.

On 18 April 1797 in London, he married Lady Jane Paget, the second daughter of Henry 1st Earl of Uxbridge, and the sister to, amongst others, the future Vice-Admiral Sir Charles Paget. The couple had issue four sons and four daughters, with his youngest son, Hon. Keith Stewart, born in 1814, entering the Navy in 1827 and being promoted captain in 1842 before reaching the rank of vice-admiral. His eldest daughter, Lady Jane Stewart, married George Spencer-Churchill, the 6th Duke of Marlborough. During 1800 his seat was in Coolhurst, near Horsham, Sussex.

Garlies was described as ‘remarkably clever and agreeable’ and he spoke French fluently. An independent thinker, he was not on good terms with his father and was inclined to make his own way in the world. The future prime minister, George Canning, described him as ‘sensible and good humoured’. At the time of his appointment to the Admiralty he was described as ‘an excellent man, but of warm and sanguine temperament’.